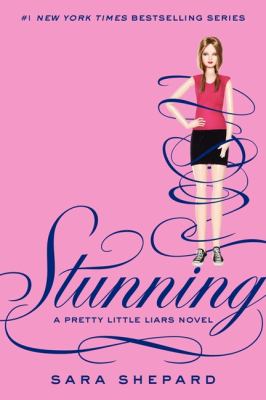 DDC classification: [Fic] Summary: Struggling to return to normalcy after surviving Alison's attempt to kill them, Spencer, Aria, Emily and Hanna endure a series of disasters before realizing that they are being stalked by a new "A" who knows all of their secrets.
Tags from this library: No tags from this library for this title. Log in to add tags.
Fiction notes: Click to open in new window
Total holds: 0

<p>#1 New York Times bestselling series</p> <p>The eleventh book in the #1 New York Times bestselling series that inspired the hit ABC Family TV show Pretty Little Liars.</p> <p>Emily's reconnecting with an old flame, one baby step at a time. But is she headed toward true love or another bundle of heartache? Spencer's learning about the highs and lows of campus life on a trip to Princeton. Aria's seeing a whole new side to Noel's dad--and it could drive a wedge between her and Noel. And, for better or worse, Hanna's getting in touch with her inner A. Secret by secret, lie by lie, the girls get tangled in A's dangerous web. Soon A will have enough ammunition to pull the trigger and end the pretty little liars, once and for all....</p> <p>Full of unexpected twists and shocking revelations, Stunning is the eleventh book in New York Times bestselling author Sara Shepard's compelling Pretty Little Liars series. </p> <p> </p>

Struggling to return to normalcy after surviving Alison's attempt to kill them, Spencer, Aria, Emily and Hanna endure a series of disasters before realizing that they are being stalked by a new "A" who knows all of their secrets.

This entry in the Pretty Little Liars series steps up the typically complex suspense with one plot thread involving Emily's newborn baby and another featuring Aria's discovery that her boyfriend's father is a cross-dresser. More typical of this series, other elements involve Spencer's travails along the route to finding an in-crowd as an early-admissions student at Princeton and Hanna's role in her father's political campaigning. Fans of the series already know that suspension of disbelief is a prerequisite for enjoyment. As ever, the mysterious A remains the ominous texting threat, pulling the strings in the four friends' efforts to straighten out their lives.--Goldsmith, Francisca Copyright 2010 Booklist
More book reviews at iDreamBooks.com