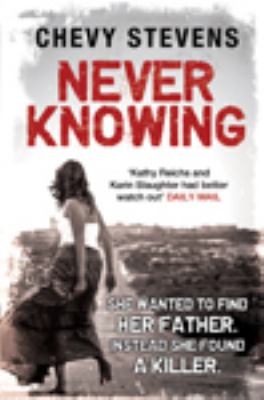 At 34 Sara Gallagher is happy. Her furniture restoration business is taking off and she's engaged to a wonderful man. Now she wants to find her birth parents. But Sara's mother rejects her - again - and her father turns out to be an infamous killer who's been slaying women every summer for over 30 years.

"She wanted to find her father. Instead she found a killer." --Cover.

At thirty-four Sara Gallagher is finally happy with her life, but there is one big question that still haunts her - who are her birth parents? Finally ready to hear the truth, Sara discovers that some questions are better left unanswered: her biological father is an infamous serial killer, a wanted man who has been slaying women for over thirty years. And now he has a daughter. Sara soon realises that the only thing worse than finding out your real father is a killer is him finding out about you...

At thirty-four Sara Gallagher is finally happy with her life, but there is one big question that still haunts her - who are her birth parents? Finally ready to hear the truth, Sara discovers that some questions are better left unanswered: her biological father is an infamous serial killer, a wanted man who has been slaying women for over thirty years. And now he has a daughter...

Stevens's debut, Still Missing, was a word-of-mouth (and critical) success. Her second thriller once again uses a flashback structure to set a suspenseful mood. Her protagonist, Sara Gallagher, tells her story in sessions with a therapist. Given up for adoption as a newborn, Sara has always felt the abandonment keenly, not least because her adoptive father seems to value her less than his two biological daughters. Now Sara has the chance to learn who her birth mother is. Though she is happily engaged and the mother of a six-year-old daughter, Sara needs to know-to an annoying degree. But her birth mother wants nothing to do with her and in fact seems somehow frightened of Sara. Undeterred, Sara continues to investigate and opens up a hornet's nest when she learns her birth father is a serial killer still on the loose. VERDICT Still Missing was such a strong debut, but everything that worked in that first novel has the opposite effect this time around, making the plot feel forced and the heroine unlikable. That said, this is a book fans will be anticipating, so some copies are a must. [A 150,000-copy first printing; library marketing; see Prepub Alert, 1/24/10.]-Jane Jorgenson, Madison P.L., WI (c) Copyright 2011. Library Journals LLC, a wholly owned subsidiary of Media Source, Inc. No redistribution permitted.

Stevens's unnerving stand-alone thriller about a woman's search for her birth parents matches the intensity of her impressive debut, Still Missing. Growing up on Vancouver Island, Sara Gallagher felt emotionally detached from her adoptive family. Now 33, Sara finally locates her birth mother, university professor Julia Laroche, but is devastated when Julia wants nothing to do with her. Sara learns that she was conceived when her birth mother was attacked by the Campsite Killer, a serial killer responsible for a 40-year reign of terror, who has never been caught. When the circumstances of Sara's birth become public, her biological father contacts her, demanding to meet her and her six-year-old daughter. If she refuses, he will continue to kill. Stevens chillingly portrays a woman searching for her identity who's not just horrified by the results but fearful she or her child has inherited violent tendencies. While the plot flirts with cliches, the skillful storytelling never flags. 150,000 first printing. (July) (c) Copyright PWxyz, LLC. All rights reserved.

Expectations are riding high for Stevens' second novel, after the breakout success of her debut, Still Missing (2010). The setup is tantalizing. Sara Gallagher has always known she was adopted, but she suddenly feels a sense of urgency about tracking down her birth parents, not only because she is about to marry the love of her life but also because she is the mother of a six-year-old and would at least like to know her own medical history. She's on the right track when she discovers that her birth mother is a professor at a local college but is shocked and dismayed when the woman refuses to talk with her. Then Sara learns that her birth mother is the only surviving victim of the notorious Campsite Killer, who was never caught, and that he is her father. When the news is leaked on the web, Sara's life becomes surreal, especially after her birth father starts calling her. Reprising the format of her first novel, Stevens has her heroine breathlessly narrate the events to a therapist; unfortunately, the gambit seems stale the second time around. In addition, a tiresome laundry list of premarital woes, an over-the-top plot twist, and an increasingly strained sense of hysteria mar what could have been a chilling plot. Still, the success of her previous novel will ensure an audience for this one. . HIGH-DEMAND BACKSTORY: Chevy Stevens' debut novel, Still Missing (2010), was a big hit, and her latest, despite the fact that it suffers from the dreaded sophomore slump, will have a 150,000-copy first printing, a reading group guide, and an extensive promotional campaign.--Wilkinson, Joann. Copyright 2010 Booklist

A Canadian furniture refinisher gets much, much more than she bargained for, none of it good, when on the eve of her wedding she decides to search for her birth mother.Sara Gallagher has never exactly been comfortable in her adopted family. Her mother-by-choice is loving and kind, but her relationships with her adoptive father and her two non-adopted sisters are rockier. So it's no wonder that she'd want to celebrate her nuptials to Evan, the rugged outdoorsman who's fathered her own daughter, 6-year-old Ally, by tracking down the mother who gave her up as a baby. All too soon, Sara learns that the art-history professor who calls herself Julia Laroche is actually her mother. So why does Julia demand that Sara stay far away from her? For that matter, why did she change her name from Karen Christianson? Sara soon discovers that her mother is the only woman to survive an assault by the Campsite Killeran assault that occurred exactly nine months before Sara's birth. "I was born in fear," she realizes in horror. But her troubled history is the least of her problems. News of Karen's connection, and Sara's own, to the Campsite Killer swiftly leaks onto a gossip blog, spreads like wildfire and brings Sara's father ("You can call me John for now") into her life in ugly and uncontrollable ways. The man who's murdered some 30 young people had no idea he had a daughter, and he's so eager to cultivate a relationship with herwithout of course allowing the omnipresent Staff Sgt. Sandy McBride and Corp. Billy Reynolds to capture himthat he makes a series of ever more impossible demands, threatening to kill again if Sara doesn't meet each and every one. Worse still, the mounting pressure leaves her feeling more and more like her father the serial killer.As finely calculated in its escalating suspense as Stevens' grueling debut (Still Missing,2010). Only the last twist disappoints.]] Copyright Kirkus Reviews, used with permission.
More book reviews at iDreamBooks.com