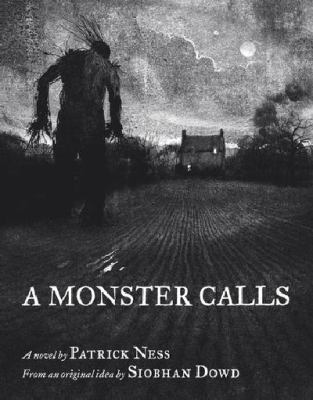 A monster calls / a novel by Patrick Ness ; from an original idea by Siobhan Dowd ; illustrations by Jim Kay.

DDC classification: [Fic.] Awards: Carnegie Medal, 2012 | Kate Greenaway Award, 2012 | Carnegie Award Winner. | Carnegie Award Winner 2012 | Greenaway Award Winner 2012Summary: Thirteen-year-old Conor awakens one night to find a monster outside his bedroom window, but not the one he was expecting. He's been expecting the monster from the recurring nightmare he has had every night since his mother became ill. This monster though, is different: an ancient, wild creature that wants him to face truth and loss. Suggested level: intermediate, secondary.
Tags from this library: No tags from this library for this title. Log in to add tags.
Fiction notes: Click to open in new window
Total holds: 0

The monster showed up just after midnight. But it isn't the monster Conor's been expecting. He's been expecting the one from his nightmare, the one he's had nearly every night since his mother started her treatments. The monster in his back garden, though, this monster is something different. Something ancient, something wild.Winner of the National Book Tokens Children's Book of the Year Award 2011.

Thirteen-year-old Conor awakens one night to find a monster outside his bedroom window, but not the one he was expecting. He's been expecting the monster from the recurring nightmare he has had every night since his mother became ill. This monster though, is different: an ancient, wild creature that wants him to face truth and loss. Suggested level: intermediate, secondary.

In his introduction to this profoundly moving, expertly crafted tale of unaccountable loss, Ness explains how he developed the story from a set of notes left by Siobhan Dowd, who died in 2007 before she had completed a first draft. "I felt-and feel-as if I've been handed a baton, like a particularly fine writer has given me her story and said, 'Go. Run with it. Make trouble.' " What Ness has produced is a singular masterpiece, exceptionally well-served by Kay's atmospheric and ominous illustrations. Conor O'Malley is 13. His mother is being treated for cancer; his father, Liam, has remarried and lives in America; and Conor is left in the care of a grandmother who cares more for her antique wall clock than her grandson. This grim existence is compounded by bullies at school who make fun of his mother's baldness, and an actual nightmare that wakes Conor, screaming, on a recurring basis. Then comes the monster-part human, part arboreal-a hulking yew tree that walks to his window just after midnight and tells three inscrutable parables, each of which disappoints Conor because the good guy is continually wronged. "Many things that are true feel like a cheat," the monster explains. In return for the monster's stories, Conor must tell his own, and the monster demands it be true, forcing Conor, a good boy, a dutiful son, to face up to his feelings: rage and, worse still, fear. If one point of writing is to leave something that transcends human existence, Ness has pulled a fast one on the Grim Reaper, finishing the story death kept Dowd from giving us. It is a story that not only does honor to her memory, it tackles the toughest of subjects by refusing to flinch, meeting the ugly truth about life head-on with compassion, bravery, and insight. Ages 12-up. (Sept.) (c) Copyright PWxyz, LLC. All rights reserved.

Gr 7 Up-Patrick Ness takes a tale inspired by the late Siobhan Dowd and turns it into a deeply moving and magical novel (Candlewick, 2011). Is 13-year-old Conor O'Malley imagining that the yew tree is thundering down the hill to tell him scary stories? Or are the pressures of his mother's cancer and bullying classmates distorting his perceptions? Despite his mother's rapid decline, Conor doesn't expect help from his divorced father now living in America or want his stern grandmother's assistance. The gruff, living nightmare appears when the clock says 12:07, usually in the dark of night, but once at school lunch. Sometimes destructive acts happen during these visits, but other times Conor encounters terrifying images of his mother slipping over a cliff. The boy keeps trying to sort through his fears, denial, and loneliness. When his mother starts on a last ditch treatment using medicine from yew trees, Conor wants to believe she will recover. The ultimately supportive monster helps Conor face the truth as the teen painfully lets go. Narrator Jason Isaacs expertly runs the emotional gamut from the powerful and vociferous yew tree monster to the tender weakness of Connor's dying mother. He solidly captures the mood swings of the angry, frightened young man. At the conclusion of the tale, an interview with Ness explores the novel's development. The bonus CD contains Jim Kay's pen-and-ink arwork that reflects the mood of the tale. This fine audiobook offers unvarnished truth wrapped in fluid prose and cushioned with fantasy. A highly recommended addition to public, middle, and high school libraries.-Barbara Wysocki, Cora J. Belden Library, Rocky Hill, CT (c) Copyright 2012. Library Journals LLC, a wholly owned subsidiary of Media Source, Inc. No redistribution permitted.

*Starred Review* After the stylistic feats and dumbfounding originality of Ness' Chaos Walking trilogy, this follow-up effort comes as something of a surprise an earthbound story concocted from a premise left behind by the late Siobhan Dowd. As Conor watches his mother succumb to cancer, he is pummeled by grief, anger, isolation, helplessness, and something even darker. At night, when he isn't trapped in a recurring nightmare too terrible to think about, he is visited by a very real monster in the form of a giant yew tree. The monster tells Conor three ambiguous, confusing stories, then demands a final one from the boy, one tha. will tell me your truth. Meanwhile, Conor's mom tears through ineffective treatments, and Conor simmers with rage. Everybody always wants to have a talk lately. But all that really happens is a lot of pussyfooting around the central, horrible fact that his mother is dying, and what does the monster mean abou. the trut. anyway? A story with such moribund inevitability could easily become a one-note affair or, worse, forgettable but small, surgically precise cuts of humor and eeriness provide a crucial magnifying effect. Moreover, Ness twists out a resolution that is revelatory in its obviousness, beautiful in its execution, and fearless in its honesty. Kay's artwork keeps the pace, gnawing at the edges of the pages with thundercloud shadows and keeping the monster just barely, terribly seeable. Sidestepping any trace of emotional blackmail, Ness shines Dowd's glimmer into the deepest, most hidden darkness of doubt, and finds a path through.--Chipman, Ia. Copyright 2010 Booklist

Author Ness weaves a haunting tale of pain and redemption as narrator Isaacs imbues each strand with realism and magic, transporting listeners into the consciousness of Conor O'Malley, as the thirteen-year-old-boy faces the death of his mother from cancer. Isaacs removes all perception of actor or author, becoming the pure voice of storytelling, shifting from honest characterizations of Conor, his teenage peers, and the emotionally conflicted adults in his life to the sonorous mysticism of the Monster, whose midnight visits compel Conor to confront the truth of his emotions. This audiobook edition contains an interview with the author plus a bonus disc with illustrations from the book and accompanying audio excerpts. An essential title for every audio collection. mary burkey (c) Copyright 2012. The Horn Book, Inc., a wholly owned subsidiary of Media Source, Inc. No redistribution permitted.

From a premise left by author Siobhan Dowd before her untimely death, Ness has crafted a nuanced tale that draws on elements of classic horror stories to delve into the terrifying terrain of loss.When a monster in the form of an ancient yew tree crashes through his bedroom walls after midnight, calling his name, Conor is remarkably unperturbed"Shout all you want," he says. "I've seen worse." Indeed he has, in a recurring nightmare of someone slipping from his grasp, a nightmare whose horror he keeps to himself. Daily life is intolerable, as everyone from teachers to bullies treats him as though he were invisible since his mother began chemotherapy. The monster tells Conor three stories before insisting that Conor tell one himself. Asserting that "stories are the wildest things of all," the monster opens the door for Conor to face the guilty truth behind his subconscious fears. Ness brilliantly captures Conor's horrifying emotional ride as his mother's inevitable death approaches. In an ideal pairing of text and illustration, the novel is liberally laced with Kay's evocatively textured pen-and-ink artwork, which surrounds the text, softly caressing it in quiet moments and in others rushing toward the viewer with a nightmarish intensity.A poignant tribute to the life and talent of Siobhan Dowd and an astonishing exploration of fear.(Fiction. 11-14)]] Copyright Kirkus Reviews, used with permission.
More book reviews at iDreamBooks.com