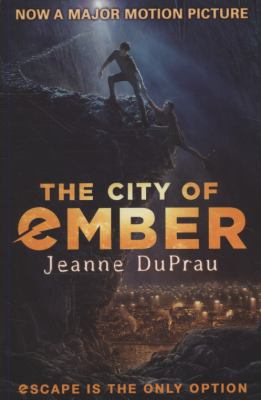 The city of Ember

The city of Ember was created to contain everything needed for survival. But now everything is failing, even the lights. When Lina and Doon discover fragments of an ancient parchment, they wonder if there could be a way out of Ember. Can they decipher it and find a new future for everyone.

Originally published: London: Doubleday, 2004. -Many hundreds of years ago, the city of Ember was created by the Builders to contain everything needed for human survival. It worked - but now the storerooms are almost out of food, crops are blighted, corruption is spreading through the city and worst of all - the lights are failing. Soon Ember could be engulfed by darkness-But when two children, Lina and Doon, discover fragments of an ancient parchment, they begin to wonder if there could be a way out of Ember. Can they decipher the words from long ago and find a new future for everyone? Will the people of Ember listen to them?

Gr 4-7-This truly superb audio recording of the novel by Jeane DuPrau (Random, 2003) takes place in the dark city of Ember, a decaying place with no natural light surrounded by the vast Unknown. Although ancestors had arranged for information on leaving Ember to be made available after the inhabitants have spent 200 years there, a corrupt mayor lost the information many years before the novel begins. Two hundred and forty-one years later, Ember's electrical lighting frequently fails, supplies are dwindling, and the populace is growing increasingly frightened. Twelve-year-old Doon and his acquaintance Lina are intent on finding a way to save Ember. After Lina finds a mysterious and fragmented paper titled "Instructions for Egress," they think they have a way out. Can they escape from the villainous mayor and his soldiers? Can they figure out the missing letters and words in the message? Do they find their way out of Ember and up to a post-apocalyptic Earth? Wendy Dillon, one of the most talented readers of audiobooks, does an amazing job of creating different voices for each character, has absolutely perfect diction, and skillfully conveys the building suspense. Exceptional care has been taken to faithfully convey the author's excellent tale through a combination of a superior narrator and evocative sound effects. This engaging novel is an exceptional audiobook.-B. Allison Gray, John Jermain Memorial Library, Sag Harbor, NY (c) Copyright 2010. Library Journals LLC, a wholly owned subsidiary of Media Source, Inc. No redistribution permitted.

Gr. 5^-7. Ember, a 241-year-old, ruined domed city surrounded by a dark unknown, was built to ensure that humans would continue to exist on Earth, and the instructions for getting out have been lost and forgotten. On Assignment Day, 12-year-olds leave school and receive their lifetime job assignments. Lina Mayfleet becomes a messenger, and her friend Doon Harrow ends up in the Pipeworks beneath the city, where the failing electric generator has been ineffectually patched together. Both Lina and Doon are convinced that their survival means finding a way out of the city, and after Lina discovers pieces of the instructions, she and Doon work together to interpret the fragmented document. Life in this postholocaust city is well limned--the frequent blackouts, the food shortage, the public panic, the search for answers, and the actions of the powerful, who are taking selfish advantage of the situation. Readers will relate to Lina and Doon's resourcefulness and courage in the face of ominous odds. --Sally Estes

(Intermediate, Middle School) Unlike the rundown dystopia of Lois Lowry's Gathering Blue, the darkness of Ember is essentially literal. Its people, by and large, are honorable and civilized; its governance is democratic if quasi-theocratic; its economy frugal but fair. But there is no natural light in Ember, and the blackouts of its antiquated electrical grid are coming more and more frequently: ""running out of light bulbs, running out of power, running out of time--disaster was right around the corner."" So thinks Doon, a curious twelve-year-old who, along with his spirited schoolmate Lina, determines to save the city. On a deliberately limited canvas, first-novelist DuPrau draws a picture of a closed society, all of its resources taken from vast but emptying storerooms, with no travel possible beyond the lights of the city. The writing and storytelling are agreeably spare and remarkably suspenseful, and rather than bogging down in explanations of how Ember came to be and how it functions, DuPrau allows the events of the story to convey the necessary information. There's a contrivance or two in keeping the narrative moving, but even the device of a hidden letter, complete with missing words, is used with such disarming forthrightness that readers will be eagerly deciphering it right alongside Doon and Lina. The two protagonists are good sorts, distinctively if not deeply etched, and fans (note: there will be many) will be pleased to know that while Doon and Lina's mission is triumphantly concluded, there's plenty of room for a sequel. (c) Copyright 2010. The Horn Book, Inc., a wholly owned subsidiary of Media Source, Inc. No redistribution permitted. All rights reserved.

This promising debut is set in a dying underground city. Ember, which was founded and stocked with supplies centuries ago by "The Builders," is now desperately short of food, clothes, and electricity to keep the town illuminated. Lina and Doon find long-hidden, undecipherable instructions that send them on a perilous mission to find what they believe must exist: an exit door from their disintegrating town. In the process, they uncover secret governmental corruption and a route to the world above. Well-paced, this contains a satisfying mystery, a breathtaking escape over rooftops in darkness, a harrowing journey into the unknown and cryptic messages for readers to decipher. The setting is well-realized with the constraints of life in the city intriguingly detailed. The likable protagonists are not only courageous but also believably flawed by human pride, their weaknesses often complementing each other in interesting ways. The cliffhanger ending will leave readers clamoring for the next installment. (Fiction. 9-13) Copyright ©Kirkus Reviews, used with permission.
More book reviews at iDreamBooks.com