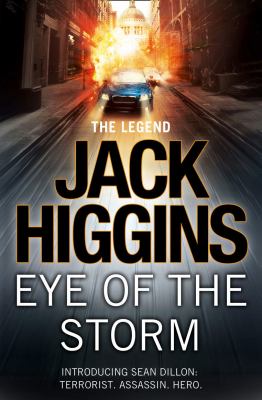 Eye of the storm / Jack Higgins.

Introducing IRA enforcer and deadly assassin, Sean Dillon, in his explosive debut from number one bestselling author, Jack Higgins. A STORM IS COMING... Sean Dillon is a hired killer. The IRA, the PLO, ETA - he's worked for them all. Now, with the Gulf War raging, the Iraqis need his services for an apocalyptic strike at the heart of the West. If it succeeds, it will shake the world to its foundations. Leaders will be wiped out, terror will spread: a devastating blow against democracy. Dillon has 10 Downing Street in his sights but British Intelligence are on his trail. They have hired a killer to stalk a killer - a mortal enemy who is hell-bent on revenge. As the lightning strikes and the bullets fly, Sean Dillon will discover how it feels to be at the eye of the storm...

Higgins's thrillers may evoke a strong sense of deja vu (same basic story, different time frame), but that doesn't seem to diminish the impact of each new novel. Early in 1991, while the Gulf war is in full bloom, operatives of Saddam Hussein hire legendary terrorist Sean Dillon to take the war to the enemy. A master of disguise and subterfuge, Dillon began his career with the IRA, earning the enmity of Liam Devlin--the unforgettable antihero of The Eagle Has Landed , who makes a featured appearance here--and of Martin Brosnan, an American Special Forces hero and IRA member turned college professor. After Dillon's attempt to assassinate former Prime Minister Margaret Thatcher during a visit to France fails, he decides to go after her successor, John Major, and his War Cabinet with a mortar attack on 10 Downing Street. Learning that British Intelligence is recruiting Brosnan to track him down, Dillon confronts his old enemy, a meeting that ends in tragedy and leaves Brosnan bitterly committed to revenge. Although readers can be sure that Dillon's scheme will be foiled, fun remains in the how and why. Standard Higgins in style, plot and resolution, this is bound for bestsellerdom. BOMC feature alternate; Reader's Digest Condensed Books selection; audio rights to Dove. (July) (c) Copyright PWxyz, LLC. All rights reserved

The prolific author of, most famously, The Eagle Has Landed, among other thrillers, here imagines what might have led up to the bizarre February 7, 1991, mortar attack on 10 Downing Street. He speculates that Saddam Hussein, miffed that the coalition pushed Iraq out of Kuwait, seeks vengeance by having some high-ranking western devil offed. George Bush is too well protected, an attempt on Iron Maggie fluffs, so the Iraqis have a go at the new prime minister, John Major, and his cabinet. Their hired hand is another of Higgins' fiendishly talented Irish thugs whose services the IRA can no longer afford and whose thirst for murderous challenges it can no longer satisfy. (The guy's terrific at mayhem, able to knock off a kneecap with his foot while he's perched on a barstool!) His white-clad nemeses are French and English secret-service stalwarts and one reformed IRA man. He plots, they chase, bullets fly. Hardened thriller lovers may be in their element. Novices and dabblers may nod off. (Reviewed May 1, 1992)0399137580Ray Olson

A world-class assassin goes after British PM John Major in Higgins's latest firmly engaging round of speculative derring-do. The Day of the Jackal this isn't, although Sean Dillon--a rogue IRA hit-man who's also a master thespian--is nearly as charismatic a killer as Forsyth's Jackal; and the author's own The Eagle Has Landed it isn't quite either, though Higgins, a diligent literary recycler, revives the spirit, pacing, and even one major player from that 1975 classic. This is the vigorous, rather simple tale of what might have been behind the real-life, still unexplained, mortar attack on Number Ten Downing Street on February 7, 1991. Here, Saddam Hussein, reeling under the allied bombing of Baghdad, asks oily Iraqi billionaire Michael Aroun to avenge Iraqi honor, which Aroun does by joining forces with Stalinist KGB Colonel Josef Makeev and hiring Dillon to blow away Margaret Thatcher, now visiting in France. When Dillon is betrayed by two hirelings and misses his shot at the Iron Lady, he ups the stakes- -why not, he proposes, go after the current PM (here, a most charming chap) and in fact the entire British War Cabinet? Using his Olivier-like powers to pose as several characters, including a bag-lady, and aided by a sexy KGB spy, Dillon sneaks into England, then Ireland, contacts old criminal/IRA pals, and plans. Arrayed against him in an ever-more suspenseful chase are several stalwart British agents, male and female, and two ex-IRA men, including Liam Devlin of Eagle fame. The mortar attack itself has about as much dramatic impact as a hiccup, but Higgins saves his big melodrama for Dillon's attempted escape--which will leave readers happily breathless and waiting for a sequel. The action's so fast, the heroes so valiant, and the villains so blackhearted that not even Higgins's syntax-crunching prose will keep his fans from driving this--his most enjoyable book in years- -up the charts. (Book-of-the-Month Split Main Selection for July)
More book reviews at iDreamBooks.com