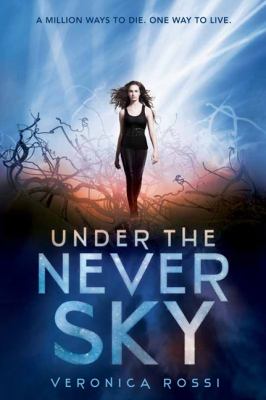 Under the never sky / Veronica Rossi.

| Missing persons -- Young adult fiction | Mothers and daughters -- Young adult fiction | Exiles -- Teenage fiction | Survival -- Teenage fictionGenre/Form: Science fiction. | Young adult fiction. | Romance fiction. | Teen fiction.DDC classification: [Fic] Summary: When Aria is exiled from her enclosed city she knows her chances of surviving in the outer wasteland are slim. Then she meets Perry, a wild savage who doesn't want to help the sheltered Aria. Opposites in nearly every way, Aria and Perry soon realise that they need each other to survive, forming a bond that will determine the fate of all who live under the never sky. Suggested level: secondary.
Tags from this library: No tags from this library for this title. Log in to add tags.
Fiction notes: Click to open in new window

Exiled from her home, the enclosed city of Reverie, Aria knows her chances of surviving in the outer wasteland--known as The Death Shop--are slim. Then Aria meets an Outsider named Perry. He's wild--a savage--and her only hope of staying alive. A hunter for his tribe in a merciless landscape, Perry views Aria as sheltered and fragile--everything he would expect from a Dweller. But he needs Aria's help too; she alone holds the key to his redemption.

In alternating chapters told in Aria's and Perry's voices, Under the Never Sky subtly and powerfully captures the evolving relationship between these characters and sweeps readers away to a harsh but often beautiful world. Continuing with Through the Ever Night and concluding with Into the Still Blue, the Under the Never Sky trilogy has already been embraced by readers in twenty-six countries and been optioned for film by Warner Bros.

When Aria is exiled from her enclosed city she knows her chances of surviving in the outer wasteland are slim. Then she meets Perry, a wild savage who doesn't want to help the sheltered Aria. Opposites in nearly every way, Aria and Perry soon realise that they need each other to survive, forming a bond that will determine the fate of all who live under the never sky. Suggested level: secondary.

Followed by: Through the ever night.

"Savage" tribesman Perry rescues the effete Pod-dweller Aria in Rossi's dystopian debut about an ecological apocalypse. Earth is now ravaged by Aether storms, from which the Dwellers are insulated-at the cost of all freedoms. Aria is cast out of this refuge after a venture into a forbidden greenhouse, where she first meets Perry. The Outsider tribes live exposed to the horrifically magnified elements and suffer from mutations as well as the privations of their Stone Age culture. Predictable culture clashes ensue as Perry introduces Aria to his primitive lifestyle, though Rossi does have some interesting ideas. The Dwellers are kept passive by an elaborate virtual construct called "the Realms," but aside from a few brief scenes, the Realms are merely referred to, not depicted. The focus is on Aria's response to life in "the real" (and, of course, to Perry), and it's hard to warm up to either. Violent death is endemic to both cultures, and in the tradition of H.G. Wells, neither the Eloi-like Dwellers nor the Morlock-like Outsider tribes are terribly appealing. Agent: Adams Literary. Ages 14-up. (Jan.) (c) Copyright PWxyz, LLC. All rights reserved.

Gr 7 Up-Aria has lived her entire life in the domed city of Reverie. As the story opens, she is sneaking into a restricted area with the security chief's son, Soren, in hopes that he will be able to help her reach her scientist mother, with whom she has lost contact. The son turns strangely violent and Aria only survives his attack by the timely intervention of Peregrine, one of the "Savages" from outside the dome. In order to keep her quiet, Soren's father casts her into the outside world to die. She is saved again by Peregrine, who is on his own quest to rescue his nephew from dome "Dweller" kidnappers. Though from different worlds, the two must work together if they are to prevail in the wilderness. Rossi's novel transcends the bleak category of dystopias to which it technically belongs. There is a luminescence to her characters and world that denies the grim realities of environmental degradation, domed cities, genetic disease, and roaming bands of cannibals. The almost-magical senses that Peregrine and Aria possess allow Rossi to expand her descriptive palette beyond the mundane spectrum to create truly wondrous images. Her action sequences are cinematic in feel while her romance builds from tentative feelings to a powerful bond between Aria and Peregrine. The hopeful ending leaves room for but doesn't necessitate a sequel. Although this is a first novel, it comes across as the work of a master craftsman and should appeal to both teen and adult readers far beyond dystopia fans. Film rights optioned by Warner Bros.-Eric Norton, McMillan Memorial Library, Wisconsin Rapids, WI (c) Copyright 2012. Library Journals LLC, a wholly owned subsidiary of Media Source, Inc. No redistribution permitted.

The wasteland known as the Death Stop is a world away from the safe, sheltered community from which Aria was expelled, but to Peregrine, it's a brutal but familiar home. In this dystopian future, a stark division has grown between the Outsiders, whose senses have sharpened and who have descended into quasi-primitive tribal life, and those living in now-crumbling Pods in an almost exclusively virtual experience. Perry is one of the reasons Aria was expelled, and Aria may be the reason Perry's beloved nephew, Talon, was kidnapped. Needing one another to complete their tasks, though, they forge a cold partnership as they trek across a wilderness stricken with Aether strikes, cannibal attacks, and even more terrifying dangers. Fans of The Hunger Games (2008) will cheer Aria's gradual, warrior-like transformation over the course of the novel. Perry is an enigmatic figure whose past emerges slowly and whose strength of character is only amplified by his flaws. The ending leaves Perry and Aria, who have become passionately drawn together, with significant challenges, teasing readers with the potential of a sequel.--Booth, Heather Copyright 2010 Booklist

Aria knows the history of the destructive Aether storms and plagues that led to her ancestors being some of the fortunate few who were able to shelter in man-made Pods, and she has grown up in the safety of the enclosed city of Reverie enjoying the Realms, virtual-reality spaces where people now spend most of their time. When she is punished (ostensibly for trespassing, though her potential to embarrass an important leader with information about his violent son seems more likely the reason) and exiled to the outside wasteland, she assumes she will die quickly. Aria does survive, though she is certainly not prepared to handle the difficult environment or her newfound knowledge; she learns that decades of spending time in the Realms have led to widespread psychotic breaks, that she is actually half-Outsider, and that there are very few options for those seeking peaceful, loving lives. Aria, who goes from lazy and soft to survivalist razor-edged in a smooth leap, is a memorable protagonist as she battles her own shortcomings with the same ferocity as she fights for the lives of those she loves. The world itself -- sharply divided into garishly surreal Realms, cozy (if bland) Pods, and harsh, unforgiving outside -- is as creatively and lavishly developed as the characters themselves, and readers will likely be left as curious about how each area will develop with this next generation of protagonists who are all too aware of the risks present in all three. april spisak (c) Copyright 2012. The Horn Book, Inc., a wholly owned subsidiary of Media Source, Inc. No redistribution permitted.