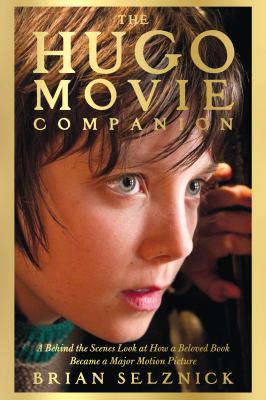 The Hugo movie companion : a behind the scenes look at how a beloved book became a major motion picture / by Brian Selznick ; with additional material by Martin Scorsese and David Serlin ; photography by Jaap Buitendijk.

This heavily illustrated, full-color, elegant hardcover closely resembles the look and feel of Brian Selznick's groundbreaking debut novel, The Invention of Hugo Cabret . With interviews of key people behind the making of the film; side-by-side visual comparisons of artwork from the book and people, props, costumes, and sets from the movie; as well as information about automatons, early cinema, special effects and 3D technology, and more!

Visually stunning and filled with fascinating information, The Hugo Cabret Companion will mesmerize and delight as it extends the experience of the movie and the book. A must-have for fans of all ages!

A brief introduction -- The original book -- The director and his vision -- Assembling the team -- Lights! Camera! Design! -- Filming begins -- The party -- Winding it up.

A brief introduction -- The original book -- The movie makers -- The director and his vision -- Assembling the team -- Design and technology -- Filming -- The party -- Winding it up.

"Brian Selznick takes readers on an intimate tour of the movie-making process as his Caldecott Award-winning book The Invention of Hugo Cabret is turned into a 3-D major motion picture by Academy Award-winning director, Martin Scorsese, written by Academy Award-nominated screenwriter, John Logan."--Amazon.com.