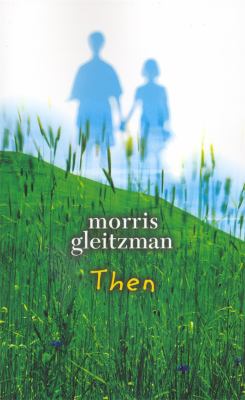 Then the Nazis came

"Then is the second story of Felix and Zelda. They escaped from the Nazis, but how long can they now survive when there are so many people ready to hand them over for a reward? Thanks to the courage of a kind, brave woman they are able to hide for a time in the open, but Felix knows he has a distinguishing feature that identifies him as a Jew and that it is only a matter of time before he is discovered, which will mean death for them all. Even though he promised Zelda he would never leave her, he knows he has to, before it is too late..."--Provided by publisher.

This harrowing sequel to Once picks up the story of 10-year-old Felix and six-year-old Zelda after their leap from a train carrying Jews to a concentration camp. Once again, Gleitzman captures horrors through the lens of childhood: a mass grave of orphans who have been shot; the bodies of Germans who helped Jews, hanging in the town square; the cruelty of Nazi soldiers taking farmers' animals and livelihoods. Courage and kindness combat these evils as caring adults and sympathetic strangers find ways to shelter, provide for, and protect the children despite obvious risks. Felix continues to use his storytelling skills for survival: inspired by novelist Richmal Crompton, to whom he prays for guidance and protection, Felix constructs alternate identities for himself and Zelda, which allow them to hide in public, for a time. Both children seek to protect each other with a locket showing Zelda's Nazi parents, each secretly putting it back in the other's possession. In a conclusion both devastating and hopeful, the innocence and maturity of Felix's narrative voice conveys human resilience when faced with the impossible. Ages 12-up. (May) (c) Copyright PWxyz, LLC. All rights reserved.

Gr 6-9-Jewish orphans Felix and Zelda are just escaping from a train taking them to a concentration camp when they hear shots. After many more ring out, they discover a mass grave filled with bodies of children. Starting with the word "Then," each chapter moves the story forward as Gleitzman picks up where Once (Holt, 2010) left off. Ten-year-old Felix, the storyteller, continues to try to reinvent reality for six-year-old Zelda, whose skepticism and feistiness are undiluted. He wants to protect her, but by doing so, she is terrifyingly outspoken, and her usual "Don't you know anything?" shows her scorn for the hapless beliefs that he is trying to sell her. In the Polish countryside and small village, the children find good and kind people, as well as those who intend harm. Unfolding events are deadly. The danger, the evil, and the need to pretend to comply when asked to appear in the town square to witness more horror contrasts with Felix's childlike thoughts as he makes choices about how to survive. While still a child, all of his innocence is gone by the end, and Felix has learned the power of memory. While the protagonists are young, this book is for older readers as it spares nothing in its imaginings of the losses and horror that were the Holocaust.-Carol A. Edwards, Denver Public Library, CO (c) Copyright 2011. Library Journals LLC, a wholly owned subsidiary of Media Source, Inc. No redistribution permitted.

After their escape from a train bound for a death camp, orphans Felix, 10, and Zelda, 6, are on the run from the Nazis in Poland in 1942. His parents were Jewish, and he must hide his identity. Her parents were Nazis, murdered by the Polish Resistance, and she must overcome her shame as well as her sorrow. True to Felix's viewpoint bewildered by the horror; protective of sharp, furious Zelda this terse stand-alone sequel to Once (2010) tells how the young people find shelter with a local woman, who risks death when she hides them. Nearby is the mass grave where piles of the dead from a local Jewish orphanage were thrown. When the children are forced to witness the public hanging of Jewish rescuers, Felix decides to flee again so that he does not put his new family at risk. There is no triumphant climax, and right up until the shocking end, the story of hidden children will grab readers with its details of the daily tension of rescue and betrayal.--Rochman, Haze. Copyright 2010 Booklist

Picking up immediately where Once (rev. 3/10) left off, Felix, ten, and Zelda, six, successfully escape from the train bound for Treblinka only to find themselves stumbling onto a mass grave of Jewish children in the Polish countryside and in immediate danger from Nazi soldiers eager to find and kill them. As in the first book, Felix's present-tense narrative is heartfelt, and the horrors of the setting are balanced with unashamedly propulsive storytelling. The children find refuge with Genia, an outwardly tough Polish farmwife who, dyeing their hair and making them memorize new names and autobiographies, passes them off as visiting relatives. When Felix, anachronistically and at some length, attempts to cure Zelda of her hatred for her dead Nazi parents via art therapy, the story stalls, and in any case her successful rehabilitation is for naught: in the book's climax, Felix finds Zelda and Genia, betrayed by a neighbor, hanging in the village square. "The breeze turns them gently, and now they're facing me." Historically honest, but brutal, to be sure. roger Sutton (c) Copyright 2011. The Horn Book, Inc., a wholly owned subsidiary of Media Source, Inc. No redistribution permitted.

Sequel to the searing Once (2010), this tale of young people trying to survive in Poland during World War II is equally powerful. This title picks up where the first book ended, with narrator Felix and companion Zelda, 10 and six respectively, fleeing from a death-campbound boxcar. In the course of their flight there is always the danger of being turned in to the Nazis for a reward, as well as the imminent peril of being shot or starving to death. Taken in by a Polish woman, the children have a home, but danger is everywhere, especially for Felix, who is tormented by a sadistic boy determined to strip him to see if he is circumcised. If he uncovers a Jew, the boy will claim a reward, and Felix, Zelda and Genia, the farm wife, will be shot. Throughout, Felix takes comfort in the humorous tales of his favorite author, Richmal Crompton, a British writer. These references provide necessary light moments in a book that shows the passage of the children from innocence to terrible reality: There seem to be no happy endings for Felix. Despite all the grinding misery and the moments of sheer terror, Felix retains his humanity, and a reader surely must walk with the protagonists on their long and tortured journey. (Historical fiction. 10 up)]] Copyright Kirkus Reviews, used with permission.
More book reviews at iDreamBooks.com