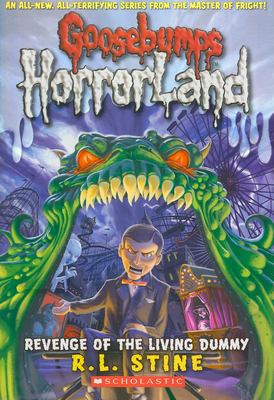 12-year-old Britney Crosby's nightmare begins when she meets an old ventriloquist's dummy harboring an evil plan. She receives an invitation to an amusement park with an erie atmosphere accurately named, HorrorLand. Who sent the invitation and why are they luring normal kids to this wicked place? If Britney can't solve the mystery fast...she and her friends may be trapped there forever.

Britney battles against her cousin's new ventriloquist dummy and discovers a frightening secret in a new amusement park called HorrorLand.

After eight years, the bestselling master of middle-grade horror returns, this time with the first book of a new, deliciously chilling 12-book series. As is planned for the other titles, this suspenseful opener is broken into two equally enjoyable sections--a standalone story and the first installment of what already reads like a ghostly serial at its spookiest. In the same tried-and-true style as the older Goosebumps stories, the standalone involves two smart yet vulnerable kids as they try to bury "Mr. Badboy," an evil ventriloquist's dummy with a mind of its own, and a Mumban doll with a shrunken human head that steals minds when touched, before the two dolls can do any major damage. In Part Two, the same characters embark on another petrifying adventure to a mysterious theme park advertised as "HorrorLand: Where Nightmares Come to Life." All the essential tricks of the trade to keep readers up at night are front and center: the ominous noises at just the right moments, the grisly visual descriptions and the cliffhangers around every corner. Combined with the promise of an ongoing story, this series should easily garner a new crop of scare-addicts. Ages 8-12. (Apr.) (c) Copyright PWxyz, LLC. All rights reserved

Gr 3-6-Alissa Hunnicutt does a more than capable job reading these two related stories (Scholastic, pap. 2008) by R.L. Stine. In the first story, Hunnicutt superbly conveys the mounting fear that Britney Crosby feels towards her cousin Ethan's creepy old ventriloquist's dummy named Slappy, voicing him to sound like Donald Duck gone psycho. Of course, she has every reason to be terrified of the wooden sociopath, and she and a friend try to get rid of the cursed item. As usual, her parents don't believe her, sand this comes back to haunt them in the second story. The Crosby family and Britney's best friend go to Horrorland for a vacation. While most people might have suspected something weird was happening, the family falls for it hook, line and sinker. Stine ups the chills level by concluding the second story with the girls realizing that Britney's parents have disappeared, and Slappy is responsible. The abrupt ending leaves no doubt that the girls are doomed to the nasty fate hinted at in the Horrorland story. Effective and nearly constant sound effects enhance the telling and increase the tension. This production will definitely be a hit with the author's fans and listeners who relish scary tales.-B. Allison Gray, Santa Barbara County Library, CA (c) Copyright 2010. Library Journals LLC, a wholly owned subsidiary of Media Source, Inc. No redistribution permitted.
More book reviews at iDreamBooks.com