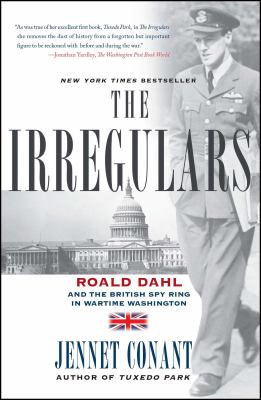 Now in paperback, and following her extraordinary, bestselling, and much-acclaimed accounts of the most guarded secrets of the Second World War, here is a rollicking true story of spies, politicians, journalists, and intrigue in the highest circles of Washington during the tumultuous days of World War II.

When Roald Dahl, a dashing young wounded RAF pilot, took up his post at the British Embassy in 1942, his assignment was to use his good looks, wit, and considerable charm to gain access to the most powerful figures in American political life. Better than any spy fiction, The Irregulars is a fascinating, lively account of deceit, double dealing, and moral ambiguity--all in the name of victory. Richly detailed and carefully researched, Conant's masterful narrative is based on never-before-seen wartime letters, diaries, and interviews.

Among the "irregulars" whom Churchill sent to Washington, hoping they would sway isolationist America, was charming RAF pilot Roald Dahl. With an eight-city tour. (c) Copyright 2010. Library Journals LLC, a wholly owned subsidiary of Media Source, Inc. No redistribution permitted.

What could be more intriguing than the young writer Roald Dahl--destined to create such classics as Charlie and the Chocolate Factory--assigned by His Majesty's Government to Washington, D.C., as a diplomat in the spring of 1942, charged with a secret mission? Dahl's brief was to gather intelligence about America's isolationist circles (indeed, he infiltrated the infatuated Claire Boothe Luce in more ways than one) and propagandize for prompt American entry into the European war. The United States had technically been at war with Germany since December 1941. However, the U.S.'s attention was focused mainly on the Pacific theater--and such pro-German political figures as Luce and Charles Lindbergh meant to keep it that way. Dahl's most important job was to influence public opinion generally and the opinions of Washington's powerful specifically. As bestselling author Conant (Tuxedo Park) shows in her eloquent narrative, Dahl's intriguing coconspirators included future advertising legend David Ogilvy and future spy novelist Ian Fleming. Most fascinating, though, is Dahl's relationship with the great British spymaster William Stephenson, otherwise known as "Intrepid." This all boils down to a thoroughly engrossing story, one Conant tells exceptionally well. (Sept.) (c) Copyright PWxyz, LLC. All rights reserved

Conant, the author of two previous books about top-secret stuff the invention of radar and the building of the atomic bomb now takes her readers behind the scenes of the clandestine British intelligence operation in Washington, D.C., during World War II. Under the general direction of the Canadian William Stephenson aka Intrepid British Security Coordination was set up to curry American support for Britain in the early days of the war. Typically, this seems to have taken the form of drinking cocktails and having affairs. The then twentysomething Roald Dahl, who had been invalided out of the RAF and was just starting to make a name for himself as a writer, was only one of a number of stellar types who became involved in this sub-rosa operation; Noel Coward and Ian Fleming also played roles. Part gossip, part history, Conant's book, though much too long, is fitfully amusing in a Vanity Fair sort of way. Most readers will skip the stuff about civil aviation and alphabet-soup agencies, however, and go straight to the gossip, of which there is plenty.--Cart, Michael Copyright 2008 Booklist

The noted children's author was once one of several British agents conducting espionage in the United States. Advertising-titan-to-be David Ogilvy and future James Bond creator Ian Fleming were also members of the group assigned to infiltrate top levels of Washington and New York society to gain information that would help their government push the United States to enter World War II. But Conant (Tuxedo Park, 2002, etc.) focuses on Roald Dahl, who became a spy after a grievous injury ended his career as an RAF pilot. In her enjoyable popular history, she keeps the narrative moving at a brisk pace, including adequate doses of serious information and juicy gossip. She occasionally goes off on tangents and spends too long on some profiles, but she ably captures the complexity and paradox of the era as she depicts the spies' active professional and social lives, which included sexual affairs as well as diplomatic briefings. Dahl's roguish charm and dashing looks helped him become a trafficker of intelligence to British officials and a key provider of leaks to American journalists. Few suspected his secret life. "With his reckless sense of humor and general air of insubordination," the author writes, "Dahl may have been mentioned to someone on high as having the makings of an ideal informant, if for no other reason than no one so badly behaved would ever be suspected of working for British intelligence." While Conant admires the literary skills that Dahl eventually acquired, she abhors his willingness to use and discard people as they became more and less useful to him. Entertaining social history that also reveals a little-known aspect of an important literary figure's life. Copyright ©Kirkus Reviews, used with permission.
More book reviews at iDreamBooks.com