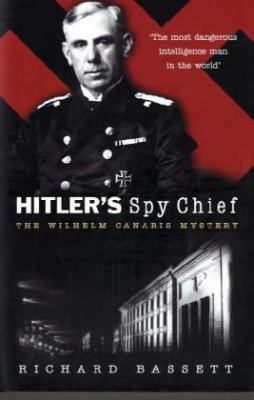 Wilhelm Canaris was appointed by Hitler to head the Abwehr (the German secret service) eighteen months after the Nazis came to power. But Canaris turned against the Fuhrer and the Nazi regime, believing that Hitler would start a war Germany could not win. In 1938 he was involved in an attempted coup, undermined by British Prime Minister Neville Chamberlain. In 1940 he sabotaged the German plan to invade England, and fed General Franco vital information that helped him keep Spain out of the war. For years he played a dangerous double game, desperately trying to keep one step ahead of the Gestapo. The SS chief, Heinrich Himmler, became suspicious of the Abwehr and by 1944, when Abwehr personnel were involved in the attempted assassination of Hitler, he had the evidence to arrest Canaris himself. Canaris was executed a few weeks before the end of the war.

Wilhelm Canaris was the head of German military intelligence (the Abwehr), 1935-44, when he was dismissed (and later executed) by Hitler as an agent for the Allies. British journalist Bassett presents a highly sympathetic study of Canaris. The old-style head of the Abwehr at first favored the Nazis but came to see Hitler as leading Germany only to catastrophe. Bassett traces Canaris's secret wartime contacts with the British and his work in sheltering anti-Nazi elements as well as attempting to negotiate an anti-Soviet peace with the Western Allies in 1943. This is an accessible book in which Bassett makes clear from the outset that his subject remains ultimately mysterious; there is much about Canaris's wartime dealings that remains to be uncovered and understood. While Canaris wanted to save Germany from destruction, he was essentially conservative and did not necessarily support a democratic government. Bassett has added an author's note to this U.S. edition of his book addressing some of the criticisms it received from British specialists upon its original publication in 2005. Verdict Recommended for all those interested in the grand strategy, secret operations, and what-ifs of the Second World War.-Daniel K. Blewett, Coll. of DuPage Lib., Glen Ellyn, IL (c) Copyright 2012. Library Journals LLC, a wholly owned subsidiary of Media Source, Inc. No redistribution permitted.

A WWI hero, Adm. Wilhelm Canaris specialized in intelligence, remained in the tiny, postwar German navy, and became Hitler's director of military intelligence in 1935. Unlike the typical thuggish Nazi, he was urbane and sophisticated, and former London Times correspondent Bassett presents an intensely researched and admiring biography. Canaris, certain Hitler was leading Germany to disaster, turned against Hitler in 1938, attempting repeatedly to sabotage the fuehrer's military efforts. During the Munich crisis, Canaris and other plotters promised to overthrow Hitler provided Britain threatened war over Hitler's invasion of Czechoslovakia. Chamberlain's appeasement wrecked the scheme. In 1940, Canaris's advice encouraged Franco to deny the Wehrmacht passage through Spain to capture Gibraltar. After France's defeat, he dampened interest in a cross-channel invasion with exaggerated estimates of British defenses In 1944 an increasingly suspicious Hitler dismissed him. Although not part of the failed July 20, 1944, assassination attempt, Canaris was arrested and later executed.. A likable Nazi official seems a contradiction, but Canaris qualifies, and Bassett delivers a fascinating account of his courageous, frustrated, and ultimately tragic life. (July) (c) Copyright PWxyz, LLC. All rights reserved.

A London journalist makes a convincing case for the quietly subversive pro-British diplomacy of the head of the Abwehr. Bassett portrays Admiral Wilhelm Canaris as a German gentleman of the old school who grew to admire the might and prowess of the British navy. Although he was an eager Nazi apparatchik at the beginning, he began to realize the horrors of Hitler's regime and distance himself from them. Canaris started his career with the Imperial German Navy, and he cut his teeth during the Anglo-German naval race of World War I. He showed a flair for intelligence work, with impeccable English and Spanish, and developed connections within the anti-communist segment consolidating in Germany after the war. He found himself in goodly stead with the rising National Socialists led by Hitler, who was obsessed with the British secret service. Canaris' old navy colleague and protg Reinhard Heydrich took over the German Security Service and became a close ally and dangerous rival. Canaris' philosophy in leading the Abwehr seemed to be to "run with the party" while cultivating a degree of "independent thought and action." This ultimately led to his arrest and hanging for treason in April 1945. Bassett carefully considers Canaris' rather uneven record, from his pressure on Hitler to support Franco during the Spanish Civil War, and ability to provide Franco with the key intelligence required to withstand Hitler's wooing of Spain to the Axis side, to his subtle foiling of what he considered repugnant Gestapo activity in Poland and Russia. Bassett's thorough work spotlights this relatively unknown character in the Nazi hierarchy. A welcome addition to the war record and a solid elucidation of the Nazi spy system.]] Copyright Kirkus Reviews, used with permission.
More book reviews at iDreamBooks.com