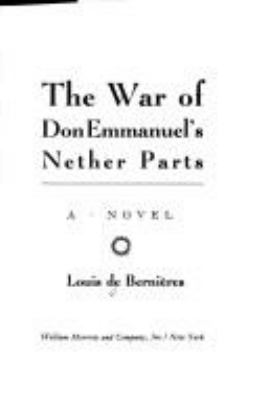 A farcical tragedy inextricably entangled with myth, Louis de Bernieres's brilliant first novel is an intoxicating story of life, love, and politics in South America. The war begins when the haughty Dona Constanza tries to divert the village river to fill her swimming pool, and the ensuing events become more and more weird and funny. Copyright © Libri GmbH. All rights reserved.

This rollicking, disturbing first novel celebrates (or parodies?) the recurrent themes of modern Latin American fiction: politics, corruption, and war; love, sex, and family; nature, religion, and magic. A motley assortment of horrific or hilarious vignettes resolve themselves into an imaginative story set in a troubled, fictional, but familiar South American country. A basically innocent village finds itself the focal point of a clash between a mindlessly brutal military and a nebulous Communist threat. Many trysts and torturings later, the villagers make an exodus to a new Eden, accompanied by sympathetic guerrillas, an Indian guide, and an ever-growing band of large, affectionate cats. As one of the numerous characters points out, ``In this country reason does not apply to anything.'' Recommended for public libraries.-- Janet Ingraham, Worthington P.L., Ohio (c) Copyright 2010. Library Journals LLC, a wholly owned subsidiary of Media Source, Inc. No redistribution permitted.

A blend of scathing political satire and magic realism, De Bernieres's furiously sardonic, intensely lyrical first novel portrays an imaginary, impoverished Latin American country run by an oligarchy, terrorized by fascist army officers and propped up by U.S. support while Yanqui corporations suck its economy dry. No better than the rapacious and murderous military, the revolutionaries loot and kill in the name of an abstract ideal. The motley cast includes Dona Costanza Evans, an upper-class housewife kidnapped by guerrillas, who actively joins the revolution; Olaf Olsen, a Norwegian industrialist whose innocent daughter becomes one of the ``disappeared''; Aurelio, a jungle Indian versed in magic, and Don Emmanuel, oddball son of a progressive English educator. About halfway through, friendly, charming cats, which grow to the size of pumas, invade the narrative and do magical things that confound even fascist generals. De Bernieres, who taught in Colombia, captures the beauty, hope and desperation of Latin America as few other writers have done. (Feb.) (c) Copyright PWxyz, LLC. All rights reserved

When violence is the offspring of power and ignorance, what tactics can a people employ to protect their peace? In this novel--a tragicomedy--dense with mythical allusions, innuendos, and a vast knowledge of cultures, de Bernieres has created a work of both playful amusement and unsettling sobriety. The absurd and comical is juxtaposed with the absurd and tragic as Dona Constanza diverts the Mula River to fill her algae- and frog-infested swimming pool, and Capitan Rodrigo Figueras salvages his humiliated ego by tossing a hand grenade into a crowd of indignant peasants who had denied him the pleasure of raping a young, virgin bride-to-be. Inevitably, the military invades, but the villagers have organized a defense and manage to temporarily deter Capitan Figueras. Aurelio, an Indian in touch with the spirit world, leads the villagers on their exodus into the mountains, where they hope to finally live in peace. A book packed with knowledge, resonating with a life-affirming spirit connected to the land. ~--Christine Schlenker

A first novel by a British writer that, somewhat cynically, seems to want to wrap up all things Latin American into one package: myth, politics, comedy, economics, ethnology, geography, you name it. The result is a synoptic mess, filled more with cartoons than with anything else. In an unnamed and representative Andean country, the benevolent nobleman of the title hangs over the book as the kindest, foggiest deity, watching privilege war with poverty, guerrillas with the army, sexual repression with ``natural'' expression. A Navantes Indian girl is killed by a land mine and becomes transfigured into a cat--a cat who ultimately through magical means brings down the corrupt and bankrupt state kept propped up by financial schemes and a renegade army (a torture machine when it isn't being diverted by Falklands-style war fiascos). But de Bernières, unlike García Márquez and Isabel Allende, his too obvious templates, can't get his scene-lets to nugget or cohere in language that sings: the fabric is patchwork, unsinuous. There is encyclopedic, somewhat condescending filler (``machetes are sharpened assiduously on special boulders in the rivers until they are sharp enough both to shave with and chop down trees. They are used to slaughter animals by decapitation, which is very quick and humane...''), as well as political boilerplate (``Campesinos do not become guerrillas for the same reasons as middle-class intellectuals from towns''), but neither helps forge this into a novel. Synthetic and, worse, mostly a bore.
More book reviews at iDreamBooks.com