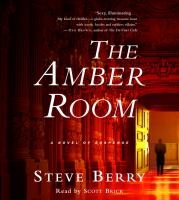 The Amber Room is one of the greatest treasures ever made by man: an entire room forged of exquisite amber, from its four massive walls to its finely crafted furniture. But it is also the subject of one of history's most intriguing mysteries. Originally commissioned in 1701 by Frederick I of Prussia, the Room was later perfected Tsarskoe Selo, the Russian imperial city. In 1941, German troops invaded the Soviet Union, looting everything in their wake and seizing the Amber Room. When the Allies began the bombing of Germany in August 1944, the Room was hidden. And despite the best efforts of treasure hunters and art collectors from around the world, it has never been seen again.

Now, two powerful men have set their best operatives loose in pursuit, and the hunt has begun once more. . . .

Life is good for Atlanta judge Rachel Cutler. She loves her job, loves her kids, and remains civil to her ex-husband, Paul. But everything changes when her father, a man who survived the horrors of World War II, dies under strange circumstances--and leaves behind clues to a secret he kept his entire life . . . a secret about something called the Amber Room.

Desperate to know the truth about her father's suspicious dealings, Rachel takes off for Germany, with Paul close behind. Shortly after arriving, they find themselves involved with a cast of shadowy characters who all claim to share their quest. But as they learn more about the history of the treasure they seek, Rachel and Paul realize they're in way over their heads. Locked in a treacherous game with ruthless professional killers and embroiled in a treasure hunt of epic proportions, Rachel and Paul suddenly find themselves on a collision course with the forces of power, evil, and history itself.

A brilliant adventure and a scintillating tale of intrigue, deception, art, and murder, The Amber Room is a classic tale of suspense--and the debut of a strong new voice in the world of the international thriller.

"A novel of suspense."

When her father dies under suspicious circumstances, a judge finds everything she loves threatened by the rival quests of two art collectors who seek one of the world's greatest treasures, lost after the Second World War.

After an American contractor announces his intention to recover priceless panels that the Nazis stole decades ago from the Amber Room of Russia's Summer Palace, an old man fascinated with the story is brutally murdered. His daughter heads to Europe to ferret out the connection. A splashy debut. (c) Copyright 2010. Library Journals LLC, a wholly owned subsidiary of Media Source, Inc. No redistribution permitted.

First-time novelist Berry weighs in with a hefty thriller that's long on interesting research but short on thrills. Atlanta judge Rachel Cutler and ex-husband Paul are divorced but still care for each other. Rachel's father, Karol Borya, knows secrets about the famed Amber Room, a massive set of intricately carved panels crafted from the precious substance and looted by Nazis during WWII from Russia's Catherine Palace. The disappearance of the panels, which together formed a room, remains one of the world's greatest unsolved art mysteries. Borya's secret gets him killed as two European industrialists/art collectors go head to head in a deadly race to find the fabled room. Searching for Borya's killer, Rachel and Paul bumble their way to Europe, where their naivet? triggers more deaths. Berry has obviously done his homework, and he seems determined to find a place for every fact he's unearthed. The plot slows for descriptions of various art pieces, lectures and long internal monologues in which characters examine their innermost feelings and motives in minute detail, while also packing in plenty of sex and an abundance of brutal killings. A final confrontation between all the principals ends in a looming Bavarian castle where Rachel is raped. All the right elements are in place, but the book is far too long and not as exciting as the ingredients suggest. Readers may end up wishing Berry had written a nonfiction account of the fascinating story of the Amber Room and skipped the fictional mayhem. Agent, Pam Ahearn. (Sept.) Forecast: The Amber Room has been in the news again lately (a long New Yorker piece on its history ran earlier this year), because the panels are presently being re-created for the 300th anniversary of St. Petersburg this year. The attention may spark interest in Berry's debut, but less-than-stellar word of mouth may cause sales to peak early. (c) Copyright PWxyz, LLC. All rights reserved

Give this man credit: whereas most lawyers who decide to write a novel stay fairly close to home, Berry, a Georgia trial attorney, wanders far off the beaten path. Although his debut novel features a trial judge as its central character and opens with a pretty typical courtroom scene, it soon steps outside the courtroom--way outside. When Judge Rachel Cutler's father dies under suspicious circumstances, he leaves his daughter tantalizing clues to a decades-old secret: the Amber Room, an exquisite treasure that, so the legend goes, was appropriated by the Nazis when they invaded the Soviet Union. Now, to find out why her father died, and who's responsible, Rachel (with her ex-husband, Paul) heads off to Germany, where she hopes to find the truth about the Amber Room. Based loosely, very loosely, on certain historical events, the novel is plotted cleverly and written with style and substance. A welcome change from the usual legal-thriller fare from wanna-be Turows. --David Pitt Copyright 2003 Booklist

A hotheaded Georgia judge and her probate lawyer husband do battle with a gang of rapacious art collectors and their murderous gofers, in a first novel by a Georgia trial lawyer. Everybody's after the amber room, the eye-popping paneled chamber stripped from its suburban St. Petersburg palace by the Nazis in the fading days of the Reich. Not the most practical living space, you understand, but unique, having been crafted from micro-thin layers of the best Baltic amber by the best Baltic craftsmen. Passed from autocrat to autocrat, Hitler wanted it. GÖring wanted it. The Allies nearly bombed it. And Karol Borya, a kindly Ukrainian concentration camp survivor, father of that hotheaded judge in Atlanta, is one of the only people in the world with a clue as to where the pretty but dismantled and disappeared room may be, having been witness to the torture of its last known possessors. Alas for old men with old secrets in thrillers, there's always a pretty assassin waiting in the kitchen to pump you for your knowledge. Here, the villainess is sexy Suzanne Danzer, beloved employee of Czech billionaire, Nazi industrialist, and Soviet collaborator Ernst Loring, member of an ultra-exclusive clutch of stupendously wealthy gents who specialize in collecting stolen masterpieces. And while Suzanne is at Borya's backdoor, Christian Knoll, yet another employee of yet another supercollector is at the front. They both want to pick his brain in the most unpleasant way, hoping to pin down the whereabouts of that Tsarist treasure. Pumped serially for his secrets by the evil duo, poor old Karol gets heaved downstairs to his death, a demise that will drag his daughter Rachel and ex-son-in-law Paul from the comforts of metropolitan Atlanta to the corrupt corners of Middle Europe. Stilettos fly and silenced bullets plunk, but the plucky legal team, reunited by their special mission, dodge death and poke their noses into darkened churches, spooky tunnels, secret passageways and hidden rooms. Will they live to see their beloved children? Or that rock-lined room? Is the Pope Catholic? Copyright ©Kirkus Reviews, used with permission.