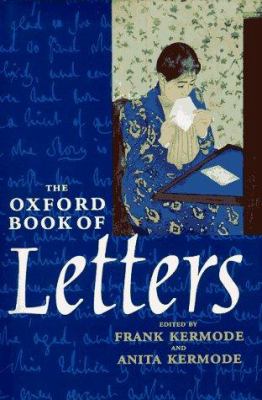 The Oxford book of letters / edited by Frank Kermode and Anita Kermode.

Reading other people's letters, like reading private diaries, offers thrilling and unexpected glimpses into the lives of others--their pledges of love and their sharp remonstrances, their thoughts on war and peace and the gossip of the day, their intellectual travels and idle chatter. It is partly this guilty pleasure we take in such literary eavesdropping that makes The Oxford Book of Letters so compelling. More than 300 letters spanning five centuries chronicle the affairs of correspondents from Elizabeth I to Groucho Marx, from politicans to poets, from the famous to the unknown.
Editors Frank Kermode and Anita Kermode have chosen a remarkable selection of correspondents both educated and barely literate, with styles that range from polished and witty to stumbling and artless, but who all share a gift for letters that display an immediacy and intimacy not shared by any other form of writing. Here is John Adams to his wife, Abigail, in what we know to be a harried April of 1776 ("You justly complain of my short Letters, but the critical State of Things and the Multiplicity of Avocations must plead my Excuse--"); Benjamin Disraeli, confiding to Lady Bradford the secret of his purchase of the Suez Canal for England ("not one of the least events of our generation"); Charles Dickens to his son, Henry, regarding finances ("You know how hard I work for what I get, and I think you know that I never had money help from any human creature after I was a child"); Flannery O'Connor to Cecil Dawkins, a young college instructor, with writing advice ("You can't be creative in all directions at once. Freshman English would suit me fine. I'd make them diagram sentences"); and an indignant A.T. Harris to the head of the Atlantic City Railroad in 1896 ("On the 15th yore trane that was going to Atlanta ran over mi bull...yore ruddy trane took a peece of hyde outer his belly between his nable and his poker at least fute square"). Among the most moving letters are those from emigrants to America, Australia, and South Africa, describing the hardships they endured and the resolution with which they faced their new worlds--we read Anna Francis's letter to her sister, detailing her dashed hopes for happiness as an emigre in South Africa ("And is this the place in which I am to live out the remainder of my wretched existence! Forbid it heaven!"); and Rebecca Butterworth's forlorn letter to England from Arkansas, outlining a litany of disaster: stillborn children, poor crops, dire illness ("If we sell soon and the Lord spares us, we will be out in fall").
With subjects ranging from the mundane to the extraordinary, from the tragic to the hilarious, the Kermodes have included both isolated missives as well as exchanges of letters between regular correspondents, where familiarity and an ongoing saga add to the fascination. The editors provide a context for the letters, and unobtrusive notes. In an age where communication is instant and ephemeral, this volume celebrates the glory of the written word, and what may well be a dying art form.

A vast compilation, this volume includes more than 300 letters that document the concerns of writers, political leaders, and ordinary citizens over the period 1535-1985. Each letter is accompanied by an explanatory note identifying the writer and establishing the context. The correspondents, some more skilled than others, pursue a range of topics, including an account of a public execution, gossip about friends and relatives, and the hardships of moving to a new land in search of a better life. One of the most moving letters, by Mary Shelley, recounts the events surrounding the death of her husband in a sailing accident and her intense feelings of loss. Most important, though, is the spontaneity and intimacy of this literary form and the glimpses it gives us of the writers' lives and thoughts. In a world dominated by instant communication, these letters are a sad reminder of a rapidly dying art. Recommended for undergraduate libraries.-Nancy R. Ives, SUNY at Geneseo (c) Copyright 2010. Library Journals LLC, a wholly owned subsidiary of Media Source, Inc. No redistribution permitted.

The husband-and-wife editors (he is a former professor of English literature at Cambridge and editor of The Oxford Anthology of English Literature; she is a retired professor of English who has taught at various U.S. and British universities), have compiled a wonderful collection of some 300 letters written by Britons and Americans from 1535 to 1985. According to the Kermodes, the golden age of letter writing was from 1700 to 1918, and they therefore emphasize this period in their collection. There are selections from many well-known personages such as philosopher Edmund Burke, feminist Mary Wollstonecraft and writers Samuel Johnson, Charles Dickens and Henry James, as well as selections from a number of lesser-known immigrants to Australia and South Africa who vividly describe their experiences. Included is a heartrending account of the death of the poet Shelley in a letter written by Mary Shelley to a friend. The majority of letters are from the writers' private correspondence and testify to the importance of letters in maintaining love affairs, friendships and family ties. An interesting and important record of a dying art. (Aug.) (c) Copyright PWxyz, LLC. All rights reserved

Letters written by writers and other famous people intrigue us. We hope to get a glimpse of their more private and spontaneous selves yet also expect that there will be no loss of originality when it comes to expressiveness, insight, drama, or humor. The enthusiastic, erudite editors of this eclectic volume have studied 500 years worth of epistolary output by British nobility and British and American writers and chosen 300 examples. Although specific letters will strike a reader's fancy, what's most remarkable about this collection is how it chronicles not only radical social and cultural changes, but also truly remarkable permutations in diction, vocabulary, and grammar. A random sampling of correspondents confirms the high caliber of this collection: Jonathan Swift, Horace Walpole, Samuel Johnson, Mary Wollenstonecraft Shelley, John Keats, Benjamin Disraeli, Charlotte Bronte{{‰}}, Charles Dickens, John Ruskin, George Eliot, Abraham Lincoln, Emily Dickinson, Henry James, D. H. Lawrence, George Bernard Shaw, Edmund Wilson, Virginia Woolf, and Elizabeth Bishop. (Reviewed July 1995)0192141880Donna Seaman
More book reviews at iDreamBooks.com