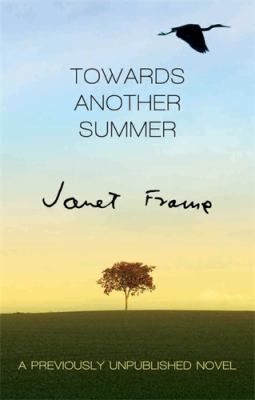 Towards another summer / Janet Frame.

'The Southern Cross cuts through my heart instead of through the sky.' A weekend away from home. But where is home? Is it London? Or New Zealand? Grace Cleave, expatriate novelist living in London, is holidaying in the north of England. Her host asks why she has abandoned her homeland: 'Don't you ever want to go back?' 'I was a certified lunatic in New Zealand. Go back? I was advised to sell hats for my salvation.' In this previously unpublished novel, Janet Frame explores themes of travel and return, homesickness and belonging. Grace is a migratory bird, longing for her own place in the world, if she can only decide where it is. She is struggling to establish her identity as a writer, but first she must learn to be comfortable in her own skin (feathers and all). Written in 1963, this work is an exquisitely composed precursor to An Angel at My Table, the autobiography Janet Frame wrote 20 years later (inspiring Jane Campion's memorable film adaptation). Frame rejected the pressure to publish TOWARDS ANOTHER SUMMER in her lifetime, because she claimed the story was 'embarrassingly personal'.And indeed she does turn her unflinching eye on herself, foibles and all; often enough the joke is at her own expense.

New Zealander Grace Cleave is a writer living in London. Single, 30, and introverted, she copes dreamily with the outside world, her grasp of reality tenuous at best. When she accepts an invitation to spend the weekend with an acquaintance, Philip, and his wife, Anne, she is hoping that the trip will be good for both her and her stalled novel. But from the outset, she is plagued by regrets, fears, terrible self-consciousness, and the conviction that she has turned into a migratory bird. Each step of the painful weekend-the uncomfortable train ride, the awful surprise that Philip has children, the anxiety about when to go to bed, when to awaken, and what to say in the meantime-triggers childhood memories of New Zealand and the many "shifts" her family made for her father's railroad job. Past and present, self and other, animal and human-all become a poetic tangle in Grace's mind. Frame (An Angel at My Table) wrote this novel in 1963. Now, published five years after her death, this work holds up perfectly, speaking to anyone who has ever felt isolated and different.-Joy Humphrey, Pepperdine Univ. Law Lib., Malibu, CA (c) Copyright 2010. Library Journals LLC, a wholly owned subsidiary of Media Source, Inc. No redistribution permitted.

New Zealand writer Janet Frame (1924-2004) will stand as one of the most sensitive, forthright, and adventurous illuminators of human consciousness. The author of many celebrated novels, stories, and a three-volume autobiography, Frame survived a turbulent and tragic childhood, mental illness, and nearly disastrous medical treatment to reap numerous awards. The cost of literary success is the subject of this 1963 novel, appearing for the first time in the U.S., about a writer, Grace Cleave, who has left sunny, lush New Zealand for sooty, crushing London. Grace accepts an invitation to spend a weekend with a kind journalist and his family in the country, then fails miserably to overcome her debilitating self-consciousness. Equally flummoxed by the snowy landscape and the warmth of Philip's household, she turns incoherent and retreats into all-consuming memories of her childhood. So revealing is this moody, metaphysical, and rhapsodic novel, Frame set it aside. Wisely rescued and posthumously published, this exquisite portrait of a mind under pressure will revitalize appreciation for a poetic master stylist, sharp wit, deep thinker, and consummate artist.--Seaman, Donna Copyright 2009 Booklist
More book reviews at iDreamBooks.com