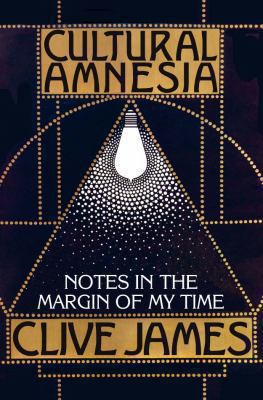 Cultural amnesia : notes in the margin of my time / Clive James.

Containing over 100 original essays, organised by quotations from A to Z, 'Cultural Amnesia' illuminates, rescues, or occasionally destroys the careers of many of the greatest thinkers, humanists, musicians, artists, and philosophers of the 20th century.

"Nearly forty years in the making, Cultural Amnesia is the work of a lifetime. It is both an enlightening and a despairing work, written by one of the world's most renowned critics. Cultural Amnesia can be viewed simply as an extraordinary encyclopedia, containing over one hundred essays, all of them never before published, and arranged from A to Z around celebrities, intellectuals, tyrants, and writers, whose apothegms have fascinated James throughout his adult life. The reader can plunge in and read from beginning to end or simply decide to browse, and choose to read a piece at night before bed, or in the library, or alone in a cafe, which is where James always hoped these reflections might first be imbibed." "On a more profound level, Cultural Amnesia functions far beyond any mere reference guide. Indeed, every one of its many essays was written especially to fit with all the others in a vast verbal mosaic of the mental life of modern times, the area where politics and culture meet. James illuminates, rescues, or occasionally demolishes the careers of many of the greatest thinkers, humanists, musicians, artists, and philosophers of the twentieth century. And in quoting them he shows why they should be remembered and why cultural amnesia is a continuing danger."--BOOK JACKET.

Philip Hodgins Memorial Medal winner James, who has published numerous books of criticism, autobiography, and poetry, presents his life's work in this resource guide covering what the author has learned as well as what he has failed to learn in his decades of writing about history and the arts. In more than 107 original essays organized by quotations from A to Z, James discusses some of the great thinkers, artists, humanists, and politicians who have shaped the 20th century, e.g., talk-show host Dick Cavett, psychoanalyst Sigmund Freud, jazz musician Louis Armstrong, and novelist F. Scott Fitzgerald. Preceding each essay is a brief biography of the luminary. Throughout, James states that we need a universal humanism and questions how to get it. His finely written, valuable, and comprehensive almanac, illustrated with 110 photographs, is highly recommended for public and academic libraries.-Susan McClellan, Avalon P.L., Pittsburgh (c) Copyright 2010. Library Journals LLC, a wholly owned subsidiary of Media Source, Inc. No redistribution permitted.

From Anna Akhmatova to Stefan Zweig, Tacitus to Margaret Thatcher, this scintillating compendium of 110 new biographical essays plumbs the responsibilities of artists, intellectuals and political leaders. British critic James (Visions Before Midnight) structures each entry as a brief life sketch followed by quotations that spark an appreciation, a condemnation or a tangent (a piece on filmmaker Terry Gilliam veers into a discussion of torturers' pleasure in their work). Sometimes, as in his salute to Tony Curtis's acting or his savage assault on bebop legend John Coltrane's penchant for "subjecting some helpless standard to ritual murder," James's purpose is just bravura opinionating. But most articles are linked by a defense of liberal humanism against totalitarianisms of the left and right-and ideologues who champion them. He lionizes prewar Vienna's martyred Jewish cafe intellectuals; castigates French apologists for communism-especially Sartre, who "could sound as if he was talking about everything while saying nothing"; and chides Borges for not noticing Argentina's descent into fascism. This theme can grow intrusive; even in an entry on children's author Beatrix Potter, he feels called upon to denounce Soviet children's books. But James's brilliantly aphoristic prose, full of aesthetic insights but careful not to let aesthetics obscure morality, makes for a delightful browse suffused with a potent message. Photos. (Mar.) (c) Copyright PWxyz, LLC. All rights reserved

As of This Writing (2003) showcased the range and brilliance of James' criticism. In this towering volume, the fruit of 40 years of passionate involvement, James proves to be a consummate writer of biographical essays. Motivated by concern that we are losing track of the great thinkers and creators of the last century and forgetting the true nature of humanism, the force that makes civilization civilized, James explicates the accomplishments of more than 100 seminal artists, writers, composers, and philosophers. The dream capital of James' republic of culture is Vienna during the heyday of cafe society, and his guiding light is the Viennese polymath Egon Friedell (1878-1938). James' remembrance of his hero is at once electrifying and profoundly moving, and so it is throughout this magnificent, soulful, and unpredictable assemblage. Where else might a reader come upon side-by-side considerations of Albert Camus and Dick Cavett? Coco Chanel and Charlie Chaplin? James also writes incisively and entertainingly of Miles Davis, Erik Satie, and Beatrix Potter. His knowledge is encompassing, his interpretations provocative. James not only preserves culture and nurtures humanism but also revitalizes the beauty and power of the English language. --Donna Seaman Copyright 2007 Booklist

The humanities are everywhere, but humanism is at a premium. So observes British writer and television personality James (As of This Writing, 2003, etc.) in this collection, mixing amateurish delight and scholarly immersion in books and ideas. It is an uncomfortable fact that a Nazi concentration-camp commander could murder the day away and then, on returning home, weep at a Brahms recording. A mere liking for books, art and music doesn't make a person good; even Adolf Hitler thought of himself as a humanist, though, James writes, "his connection with the civilized traditions was parodic at best and neurotic always." James adds elsewhere that the connection was more genuine than Stalin's and Mao's, if bested by Hitler's comrade Goebbels, who kept a massive library and even read the books in it. Most of James's subjects in this sprawling, sometimes impressionistic gathering of appreciations are the real deal, though. One is the largely forgotten Viennese cabaret performer Egon Friedell, who wrote a strange and centrifugal book and then committed suicide when German troops marched into Austria. Other of James's quite diverse heroes include Albert Camus, Stefan Zweig, Ernst Robert Curtius, G.K. Chesterton, Evelyn Waugh and Dick Cavett, figures who run the range of European humanism, British traditionalism and, well, Nebraskan autodidacticism. James is keen on exploring influences; his essay on Jorge Luis Borges, for instance, draws in the Romanian philosopher E.M. Cioran, who admired Borges's "world citizenship" and refusal to belong to any club that would have him as a member. (Cioran's affiliations included the fascist Iron Guard.) James inclines to conservatism, but definitely not reaction; he admires thinkers such as the anticommunist stalwart Jean-Fran‡ois Revel, who "has a lively appreciation of how people can get stuck with a view because it has become their identity," and he urges the view, quite humane, that humanism is closely bound up with ideals of freedom. Exemplary cogitations without a trace of jargon or better-read-than-thou condescension. Copyright ©Kirkus Reviews, used with permission.
More book reviews at iDreamBooks.com