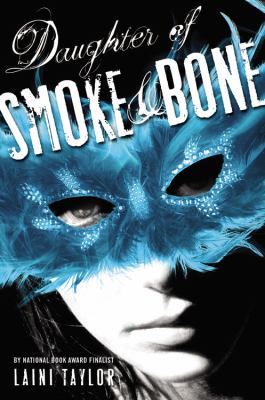 Daughter of smoke and bone / by Laini Taylor.

| Czech Republic -- Fiction | Prague (Czech Republic) -- Teen fictionGenre/Form: General fiction. | Fantasy fiction. | Teen fiction.DDC classification: Summary: Seventeen-year-old Karou, a lovely, enigmatic art student in a Prague boarding school, carries a sketchbook of hideous, frightening monsters--the chimaerae who form the only family she has ever known.
Tags from this library: No tags from this library for this title. Log in to add tags.
Fiction notes: Click to open in new window

Around the world, black handprints are appearing on doorways, scorched there by winged strangers who have crept through a slit in the sky.

In a dark and dusty shop, a devil's supply of human teeth grown dangerously low.

And in the tangled lanes of Prague, a young art student is about to be caught up in a brutal otherworldly war.

Meet Karou. She fills her sketchbooks with monsters that may or may not be real; she's prone to disappearing on mysterious "errands"; she speaks many languages--not all of them human; and her bright blue hair actually grows out of her head that color. Who is she? That is the question that haunts her, and she's about to find out.

When one of the strangers--beautiful, haunted Akiva--fixes his fire-colored eyes on her in an alley in Marrakesh, the result is blood and starlight, secrets unveiled, and a star-crossed love whose roots drink deep of a violent past. But will Karou live to regret learning the truth about herself?

Seventeen-year-old Karou, a lovely, enigmatic art student in a Prague boarding school, carries a sketchbook of hideous, frightening monsters--the chimaerae who form the only family she has ever known.

Followed by a sequel: "Days of Blood and Starlight".

National Book Award finalist Taylor (Lips Touch: Three Times) again weaves a masterful mix of reality and fantasy with cross-genre appeal. Exquisitely written and beautifully paced, the tale is set in ghostly, romantic Prague, where 17-year-old Karou is an art student-except when she is called "home" to do errands for the family of loving, albeit inhuman, creatures who raised her. Mysterious as Karou seems to her friends, her life is equally mysterious to her: How did she come to live with chimaera? Why does paternal Brimstone eternally require teeth-especially human ones? And why is she "plagued by the notion that she wasn't whole.... a sensation akin to having forgotten something?" Taylor interlaces cleverly droll depictions of contemporary teenage life with equally believable portrayals of terrifying otherworldly beings. When black handprints begin appearing on doorways throughout the world, Karou is swept into the ancient deadly rivalry between devils and angels and gradually, painfully, acquires her longed-for self-knowledge. The book's final pages seemingly establish the triumph of true love-until a horrifying revelation sets the stage for a second book. Ages 15-up. (Sept.) (c) Copyright PWxyz, LLC. All rights reserved.

Gr 9 Up-Blue-haired Karou is 17, and, in addition to her unusual tresses, has other intriguing aspects to her personality. She supports her life as an art student in Prague by running errands for her foster parent, a supernatural chimera named Brimstone. These errands, which take Karou through strange portals to strange places to meet with even stranger individuals, reap rewards not only of money, but also wishes. Taylor builds a thoroughly tangible fantasy world wherein a complex parallel universe competes with far-flung geographic locales for gorgeously evoked images. Karou herself is a well-rendered character with convincing motivations: artistic and secretive, she longs for emotional connection and a sense of completeness. Her good friend Zuzana goes some way toward mitigating Karou's solitude, but a sour breakup with beautiful bad boy Kaz has left her feeling somewhat bereft. Taylor leads readers from this deceptively familiar trope into a turbulent battle between supernatural species: angel-beings seek the destruction of demonlike chimera in revenge for the burning of the archive of the seraph magi. The more Karou discovers about the battle, however, the less simple good and evil appear; the angels are not divine, the chimera are not evil, and genocide is apparently acceptable to both sides in this otherworldly war. Initially, the weakest part of the story appears to be the love story between Karou and Akiva, an angel of "shocking beauty"; there is little to support their instant bond until their true connection is disclosed. The suspense builds inexorably, and the philosophical as well as physical battles will hold action-oriented readers. The unfolding of character, place, and plot is smoothly intricate, and the conclusion is a beckoning door to the next volume.-Janice M. Del Negro, GSLIS Dominican University, River Forest, IL (c) Copyright 2011. Library Journals LLC, a wholly owned subsidiary of Media Source, Inc. No redistribution permitted.

Seventeen-year-old Karou moves deftly between her relatively normal high-school life in Prague and the strange world of the chimaera, in which she collects the human and animal teeth that the wishmonger, Brimstone, painstakingly sorts. The chimaera are the only family Karou has known, and when access to their world suddenly disappears behind smoldering black handprints, she vows to find them. Could this have been a result of the perpetual war between the chimaera and the seraphim? Along with this central mystery of monsters, a fantastical Romeo-and-Juliet romance develops between Karou and the angel Akiva, a romance destined for hurt and betrayal. Author Taylor has created a variety of worlds, time frames, and creatures with such detail and craft that all are believable. Blurring the boundaries of good and evil, slaves and owners, human and beast, she careens readers from sadness to love, from the predictable to the amazing, and from the outlandish to the bizarre. Readers will look forward to the suggested sequel to this complex, exciting tale.--Bradburn, France. Copyright 2010 Booklist

Lush description of a gothic and ghostly Prague beckons readers from the first page and fulfills its promise, leading to a star-crossed romance that spans worlds and transcends death. Except for brilliant blue hair and an air of secrecy, art-student Karou is a seemingly normal teenager, nursing the hurt from a recent breakup over bowls of goulash with her best friend, Zuzana. No one, including Zuzana, knows that the strange, fascinating creatures from Karou's sketchbook are in fact her family. The chimaera, part human and part animal, exist behind a magic door leading to Brimstone's wish shop, where Karou was raised in a place she knows only as "Elsewhere." The characters, oth human and otherwise, are fully fleshed. Trained in martial arts and gifted with a new language for each birthday, Karou runs errands for the horned and clawed Brimstone, trading with murderers all over the world for the gory teeth he requires, but never knowing what they're for. In a Marrakesh marketplace, Karou meets a gorgeous angel with wings of fire; the two are drawn together by a powerful force. Desperate for answers, Karou begins a dangerous search and discovers a parallel, war-torn world that is the key to her true identity. Taylor builds a fantasy realm with mythic creatures, human desires, and battles of biblical scale; an inventive magic power is credibly balanced by the pain it requires. Taut plotting moves Karou's quest briskly along while developing deeper mysteries. The climactic revelations connect many strands, leaving the reader both satisfied and eagerly anticipating a forthcoming sequel. lauren adams (c) Copyright 2011. The Horn Book, Inc., a wholly owned subsidiary of Media Source, Inc. No redistribution permitted.

A love thought lost proves anything but when another world's 1,000-year war spills over into this one.Seventeen-year-old Karou leads a double life: as an art student in Prague with normal boyfriend troublesand as a runner of bizarre errands for Brimstone, a scarred and saturnine sorcerer with the head of a ram and the lower body of a dragon. With similarly chimerical associates, he has raised her from infancy and dispatches her through magic portals to destinations all over the world. She knows nothing of her past or purposeuntil a sudden, fiery closure of all the portals cuts her off from the only family she's ever known, and an initially violent but ultimately "sweet and beckoning collision" with winged, inhumanly beautiful Akiva leads to revelations of an ancient conflict between Seraphim and the supposedly bestial Chimaera. Switching points of view and settings, Taylor then fills in a back story that links Akiva and Karou in an older tragedy, while planting seeds that might lead ultimately to peace. The plot hinges on major contrivances, but along with writing in such heightened language that even casual banter often comes off as wildly funny, the author crafts a fierce heroine with bright-blue hair, tattoos, martial skills, a growing attachment to a preternaturally hunky but not entirely sane warrior and, in episodes to come, an army of killer angels to confront.Rarelyperhaps not since the author's own Faeries of Dreamdark: Blackbringer (2007)does a series kick off so deliciously. (Fantasy. 13-16)]] Copyright Kirkus Reviews, used with permission.
More book reviews at iDreamBooks.com