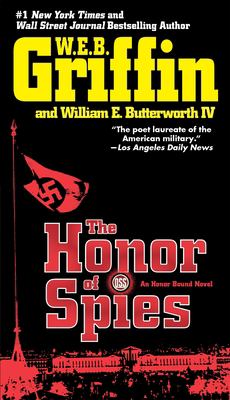 DDC classification: Summary: Assigned to help a German lieutenant colonel to escape from a prisoner-of-war detention center, World War II OSS officer Cletus Frade learns of the colonel's role in a conspiracy to assassinate Adolf Hitler and must outmaneuver a plot to kill the man's Nazi-connected parents.
Tags from this library: No tags from this library for this title. Log in to add tags.
Fiction notes: Click to open in new window
Total holds: 0

August, 1943: In his short time as a spy with the Office of Strategic Services, young Cletus Frade has faced many unlikely situations, but nothing like his new assignment. Having helped Lieutenant Colonel Wilhelm Frogger escape a Mississippi P.O.W. camp, he must now get the defiant German to turn against his country.

Assigned to help a German lieutenant colonel to escape from a prisoner-of-war detention center, World War II OSS officer Cletus Frade learns of the colonel's role in a conspiracy to assassinate Adolf Hitler and must outmaneuver a plot to kill the man's Nazi-connected parents.

World War II truly encompassed the globe, including Argentina, a military and political backwater. Father-and-son authors Griffin ("The Brotherhood of War" series) and Butterworth have a special affection for the country and have used it as the basis for a number of novels, including this latest collaboration. As always, there are betrayals, plots, and Byzantine relationships as the United States works hard to keep Argentina out of Nazi control, even if it means supporting such despicable characters as Juan PerUn. Alongside a horde of other characters from previous books in the "Honor Bound" series, Cletus Frade, half Argentine, half American, and impossibly young for the responsibilities given him, works with the OSS to stop the Nazis. Verdict Focusing on Argentina may be too parochial to interest general readers. Worse, the authors continue their habit of writing lengthy explanations of who was who from previous books, all of which detracts from the plot and renders the book tedious and confusing. Only die-hard fans of the series will enjoy. [See Prepub Alert, LJ 9/1/09.]-Robert Conroy, Warren, MI (c) Copyright 2010. Library Journals LLC, a wholly owned subsidiary of Media Source, Inc. No redistribution permitted.

Set in 1943, the tedious fifth entry in bestseller Griffin's sprawling Honor Bound series, coauthored with son Butterworth, picks up where Death and Honor (2008) left off, with Don Cletus Frade, a U.S. Marine Corps major, still trying to expose two Nazi secret missions: Operation Phoenix, which concerns large sums of money being smuggled into Argentina to be used by high-ranking Nazis who plan to flee the Reich if Germany loses the war, and another program that ransoms rich Jews out of Germany. Most of the many characters continue to scheme against one another and endlessly discuss their plots, coups, and assassination attempts. Brief, violent altercations occasionally interrupt the talk. As usual, the plot abruptly stops, presumably scheduled to resume in the next installment. Newcomers are advised to start with the first of the series. Those who prefer action in their WWII fiction should go elsewhere. (Jan.) (c) Copyright PWxyz, LLC. All rights reserved

The Honor Bound series, set during World War II, rolls steadily along. In this installment, OSS officer Cletus Frade has a tricky assignment: to help a German lieutenant escape a Mississippi internment camp so that Frade can use the man to make sure a German plot to assassinate Hitler succeeds. Frade also wants to find out what the man's parents are up to in South America, where, rumor has it, the Germans are preparing for the arrival of senior Nazi officials, who will live there after the war. This is an extremely complex novel, with a large cast and, unfortunately, a lot of clutter, especially in the opening scenes. The story takes quite a while to get moving, and when it finally does, it's frequently interrupted by lengthy chunks of expository dialogue. Still, the authors' many fans will likely embrace the novel with open arms (even if casual readers may be a little less forgiving).--Pitt, David Copyright 2010 Booklist
More book reviews at iDreamBooks.com