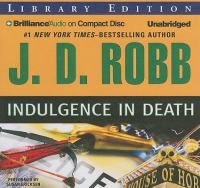 When a murder disrupts the Irish vacation she is taking with her husband, Roarke, Eve realizes that no place is safe--not an Irish wood or the streets of the manic city she calls home. But nothing prepares her for what she discovers upon her return to the cop shop in New York City.... A driver for a top-of-the-line limousine service is found dead--shot through the neck with a crossbow. The car was booked by an executive at a venerable security company whose identity had been stolen. Days later, a stunning, high-priced escort is found killed at Coney Island, a bayonet stuck in her heart. And again, the trail leads to a CEO whose information has been hijacked. With a method established, but no motive to be found, Eve begins to fear that she has come across that most dangerous of criminals, a thrill killer, but one with a taste for the finer things in life--and death. Eve does not know where or when the next kill will be, or that her investigation will take her to the rarefied circle that Roarke travels in--and into the perverted heart of madness....

Random hits, thrill kills, and murderers with a taste for the finer things in life are making NYPSD Lieutenant Eve Dallas angry. And an angry Eve can be just as efficient and dangerous a predator as the killer. As time runs out on another innocent victim's life, Eve's investigation will take her into the rarified circle that her husband, Roarke, travels into the perverted heart of madness.

Lt. Eve Dallas of the New York Police and Security Department returns home from a long overdue Irish vacation to a string of bizarre murders in Robb's thrilling 32nd future cop novel (after Fantasy in Death). The crossbow killing of chauffeur Jamal Houston in his limo in a La Guardia parking lot is followed by the death of high-rent prostitute Ava Crampton, found at Coney Island's House of Horrors stabbed with a bayonet. Other victims include Luc Delaflote, a celebrity chef who's harpooned, and Adrianne Jonas, "a facilitator for the rich" strangled with a handmade bullwhip. Eve, assisted by her trustworthy sidekicks, Det. Delia Peabody and husband Roarke, uncovers a wicked game that grows increasingly macabre. Robb (the pseudonym of Nora Roberts) keeps the reader squirming as Eve and company try to avoid dying in weird ways themselves. (Nov.) (c) Copyright PWxyz, LLC. All rights reserved.

NYPD lieutenant Eve Dallas might have been on holiday, but as she knows all too well, murder never takes a vacation. No sooner does Eve return from Ireland with her husband, Roarke, than she is back on the job looking into the death of a limousine driver who has been shot with a crossbow. The very next day, a high-priced licensed companion is stabbed to death in an amusement park horror house. The only connection between the two killings is the choice of weapons: the second involved an antique bayonet. As Eve and her team scramble to find more clues, Eve begins to think she is on the track of a thrill killer. When it comes to finding a killer, the smart money is always on Eve Dallas. The latest addictive addition to Robb's long-running series features spiky humor; a cleverly constructed, adrenaline-raising plot; and the requisite amount of sexy passion between Eve and her soulmate, Roarke.--Charles, John Copyright 2010 Booklist

Thrill killing 50 years in the future.Upon her return from vacation, Lt. Eve Dallas (Fantasy in Death, 2010, etc.) catches a particularly grisly homicide. A limo driver has been skewered to the steering wheel by a crossbow bolt. Almost immediately thereafter, a Licensed Companion (that's high-class hooker) has a bayonet thrust through her heart in a Coney Island horror ride. The murders that follow include one by harpoon and another by bullwhip. Each slaying is more daring, more public, than the last. And investigation proves that all the victims were lured to their deaths by appointments set up using bogus identities. With some assistance from her mega-rich husband Roarke, Dallas zeroes in on two suspects, Sylvester Moriarity and Winston Dudley, who both have money, privilege, power and apparently a competitiveness that has driven them to create a murder game in which they alternate kills, each determined to be more outlandish than the other. Fueled by many cups of coffee and several lovemaking interludes with Roarke, Dallas sets up an endgame with herself as bait.Robb, the futuristic alter ego of Nora Roberts, has churned out more than 35 titles in the In Death series. Here there's asprinkling of droids, techie hardware and off-planet references, but mainly an old-fashioned love story interrupted by gore.]] Copyright Kirkus Reviews, used with permission.