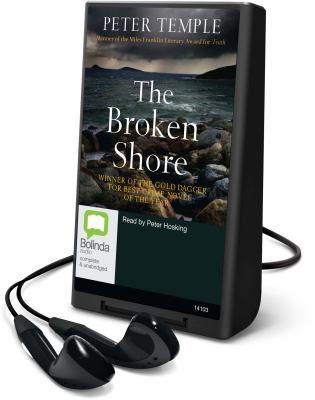 Genre/Form: Audiobooks. | Detective and mystery fiction.DDC classification: Read by Peter Hosking.Summary: PLAYAWAY: Shaken by a scrape with death, big-city detective Joe Cashin is posted away from the Homicide Squad to a quiet town on the South Australian coast where he grew up. Carrying physical scars and not a little guilt, he spends his time playing the country cop, walking his dogs, and thinking about how it all was before. When a prominent local is attacked and left for dead in his own home, Cashin is thrust into a murder investigation. The evidence points to three boys from the nearby Aboriginal community; whom everyone wants to blame. But Cashin is unconvinced, and soon begins to see the outlines of something far more terrible than a simple robbery gone wrong.
Tags from this library: No tags from this library for this title. Log in to add tags.

Joe Cashin was different once. He moved easily then; was surer and less thoughtful. But there are consequences when you've come so close to dying. For Cashin, they included a posting away from the world of Homicide to the quiet place on the coast where he grew up. Now all he has to do is play the country cop and walk the dogs. And sometimes think about how he was before. Then prominent local Charles Bourgoyne is bashed and left for dead. Everything seems to point to three boys from the nearby Aboriginal community; everyone seems to want it to. But Cashin is unconvinced. And as tragedy unfolds relentlessly into tragedy, he finds himself holding onto something that might be better let go...

One set of earphones and one AAA battery required for playback.

PLAYAWAY: Shaken by a scrape with death, big-city detective Joe Cashin is posted away from the Homicide Squad to a quiet town on the South Australian coast where he grew up. Carrying physical scars and not a little guilt, he spends his time playing the country cop, walking his dogs, and thinking about how it all was before. When a prominent local is attacked and left for dead in his own home, Cashin is thrust into a murder investigation. The evidence points to three boys from the nearby Aboriginal community; whom everyone wants to blame. But Cashin is unconvinced, and soon begins to see the outlines of something far more terrible than a simple robbery gone wrong.

Despite our common Anglo-Saxon heritage, Australian mysteries have never done well in this country. Perhaps they aren't exotic enough for readers who prefer their murders set in the chilly climes of Scandinavia or the sultry heat of Italy. But if this superb novel by one of Oz's finest crime writers breaks out here, pop open a can of Fosters beer and get ready for an Aussie crime wave. Melbourne homicide detective Joe Cashin, reassigned temporarily to his hometown on the south Australian coast after an incident that left him severely injured and a partner dead, is called to investigate the brutal attack on Charles Burgoyne, a prominent and wealthy local citizen. Suspicion soon falls on three Aboriginal teenagers; two are killed in a botched stakeout, and the third drowns himself in the Kettle, a jagged piece of coastline also known as the Broken Shore. Case closed, but Joe, who has Aboriginal cousins, probes further and uncovers far darker crimes. Temple's (Identity Theory) eighth novel deservedly won the Ned Kelly Award, Australia's highest crime fiction prize; in prose that is poetic in its lean spareness, though not without laconic humor (a character has the "clotting power of a lobster"), it offers a haunting portrait of racial and class conflicts, police corruption, and strained yet unbreakable family ties. A helpful glossary defines such colorful Down Under terms as "stickybeak." Highly recommended. [See Pre-pub Alert, LJ 2/15/07.]-Wilda Williams, Library Journal (c) Copyright 2010. Library Journals LLC, a wholly owned subsidiary of Media Source, Inc. No redistribution permitted.

In Temple's beautifully written eighth crime novel, Joe Cashin, a city homicide cop recovering from an injury, returns to the quiet coastal area of South Australia where he grew up. There he investigates the beating death of elderly millionaire Charles Bourgoyne. After three aboriginal teens try to sell Bourgoyne's missing watch, the cops ambush the boys, killing two. When the department closes the case, Joe, a melancholy, combative cynic sympathetic to underdogs, decides to find the truth on his own. His unauthorized inquiry, which takes him both back in time and sideways into a netherworld of child pornography and sexual abuse, leads to a shocking conclusion. Temple (An Iron Rose), who has won five Ned Kelly Awards, examines Australian political and social divisions underlying the deceptively simple murder case. Many characters, especially the police, exhibit the vicious racism that still pervades the country's white society. Byzantine plot twists and incisively drawn characters combine with stunning descriptions of the wild, lush, menacing Australian landscape to make this an unforgettable read. (June) (c) Copyright PWxyz, LLC. All rights reserved

Thanks largely to Hollywood, Americans tend to picture Australians as genial, sunburned rednecks who enjoy beer, barbecue, and bare-knuckle brawling. Without countering all of those stereotypes--the only touching Temple's men do is with their fists-- The Broken Shore offers a cold-weather vision of the continent that, despite its rural setting, is more Ian Rankin than Crocodile Dundee. Melbourne homicide detective Joe Cashin has been temporarily assigned to his hometown, dinky Port Monro. Rehabilitating (with aspirin and whiskey, mostly) from injuries only slowly explained, he broods over family history and mistakes made. But when a local eminence is assaulted--and an attempt to detain the suspect goes fatally wrong--Cashin finds that small-town crimes offer complications worthy of the big city. Though the dense slang will be unfamiliar to U.S. readers (a glossary is provided), what's striking is how easily South Australia anagrams to the American West. Substitute Indians for Aborigines, and land-use issues for land-use issues (Australia has lots of coastline, but waterfront property is waterfront property), and you have a familiarly troubling tale of race and class conflict--with an even darker crime at the heart of it all. Temple's novel racked up the awards in Australia, and it's easy to see why: this deeply intelligent thriller starts slowly, builds inexorably, and ends unforgettably. --Keir Graff Copyright 2007 Booklist

An Australian cop sent to the hinterlands after narrowly escaping death finds that life in the slow lane is just as nasty. Someone's bashed in the silvered head of Charles Bourgoyne, industrialist and philanthropist, and left him for dead. The evidence of Bourgoyne's pricey missing watch points to three aboriginal boys who tried to pawn a similar watch. But when Detective Sergeant Joe Cashin, head of Port Monro station, tries to bring them in, the pinch goes horribly wrong. Suddenly Cashin, a homicide cop whose partner was killed by a murderous drug dealer aiming for Cashin as well, is treading on eggshells. His old schoolmate Bobby Walshe, a political activist leading a radical new party, serves notice that he intends to make hay of the debacle. Helen Castleman, another old schoolmate who's now an attorney defending one of the accused, rails against him and then, adding insult to injury, buys the place next door and starts a quarrel over the boundary between them. With every inducement to declare the case closed, Cashin finds himself reopening it instead. What he learns about Bourgoyne and a trail of other victims is devastating. Temple (Identity Theory, 2004, etc.) drops disclosure after grim disclosure into his tale as discreetly as if he were trying to keep each revelation secret, and the behavior of several suspects defies belief. The densely layered narrative is less a whodunit than a superior mood piece and psychological portrait. Copyright ©Kirkus Reviews, used with permission.
More book reviews at iDreamBooks.com