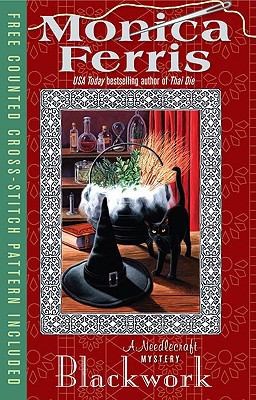 Genre/Form: Detective and mystery fiction.DDC classification: Summary: In the town of Excelsior, Minnesota, it's Halloween, and Betsy Devonshire, owner of the Crewel World needlework shop and part-time sleuth, is haunted by murder as she investigates the mysterious death of Wicca practitioner and microbrewery owner Leona Cunningham.
Tags from this library: No tags from this library for this title. Log in to add tags.
Fiction notes: Click to open in new window

It's Halloween, and Betsy Devonshire, owner of the Crewel World needlework shop and part-time sleuth, is haunted by murder, in the latest work in the bestselling Needlecraft series.

In the town of Excelsior, Minnesota, it's Halloween, and Betsy Devonshire, owner of the Crewel World needlework shop and part-time sleuth, is haunted by murder as she investigates the mysterious death of Wicca practitioner and microbrewery owner Leona Cunningham.

Ferris's spooky 13th needlecraft mystery (after 2008's Thai Die) finds Betsy Devonshire, owner of the Crewel World needlework shop, preparing for the upcoming Halloween festivities in Excelsior, Minn., along with a host of other locals, including Leona Cunningham, a Wiccan and senior partner in a microbrewery pub, who's mixing a new brew called "Don't Be Afraid of the Dark Ale." When Ryan McMurphy, an auto mechanic who's offered his restored antique fire truck for the parade, turns up dead in a friend's basement sewing room, Betsy once again puts on her sleuthing cap. Some of the stitchers, who serve as a sort of friendly Greek chorus, are into blackwork, an intricate reversible form of embroidery. Instructions for a blackwork pattern, "Witchwork," appear at the end. (Oct.) (c) Copyright PWxyz, LLC. All rights reserved

The thirteenth entry in Ferris' Needlecraft Mystery series is another winner. Betsy Devonshire is owner of the needle-craft shop Crewel World, and, typical of amateur sleuths in cozy mysteries, also spends plenty of time investigating murders. One of her friends in Excelsior, Minnesota, who is the owner of a local microbrewery and a practitioner of Wicca, is accused of murder when an alcoholic mysteriously dies after overimbibing. Betsy is convinced that the witch is innocent; there are many other suspects, but most of them are also friends. Along with the mystery, Ferris dispenses intriguing information about Wicca, beer making, and the style of needle craft known as blackwork. Not only are we treated to an original pattern, but we also get insight into how Betsy translates the design of needlework into a way of solving murder. As usual, there is some light romance and a good dose of humor, the latter prompted this time by Ferris' take on Halloween in a small town.--Coon, Judy Copyright 2009 Booklist

Murder interrupts the Halloween festivities at Excelsior, Minn. Leona Cunningham has two strikes against her: She owns a microbrewery and practices Wicca, the ancient religion many mistake for devil worship. When a local drunk who'd been banned from her establishment turns up dead of unknown causes, gossip blames Leona. It's up to sleuthing needlework-shop owner Betsy Devonshire (Thai Die, 2008, etc.) to find the killer. Before his untimely decease, alcoholic Ryan McMurphy had been slated to drive a restored fire truck in the Halloween parade. His wife had recently thrown him out, and he'd been staying in the basement sewing room of Shelly Donohue, whose live-in love Harvey Fogelman was his old friend. Although Leona suspected Ryan of trashing her porch, she was far from the only one with a reason to wish him dead. Ryan's drunken driving caused a severe injury to one of his friends. His cousin was furious that he ruined her daughter's chances to get into the Naval Academy. He was blackmailing Harvey. And his wife is now in line for a $2 million insurance payout. Even after her gay friend Godwin's near-fatal experience with dry ice gives Betsy the clue to the cause of death, she still needs to figure out who did the deed. Fans will enjoy the needlework lore, the included pattern and the ongoing adventures, pleasant if not exactly exciting, of Betsy, Godwin and their pals. Copyright Kirkus Reviews, used with permission.
More book reviews at iDreamBooks.com