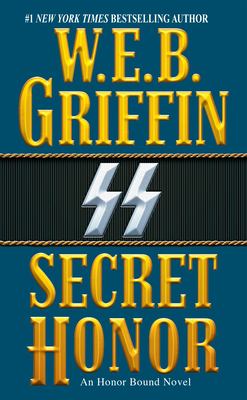 The crackling new novel in the bestselling Honor Bound series, by the master of the military thriller.<br> <br> As with his other enormously popular series, the first two novels in W. E .B. Griffin's saga of World War II espionage in Germany and Argentina - Honor Bound and Blood and Honor - became immediate bestsellers and were hailed as "immensely entertaining adventures" ( Kirkus Reviews ). Now, in Secret Honor , Griffin creates his most rousing novel yet.<br> In Wolf's Lair, a German general works toward the assassination of Adolf Hitler. In Buenos Aires, the general's son, code-named Galahad, falls under suspicion by the SS after a Nazi operation suddenly goes bad. In the middle of it all is OSS agent Cletus Frade, who knows the identity of father and son and what they will do next...if they can survive that long. For not only are SS and Abwehr officers hot on their trails in both countries, but the OSS has branded Frade a rogue agent and is determined to shake the truth from him, at whatever cost. If Frade can't figure a way to hold them all off, then the futures of all three men may be very short indeed....<br> Written with the special flair that Griffin's readers expect, filled with high drama and real heroes, Secret Honor is further proof, in Tom Clancy's words, that "Griffin is a storyteller in the grand tradition."

A German general plots to assassinate Hitler, the general's son is suspected of disloyalty, and the OSS agent following them both is in deep trouble with his own bosses. (c) Copyright 2010. Library Journals LLC, a wholly owned subsidiary of Media Source, Inc. No redistribution permitted.

This third entry in the military/espionage Honor Bound series, focusing on the Argentine-German connection during WWII, will intrigue newcomers and have Griffin's long-time fans queuing up for the next installment. In 1943, the Nazi-ordered assassination of Jorge Frade, the anti-Axis president of Argentina, has left the country in a tense mood, which is exacerbated by the murder of two Nazi officers during a night beach landing, part of the top-secret Nazi Operation Phoenix. The aborted mission was crucial to a plan to free the Argentine-interned crew of the Nazi ship Graf Spee, but it turns out that the slain officers had also extorted ransom money from Jews in concentration camps and arranged for their passage to Argentina--without the Reich's knowledge. Cletus Frade, the 24-year-old American-reared son of the slain president, has returned to Argentina as heir to his father's vast estates and financial holdings. But Cletus is also an OSS (CIA precursor) agent, and a chance meeting with Major Hans-Peter von Wachstein, a Nazi pilot attached to the German embassy, results in their friendship. Peter feeds secrets to Cletus in exchange for help in moving Peter's family's funds to Argentina, where they hope to live after the war that he and his father (a close aide to the Fuhrer) believe is wrong and already lost. When Himmler launches an investigation to find the embassy spy who scuttled Operation Phoenix, Cletus struggles to protect Peter's identity and deal with the rising power of pro-Axis Juan Peron. Griffin adroitly shifts among German, American and Argentinian cultural milieux and fills the plot with believable romance, intrigue and diplomatic fencing, while capturing the horrors of war and the crucial role of intelligence agents. He nicely explains the Reich's need for Argentina as safe harbor to replenish its U-boats and to stash funds for postwar Nazi emigration. What will happen to the SS, Cletus and the surviving cast promises an equally exciting sequel. (Jan.) (c) Copyright PWxyz, LLC. All rights reserved

Griffin's twenty-ninth novel, the third in his Honor Bound series, is a story of espionage during World War II. It concerns a German general who realizes that his country is losing the war, Hitler and his cohorts are evil, and the Allies will demand a terrible retribution upon their victory. He seeks to hasten the end of the war by the only possible means available--assassinating the Nazi leader. He warns his son, an officer stationed in Buenos Aires, not to return to Germany until the war is over. The general's son is suspected by the SS after a Nazi operation goes awry. Add to the mix one Cletus Frade, an OSS agent accused of disobeying orders and threatened with being returned to the U.S. and admitted to a mental hospital. Descriptions of the war's battles and its leaders, its aircraft and ships, are notable for their accuracy, which Griffin is known for. The dialogue is a bit stereotyped--the word jawohl appears on just about every other page--but the plot moves at a brisk pace, which his fans appreciate. This Book-of-the-Month Club alternate selection will undoubtedly reach the best-seller lists, for the author once again proves himself a compelling storyteller. --George Cohen

Griffin's third entry in a series begun with Honor Bound (1993) and Blood and Honor (1997), military thrillers that rang bells on the bestseller lists'as will Secret Honor. The first installment led with leatherneck fighter pilot Cletus Howell Frade being posted in the fall of 1942 to OSS undercover duty in neutral Argentina, where U-boats refueled in coastal waters. Argentina- born, Texas-resident, fluent-in-Spanish Cletus, heir to an oil fortune, returned in Blood and Honor to trip up Nazis without damaging diplomatic ties. These two previous titles were notable for their delicious descriptions of Argentine high society (including Clete's impending marriage to the pregnant Dorotea, a high-born senorita whose virginity he despoiled) and sensibly bolted-down melodrama. Secret Honor maintains this pleasing formula, in this case by turning on an attempt to assassinate Hitler. The German general who planned the failed coup and his son, code-named ``Galahad,'' however, are sniffed out by the SS and Abwehr in Germany and Argentina. Meanwhile, Clete himself, whose father was murdered by the Germans, is on the outs with OSS and must work under the rose. Griffin's strong eye for detail and rousing ability to keep real earth under his hero's heels give surprising lift to what otherwise might seem (like some early WWII movie set in Casablanca) dull stuff. After all, Cletus and Dorotea will always have Buenos Aires.
More book reviews at iDreamBooks.com