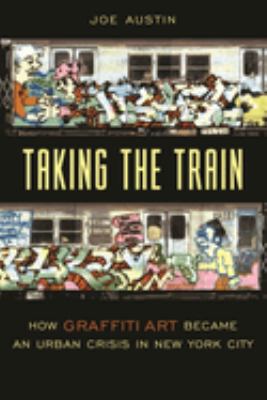 In the 1960s and early 1970s, young people in New York City radically altered the tradition of writing their initials on neighborhood walls. Influenced by the widespread use of famous names on billboards, in neon, in magazines, newspapers, and typographies from advertising and comics, city youth created a new form of expression built around elaborately designed names and initials displayed on public walls, vehicles, and subways. Critics called it "graffiti," but to the practitioners it was "writing."

Taking the Train traces the history of "writing" in New York City against the backdrop of the struggle that developed between the city and the writers. Austin tracks the ways in which "writing"-- a small, seemingly insignificant act of youthful rebellion--assumed crisis-level importance inside the bureaucracy and the public relations of New York City mayoral administrations and the Metropolitan Transportation Authority for almost two decades. Taking the Train reveals why a global city short on funds made "wiping out graffiti" an expensive priority while other needs went unfunded. Although the city eventually took back the trains, Austin eloquently shows how and why the culture of "writing" survived to become an international art movement and a vital part of hip-hop culture.

In this scholarly volume Austin, an assistant professor of popular culture at Bowling Green State University and coeditor of Generations of Youth, analyzes the social world of "writers" who spray-paint their names and other stylized markings on New York's public spaces. Austin adopts the perspective of those outside the power structure, using the graffiti artists' own writings, media accounts of the issue, and interviews to explore this topic. In this perspective, the graffiti writers' activities contribute not only to their own identity but also to the shared experience of city life. The writers collaborate to develop their art form and build their "fame" among other scribes. Their activities are in opposition to political and legal authorities who seek to protect private property and restrict freedom of expression. Although solidly academic, this book is enlivened by its fascinating topic. Recommended for academic collections emphasizing popular culture and urban anthropology. Paula R. Dempsey, DePaul Univ. Lib., Chicago (c) Copyright 2010. Library Journals LLC, a wholly owned subsidiary of Media Source, Inc. No redistribution permitted.

Denied the usual outlets for making a name for themselves, young men from urban communities turned in the 1960s and early '70s to large-scale graffiti projects on subway cars technically called "writing" to make their mark. "When you're poor, that's all you've got," claims Iz the Wiz, one of the graffiti artists presented by Austin, a Bowling Green University professor of popular culture. This provocative examination of urban graffiti culture's heyday suggests that "writing could have been promoted as a homegrown public art movement," but instead it was relegated, by authorities and much of the media, as vandalism. Arguing that "writing" functions as a "prestige economy," making the writer famous outside of his neighborhood, Austin examines in depth both its artistic and social meanings. From the function of networking between neighborhoods to the social difference between the Great Tradition style and the later invention of Throw Ups, Austin fills his broad canvas with such diverse issues as the history of juvenile delinquency in Manhattan; Robert Moses's legacy of urban development; how and why the New York Times changed its editorial position on graffiti; and the eventual relation of "writing" to zine and video culture. Austin's precise, witty and genial style perfectly meshes with his rigorous research and analysis. He makes the differences between emerging "bombers" and "piecers," or the social hierarchy that relegates "toy taggers" to the bottom rungs, seem vital and rife with cultural import. The Metropolitan Transit Authority's "retaking" of the trains in the mid-'80s is thus viewed as a mixed blessing at best. (Mar.) Forecast: This exemplary study makes important contributions to understanding contemporary art, urban sociology and the culture wars, yet reads like a trade book. Heightened New York interest should broaden its appeal; look for success from New York or art-based display tables. (c) Copyright PWxyz, LLC. All rights reserved

Austin, of Bowling Green State's Department of Popular Culture, begins his rigorous and clarifying assessment of New York graffiti art by declaring it "what is perhaps the most important art movement of the late twentieth century." He backs up this bold claim with a meticulous history that traces the evolution of graffiti art's mission and styles (from the "masterpiece" form to the more aggressive "throw-up") and chronicles its wildly mixed reception, which included the city launching an all-out war against graffiti while gallery owners offered top artists shows. Not only does Austin analyze the aesthetics of this "unique artistic hybrid with aspects of a comic book, an advertisement, and a mural painting," he also delineates the harsh economic and racially divisive social conditions from which it emerged, and parses the rhetoric with which it has been castigated. Ultimately, the often ironic story of graffiti art is a tale of lost opportunities for recognizing the tremendous energy and talent of young marginalized artists of color willing to take great risks to get their work seen. Donna Seaman
More book reviews at iDreamBooks.com