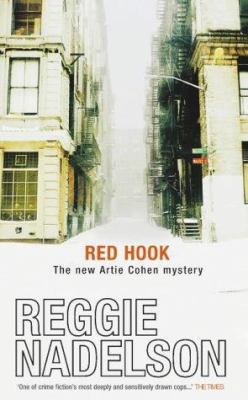 In the second of three Artie books, set on the New York waterfront, Artie Cohen pursues the murder of a reporter on the docks of Red Hook.<br> <br> Jack Santiago is famous for his investigative stories, for his ability to get under the skin of the rich and famous, and for his reporting on nuclear terrorism in New York. The city, he insists, is on the verge of an attack, an attack so sudden and secret that none of the preparations will make any difference. He is obsessed with suitcase nukes -- tiny weapons concealed in bags easily carried into the city -- and with the fact that 100,000 people will die of nuclear poisoning. One problem with Santiago is that he is found dead, on the night of the August 2003 blackout, when the lights go out up and down the east coast. The other problem is that he has made up the stories.<br> <br> On the day the lights go down, Artie Cohen, still regretting the loss of Lily Hanes who left him, marries Maxine Crabbe, a long-time friend who once saved his ass in Disturbed Earth. He wants a life, kids, a home; with Maxie, he's convinced himself he can find it.<br> <br> In the course of uncovering Santiago's killer, Artie also uncovers the ways in which information is regularly corrupted and turned into propaganda -- something he knows about from his childhood in the Soviet Union. And, there's something else -- a link between Santiago's former boss and Artie's neighbour, Ricky Tae, a black, gay man who is also eventually murdered. For Artie, the case is further complicated by Red Hook's coming development as the hot new New York neighbourhood, not to mention a complication in his own life; the return of Lily Hanes.

Nadelson's sixth Artie Cohen novel (after Disturbed Earth) opens as the 2004 Republican National Convention takes over New York City. About to go on his honeymoon, the newly married Artie is delayed by the murder of his friend, Sid McKay, who had thought he was being stalked but would not say what frightened him. While he obsesses over Sid's death, believing himself responsible because he did not do more to help his friend, Artie's new marriage goes down the tubes. Nadelson's sparse, staccato prose captures the rhythm of New York City in the same manner as William J. Caunitz and Michael Jahn. Nadelson is also the author of the recently published biography of Soviet rock idol Dean Reed, Comrade Rockstar, which has just been optioned by Tom Hanks. (c) Copyright 2010. Library Journals LLC, a wholly owned subsidiary of Media Source, Inc. No redistribution permitted.

Nadelson's strong sixth Artie Cohen whodunit (after 2005's The Disturbed Earth) depicts a grim and gritty post-9/11 New York City faced with new fears of terrorism aimed at disrupting the 2004 Republican National Convention. As Cohen, an NYPD detective who grew up in the Soviet Union, prepares to marry, he receives cryptic requests for help from an old friend, Sid McKay, a respected reporter who has become increasingly disillusioned with the corruption of the American news media. Cohen imperils his personal happiness by going the extra mile for McKay, delving into a complicated world of terrorism, the Russian underworld and real estate speculation. Tragically, Cohen's efforts can't prevent McKay's murder. The author continues to raise the stakes for her three-dimensional hero and shows every sign of having many more compelling stories to tell. (Oct.) (c) Copyright PWxyz, LLC. All rights reserved

Marriage brings little joy to Artie Cohen, NYPD. He packs his new bride off to New Jersey while he searches the Brooklyn waterfront for an old friend's killer. There's zero chemistry between Artie Cohen (Disturbed Earth, 2005, etc.)--who tortures himself daily over his old life in Russia, his Alzheimer's-stricken mother in Israel, his lost love Lily Hanes and the sadness he finds in people everywhere--and blandly cheerful Maxine Crabbe, who, undaunted by the loss of her fire-captain husband at the World Trade Center, longs to buy a condo in lower Manhattan. They spend little time together at the lavish wedding party mega-mogul Tolya Sverdloff throws them before Maxine leaves for the Jersey shore with twin daughters Millie and Maria. Promising to join them, Artie first slopes off to Red Hook to marvel at the gentrification of the old warehouses and look in on retired reporter Sid McKay, who sends him urgent messages, then refuses to elaborate before he's beaten to death. Artie puts Maxine off repeatedly while he chats with high-fliers at fancy clubs, prowls Brighton Beach to find the crazy Russian lady who sells tamales at soccer games, probes Tolya's deal to buy part of the old High Line and moons over Lily at their favorite Chinese bar, exposing the dark side of the human soul and the upside of downtown real estate while his inquiry lumbers on. Big Apple navel-gazing at its glummest. Copyright ©Kirkus Reviews, used with permission.
More book reviews at iDreamBooks.com