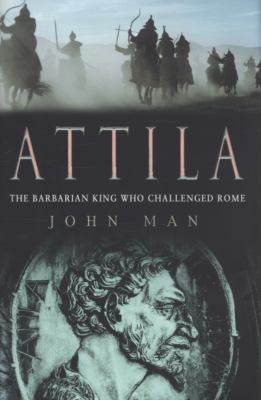 Attila the Hun is a household name---a byword for mindless barbarism. But to most of us the man himself, his world, and his significance are all unknown. In this stunning historical narrative, John Man reveals the real Attila.


For a crucial twenty years in the early fifth century, Attila held the fate of the Roman Empire and the future of all Europe in his hands. The decaying imperium, dominating the West from its twin capitals of Rome and Constantinople, was threatened by barbarian tribes from the East. It was Attila who created the greatest of barbarian forces. His empire briefly rivaled Romes, reaching from the Rhine to the Black Sea, the Baltic to the Balkans. In numerous raids and three major campaigns against the Roman Empire, he earned himself an instant and undying reputation for savagery.


But there was more to him than mere barbarism. Attilas power derived from his astonishing character. He was capricious, arrogant, and brutal---but also brilliant enough to win the loyalty of millions. Huns thought him semi divine, Goths and other barbarians adored him, educated Westerners were proud to serve him. Attila was also a canny politician. From his base in the Hungarian grasslands, he sent Latin and Greek secretaries to blackmail the Roman Empire. Like other despots, before and since, he relied on foreign financial backing and knew how to play upon the weaknesses of his friends and enemies. With this unique blend of qualities, Attila very nearly dictated Europes future.


In the end, his ambitions ran away with him. An insane demand for the hand of a Roman princess and assaults too deep into France and Italy led to sudden death in the arms of a new wife. He did not live long enough to found a lasting empire--- but enough to jolt Rome toward its final fall.


In this riveting biography, John Man draws on his extensive travels through Attilas heartland and his experience with the nomadic traditions of Central Asia to reveal the man behind the myth.