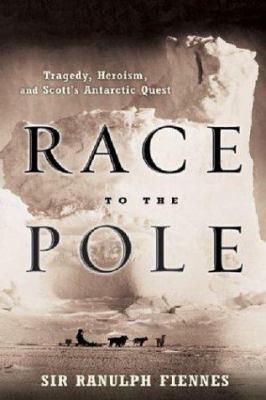 DDC classification:
Contents:
Markham's grand design -- Torpedo Lieutenant Scott -- Order out of chaos -- Through the pack ice: 1901-1902 -- Nudging the great barrier: 1902 -- Dogs, skis, and men -- The first winter -- The southern journey: 1902-1903 -- Lost on the Plateau: 1903-1904 -- A promise broken -- The race begins: 1910 -- Near disaster: 1911 -- The worst journey: 1911 -- The dangerous glacier -- The black flag -- Intimations of tragedy -- The greatest march ever made -- The legacy -- The last word.
Review: "During the Golden Era of Exploration, Captain Robert Scott and his competitor Roald Amundsen conquered the unconquerable: Antarctica. This perilous race to the South Pole claimed the life of Scott and became the stuff of legend, as well as endless scrutiny. In this history of Captain Scott and his fatal journey, renowned modern-day explorer Sir Ranulph Fiennes, holder of ten world expeditionary records, has written on this hotly debated subject." "Fiennes offers an account of Scott's motivations and aspirations for the Pole, and his historic clash with Amundsen over goals and approaches. Fiennes highlights the unpredictably disastrous weather patterns that led to the extreme cold that ultimately doomed Scott's return trip."--BOOK JACKET.
Tags from this library: No tags from this library for this title. Log in to add tags.

During the Golden Era of Exploration, Captain Robert Scott and his competitor Roald Amundsen conquered the unconquerable: Antarctica. This perilous race to the South Pole claimed the life of Scott and became the stuff of legend, as well as endless scrutiny. In this compelling, meticulously researched biography of Captain Scott and his fatal journey, renowned modern-day explorer Sir Ranulph Fiennes, holder of 10 expeditionary records, has written what is sure to become the definitive book on this hotly debated subject.

Race to the Pole provides a level of immediacy and accuracy that no other account has ever approached. Fiennes gained the exclusive cooperation of the Scott estate, as well as access to the descendants of key players, including those of Amundsen. As an explorer who has led over 30 expeditions, including the first polar circumnavigation of the earth and the first unsupported crossing of the Antarctic continent, he has firsthand knowledge of the grueling feat that Scott and his team undertook, as well as the physical tortures they endured.

Infused with the intensity of fiction and exhibiting an exhaustive eye for detail found in the greatest historical biographies, Race to the Pole is a prodigious achievement and certain to become a classic in the literature of exploration.

"During the Golden Era of Exploration, Captain Robert Scott and his competitor Roald Amundsen conquered the unconquerable: Antarctica. This perilous race to the South Pole claimed the life of Scott and became the stuff of legend, as well as endless scrutiny. In this history of Captain Scott and his fatal journey, renowned modern-day explorer Sir Ranulph Fiennes, holder of ten world expeditionary records, has written on this hotly debated subject." "Fiennes offers an account of Scott's motivations and aspirations for the Pole, and his historic clash with Amundsen over goals and approaches. Fiennes highlights the unpredictably disastrous weather patterns that led to the extreme cold that ultimately doomed Scott's return trip."--BOOK JACKET.

Fiennes, the first man to reach both Poles on land and the only person awarded two clasps to the Polar Medal for both Arctic and Antarctic exploration, provides a gripping, must-read story of Capt. Robert Falcon Scott's legendary Antarctic expeditions. In his determined research, Fiennes gained the exclusive cooperation of the Scott estate, as well as access to the descendants of key players. Fiennes briefly summarizes Scott's family background before detailing his 1901-03 attempt to reach the South Pole and then presenting a thrilling, masterly explanation of his successful 1910-12 bid (though Scott perished on the return journey). This exhaustive analysis conveys the edge-of-life reality of late 19th- and early 20th-century Antarctic expeditions and discredits Roland Huntford's anti-Scott title, Scott and Amundsen. Fiennes has led over 30 expeditions himself, and his firsthand knowledge of the grueling realities Scott faced sets his work apart from the swelling literature on the explorer. Highly recommended for all academic and larger public libraries. Dale Farris, Groves, Texas (c) Copyright 2010. Library Journals LLC, a wholly owned subsidiary of Media Source, Inc. No redistribution permitted.

"We are weak, writing is difficult, but... I do not regret this journey," quotes Fiennes from one of the last letters of Capt. Robert Scott, who reached the South Pole in the summer of 1912 and then perished on the return trip. For generations of Englishmen, Scott was a hero. In the late 1970s, however, a bestselling biography called Scott's exploits into question and his reputation suffered. In this finely honed and riveting account of adventure, death and betrayal, Fiennes, who was the first man to reach both poles by land, seeks to reclaim Scott's place in the pantheon of great and honorable explorers. Fiennes details the tortuous conditions and grim reality of Antarctic exploration at the turn of the last century. Throughout the ordeal, Scott showed leadership, compassion and an unquenchable will to live. Alas, these attributes proved insufficient in the face of a blinding blizzard; he starved and froze to death on his journey home. In a gentle and urbane tone, Fiennes frequently cites his own extraordinary experiences to give perspective to Scott's story. In Fiennes's estimation, Scott succeeded where others failed: he respected his men, was the pride of an empire and made a legitimate and lasting contribution to scientific understanding. four 8-page b&w photo inserts, maps. Agent, Ed Victor. (Nov. 3) (c) Copyright PWxyz, LLC. All rights reserved

"Had we lived, I should have had a tale to tell of hardihood, endurance, and courage of my companions," wrote the doomed British polar explorer Captain Robert Scott of his 1911-2 expedition to the South Pole. He and two companions perished in a raging blizzard during their return, discouraged that their Norwegian competitor Roald Amundsen had conquered the pole a month before them. For decades, Captain Scott was a legendary hero, but Roland Huntford's book Scott and Amundsen (CH, Nov'80) crushed his reputation, causing many to question Scott's decisions on the ice. Now Fiennes, an experienced polar explorer, draws from extensive research including family papers and his own polar knowledge to restore Scott's status. Fiennes outlines Scott's background and then carefully details his 1911 expedition from the planning stages to the substantial media coverage following its demise. Photographs, maps, and extensive footnotes are included; a glossary also would have been helpful. Fiennes is successful on two levels: he reestablishes Scott's reputation by discrediting Huntford with convincing arguments, and he brings Scott's tragic story to life by recollecting his own harrowing battles with the polar "icy version of hell." This is an irresistible read. ^BSumming Up: Highly recommended. All public and academic levels/libraries. S. R. Moore University of Louisiana at Lafayette

Robert Scott, a British naval captain, entered into legend when the Antarctic exploration party he headed in the polar summer of 1911-12 failed to return home. Fiennes, an accomplished explorer and travel writer, evokes a ringing you-are-there tone in his authoritative reconstruction of that fateful trip in a book that also serves as a comprehensive biography of Scott himself. Scrupulously researched (with the cooperation of the Scott estate) and astonishingly felt--given Fiennes' extensive travel exploration experience, including polar trips--this account follows a fascinating and difficult man, born delicate, weak chested, moody, quick tempered, and inclined to laziness, who tested himself all the way to his last act: freezing and starving to death on the unsuccessful return leg of his exploratory push to the pole. Fiennes' treatment defines creative nonfiction; of the many books, several of them recent, on Scott's expedition, this one will prove a popular addition to active travel-literature collections. --Brad Hooper Copyright 2004 Booklist

Polar explorer-turned-author Fiennes revisits Robert Scott's ill-fated South Pole journey and counters latter-day debunkers who've set about cutting the great English hero down to size. Author of several true adventure tales based on his own various journeys (Mind Over Matter, 1994, etc.), Fiennes brings his expertise to bear as he retells the story of one of England's most cherished sons. Scores of others may have written of Scott, but, Fiennes points out, none of them have traversed Antarctica on foot, as this writer has. Having established his bona fides, and an authorial voice that brooks no nonsense, Fiennes then details Scott's first and last trips south. We meet the young explorer as he angles for the role of expedition leader, achieves it in 1900, mans and outfits the operation, and plunges into exploration of the harsh continent. This first journey sets the stage for the better-known trip a decade later, in which Norwegian Roald Amundsen stole a march on England and made it to the South Pole a few weeks before Scott's team. Fiennes presents this tale of betrayal--Amundsen had set sail for the North Pole and then abruptly changed course for the Antarctic--with an immediacy that gives the old story fresh sting; his way with the telling detail and a sense of urgency keeps what could be a cumbersome retread bowling along at a great pace. The chronicle of Scott's last days, slowly starving and freezing in a tent just a few miles from a food depot, is particularly well rendered. Fiennes couples his admiring but clear-eyed portrait of a flawed hero with righteous indignation; when he goes after individual authors he feels have got Scott all wrong, the gloves are off. A marvelous plunge into the arcana of Scott's world--lengthy discussion of the number of calories necessary for a day of sledging, anyone?--and the many myths that followed his glorious failure. Copyright ©Kirkus Reviews, used with permission.
More book reviews at iDreamBooks.com