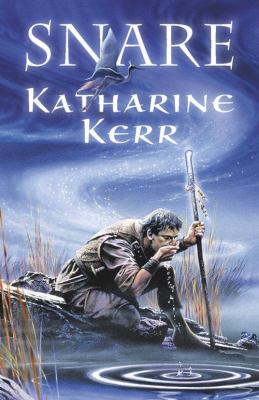 Snare : a novel of the far future /

A gripping fantasy adventure from the author of the Deverry series, set far in the future on the strangely beautiful but inhospitable planet Snare.

On an inhospitable desert planet colonized by humans, three distinct groups attempt to coexist: those who follow the teachings of the Third Prophet, the mounted nomadic tribes of the purple grasslands, and the sentient lizards known as the Cha'Meech. When a group of Islamic believers who oppose the tyranny of their current rulers travel in search of a leader who can bring them justice, they find their destinies caught up with a Spirit Rider of the grasslands, a Cha'Meech seeking new ideas, and a "sorcerer" obsessed with discovering a way to travel to the stars once again. The author of the popular "Deverry" series turns to the cultures of the Middle East for her latest tale set in the far future. Compelling male and female characters and a thoughtful premise make this epic adventure a strong addition to most sf collections. (c) Copyright 2010. Library Journals LLC, a wholly owned subsidiary of Media Source, Inc. No redistribution permitted.

Popular fantasy author Kerr (the Deverry series) once again crosses genres to deliver a large-scale SF adventure, with crowd-pleasing results. Three very different groups of human settlers go, not all willingly, to the planet Snare: a band of Islamic fundamentalists, a group of horse tribes and the pragmatic Cantons people. All descend on Snare's indigenous reptilian species the ChaMeech, and eight centuries of territorial and social turmoil follow. In Kazrajistan, the despotic Gemet Great Kahn rules the followers of the Third Prophet, but a secret rebel organization led by Captain Idres Warkannan seeks to restore the rightful heir, Jezro Kahn, long assumed murdered by Gemet. Warkannan sets out to find Jezro with his nephew Arkazo and Yarl Soutan, a renegade Cantons sorcerer, who claims to be searching for the lost Ark of the Covenant, the settlers' original ship. Meanwhile, suspicious of Soutan and Warkannan, Gemet sends Zahir Benumar, one of his elite warriors, to discover their plans. In the guise of a disgraced soldier, Zahir joins a horse tribe led by the inquisitive Spirit Rider Ammadin, hoping to use the tribe as cover while he follows Soutan's trail. Matters grow more complicated when a ChaMeech named Water Woman asks Ammadin's help and tells her of a powerful sorceress named Sibyl, who may be the last link between Snare's inhabitants and their distant past. Though the ending falls a little flat, Kerr masterfully manipulates the converging plot lines. (Apr. 23) (c) Copyright PWxyz, LLC. All rights reserved

Kerr turns from Celtic fantasy to a capable variation on a venerable sf theme: the human settlement on a distant planet that loses space-faring technology. On Snare, areas habitable by humans are limited, but human perversity and rivalry are not. The urban Kazraks follow a variant of Islam; the nomadic Comnee keep their wealth in horse herds. Meanwhile, the planet's aboriginal inhabitants, the Cha'Meech, are suffering from human incursions into what is left of their territory. In due course, the Kazraks start trying to overthrow their despot, but their resistance leader is hiding among the Comnee. For their part, the Cha'Meech have an innovative leader, who may remind historically informed readers of nineteenth-century Shawnee chief Tecumseh. Also on hand is a "sorcerer" who is obsessed with reinventing space flight, knowledge of which is more legendary than historical on Snare. The characterizations aren't up to the level of those in Kerr's Deverry saga, yet this competent performance is likely to please Kerr's fans and win her new ones. --Roland Green

In this hefty tome, Kerr (The Shimmering Door, 1996) turns from Celtic-tinged fantasy to sweepingly far-future adventure on an alien world. The plot is built around Jezro Khan, the exiled brother of the corrupt ruler of Kazrajistan, an Islamic society. A former Kazrak cavalry officer named Warkannan and a "sorcerer" named Soutan, a native of the Cantons, where Jezro is in exile, lead an expedition to convince Jezro to overthrow the regime. At the same time, the Chosen (a fanatical Muslim sect whose members act as the ruler's secret police) have sent an assassin, Zayn, to prevent Jezro's return. To reach him, both groups must cross the grasslands, a wilderness inhabited by the alien Cha'Meech and by human nomads whose low-tech society centers on horses. Along the way, Zayn attaches himself to Ammadin, a woman who serves as Spirit Rider to a nomadic company headed into the Cantons; as a result of his experience with the nomads, he finds himself beginning to question his mission. Meanwhile, Soutan makes use of high-tech "magic" to become aware of Zayn's mission, and Jezro's followers make several attempts to kill the assassin. When Ammadin makes contact with a Cha'Meech woman who convinces her to meet her in the wilderness beyond the Cantons, representatives of all four main societies come into a conflict that's eventually resolved by a literal deus ex machina who brings about a major reorganization of the planet's complex political makeup. The various societies are interestingly contrasted, and the world-building is generally convincing if not especially original. While the plot sometimes moves slowly, Kerr keeps the reader guessing at the moral alignment of several major characters and provides a conclusion worth the convoluted path. Solid SF adventure with a reasonable quota of interesting ideas for readers to chew on. Copyright ©Kirkus Reviews, used with permission.
More book reviews at iDreamBooks.com