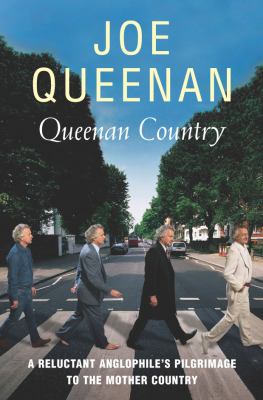 Queenan makes a solitary pilgrimage to Great Britain. Freed from the obligation to visit relatives Queenan decided that he would not come back from Albion until he had finally figured out what made the British tick. At the end of his epic adventure, the author returns chastened, wiser and happier...

Humorist Queenan calls this account of his 2002 trip to Great Britain "an affectionate jeremiad," conveying both his emotional ambivalence and displaying his favorite rhetorical device, the oxymoron. The West End musical We Will Rock You is "triumphantly cretinous"; a village woman is "belligerently harmless"; the museum curator wears an "ecstatically sober dress," etc. More broadly, contradiction is basic both to Queenan's humor and to his love-hate relationship with the British. He loves their "arch phrasing, infectious understatement and delightful euphemisms," just as he hates when all that posturing culminates in "the twit," that "master of rehearsed eccentricity." As with many travel accounts, one learns more about the traveler than about the locale. Queenan is a connoisseur of bad art; he can endure roomfuls of bad paintings at the Tate, just to make naughty remarks about the "insidious" hairstyles of yesteryear. Madame Tussaud's? It's "insufficiently absurd... nowhere near as bad as it ought to be." Conversely, he's thrilled to book a room at Durham's 500-year-old castle, complete with ghosts and a view of the cathedral. Indeed, the "American Dream," as Queenan explains it, is to stand on a fog-swept London street, watching the bobbies and dodging the double-deckers. As he says, there "isn't anything in the world better than riding a London double-decker bus." Hand-sell to the tweedies? Agent, Joseph Vallely. (Nov. 4) (c) Copyright PWxyz, LLC. All rights reserved

Who knew that Joe Queenan--who years ago called the English pasty-faced, mean-spirited, stingy, badly-dressed, anal-retentive, unfriendly, unadventurous, unimaginative people --could bring himself to write this book-length love letter to the mother country. Perhaps his English wife of 25 years finally softened him up. He fights the Joe Queenan fight: railing here against Paul McCartney, Pre-Raphaelites, Cats, English haircuts and public transportation, Fergie, Chelsea football supporters, Rod Stewart's Great American Songbook, and more. But the complaints are outnumbered by Queenan's love of a nice cup of tea, England's circuitous roads and stone houses, its writers (Swift, Dryden, Pope, Boswell, Samuel Johnson), its domestic niceties, and its ebulliently shabby pubs. Queenan's is not a quickie romance; nor is this book an afterthought. It is written with the depth and detail of someone who's paid attention to his subject for a long time. --Alan Moores Copyright 2004 Booklist

Prolific social critic Queenan (True Believers, 2003, etc.) considers Queen (but not much) and country (more, from Glasgow to Penzance) and delivers the age-old I-kid-because-I-love-you hustle. Because the subject can't be encompassed in one volume, it's far from a comprehensive Baedeker. At times, Queenan offers a Perelman-on-the-road style, sometimes it's Mencken-at-home, on occasion it's snarky and usually persnickety in its take on Old Blighty. From the heydays of Boadicea and Richard the Lion Heart to Churchill and Thatcher the Iron Heart, things, in Queenan's view, haven't changed much. His British spouse always knew, we can be sure, that Noddy's car goes "parp!" and is never dismayed by clotted cream. Britons at home are still endearingly crazy, even fruitcake nuts. From York to Liverpool, from Hadrian's Wall to Tintern Abbey, he finds wonderful eccentricities and appalling pop-culture artifacts. In the latter category, the author places most of West End theater (case in point: The Mouse Trap) and the oeuvre of Sir Paul McCartney. Indeed, there's much blather about musical taste withundue regard to Liverpuddlian tribute bands. While Sting is okay, Christopher Hogwood needs some correction, and Lloyd Webber's crimes, we're reminded, are horrendous. As a child, the author was captivated by Beau Geste and the myth of the inflexible upper lip. High in the Highlands, cozy in the Cotswolds, and besotted with history--of which there is simply too much--Queenan rants about legend in Glastonbury, choochiness in London, and all things twee. In its juicier moments, this apple doesn't fall far from the twee, though the usually dyspeptic author notes that he's personally "more sarcastic than arch." Waxing wroth, Queenan gets our British cousins to show us their knickers. They get up his nose, so he hits our funny bones in this antic panto. With a comic crumpet, Queenan leaves his love in Albion. It's a bit of alright, Percival. Copyright ©Kirkus Reviews, used with permission.
More book reviews at iDreamBooks.com