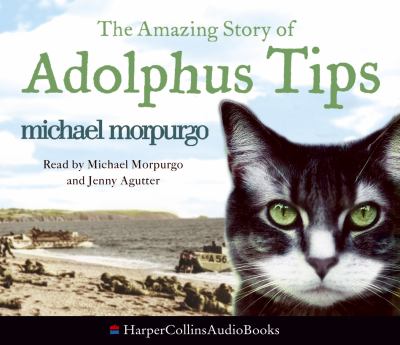 Genre/Form: Children's audiobooks.DDC classification: Read by Michael Morpurgo and Jenny Agutter.Summary: When Boowie reads the diary that his grandmother sends him, he learns of her childhood in World War II England when American and British soldiers practiced for D-Day's invasion in the area of her home, and about her beloved cat, Adolphus Tips, and the cat's namesake.
Tags from this library: No tags from this library for this title. Log in to add tags.
Fiction notes: Click to open in new window

A heartwarming tale of courage and warmth, set against the backdrop of the second world war, about a cat who survives against the odds. Read by Jenny Agutter and the author. "Something's up. Something big too, very big. At school, in the village, whoever you meet, it's all anyone talks about. It's like a sudden curse has come down on us all. It makes me wonder if we'll ever see the sun again." It's 1943, and Lily Tregenze lives on a farm, in the idyllic seaside village of Slapton. Apart from her father being away, and the 'townie' evacuees at school, her life is scarcely touched by the war. Until one day, Lily and her family, along with 3000 other villagers, are told to move out of their homes - lock, stock and barrel. Soon, the whole area is out of bounds, as the Allied forces practise their landings for D-day, preparing to invade France. But Tips, Lily's adored cat, has other ideas - barbed wire and keep-out signs mean nothing to her, nor does the danger of guns and bombs. Frantic to find her, Lily makes friends with two young American soldiers, who promise to help her. But will she ever see her cat again? Lily decides to cross the wire into the danger zone to look for Tips herself... Now, many years later, as Michael is reading his Grandma Lily's diary, he learns about The Amazing Story of Adolphus Tips - and wonders how one adventurous cat could still affect their lives sixty years later.

When Boowie reads the diary that his grandmother sends him, he learns of her childhood in World War II England when American and British soldiers practiced for D-Day's invasion in the area of her home, and about her beloved cat, Adolphus Tips, and the cat's namesake.

As he did with his WWI-era novel Private Peaceful, Morpurgo once again sets up a framing story for this tender novel about a family living through WWII in rural England. Shortly after Boowie's grandfather dies, his grandmother Lily takes a mysterious trip. Lily then sends him a collection of her diary entries from 1943, written mostly after her family was forced to evacuate from their seaside home, along with all the other residents of her village (Allied troops-mostly Americans-needed the beach to train for D-Day). During the move, the then 12-year-old Lily loses her cat, and her search for Tips gives her an upfront look at war's dangers (she sneaks into a restricted area, stumbling into shelling practice and live fire). She also makes a connection with an American soldier named Adolphus (or Adie) who tells Lily she's like "a ray of Atlanta sunshine." Readers will likely find a couple of impassioned speeches moving but rather scripted. Instead it's the small moments that will most stick with readers, such as when Barry, a 10-year-old evacuee from London, promises Lily he will not pick his nose if he can stay with her family, or when Adie and his friend return Tips to Lily, without their helmets on, making the girl notice that "they looked younger somehow, not men at all like the other soldiers. More like boys." Readers may not be surprised when Boowie's grandmother's reveals her secret, but they will be touched nonetheless. And they will learn about another important time in history. Ages 7-10. (Apr.) Copyright 2006 Reed Business Information.

Gr 5-7-Morpurgo frames this story with a grandmother sharing her girlhood journal with her grandson and a letter explaining what she has recently done. In the main story, Lily is 12 in 1943 and lives in southern coastal England. The war brings a foreign teacher, American soldiers, evacuees from London, and the sound of warplanes to their rural area. The girl's family is forced to move from their farm to an uncle's so the army can use their land to practice sea landings. A boy evacuee moves in with them. Lily's rocks during this unsettled time are her cat, Tips, and the friendship she strikes up with a black American soldier, Adolphus, better known as Adie. Decades later, Lily sees Adie and his son on the beach. Their friendship is rekindled and, after her husband's death, she visits him in Atlanta, GA. As the story ends in the present, she tells her grandchild that she and Adie have just married and that she is bringing him home to London with her. This is an appealing story, but it has a nostalgic quality that may limit its interest to children.-Jane G. Connor, South Carolina State Library, Columbia (c) Copyright 2010. Library Journals LLC, a wholly owned subsidiary of Media Source, Inc. No redistribution permitted.

Gr. 4-7. Following a grandson's memories of riding on a motorbike with his beloved grandmother, Lily, this story goes back in time to Lily's journal entries, made during World War II in Britain, which show her as a fiercely independent person even then--as angry at her family as she is at the enemy. Lily, 12, feels guilty about quarreling with Dad before he left to fight (what if he gets killed?), but her most immediate concern is finding her beloved cat, Tips, which goes missing after the family is forced to evacuate its coastal farm to make room for the army to rehearse the invasion of Normandy. She is helped by a kind, black GI, Adolphus (Adie ), with whom she develops a bond. The personal story of anger and love is as gripping as the war drama, and Morpurgo includes a fascinating note about the invasion rehearsal and why its history is seldom told. --Hazel Rochman Copyright 2006 Booklist

Lily Tregenza's diary entries provide an engaging glimpse of the changes wrought upon her family farm and small village on the Devon coast during the months leading up to D-Day. Her father is off repairing engines in the African desert, her new classmate Barry is an evacuee from London, the village is full of Yankee soldiers and her cat, Tips, keeps disappearing. Most dramatically, the villages and farms are evacuated as the Allies take over the beaches to practice in preparation for landing in France. Morpurgo's voice for 12-year-old Lily is clear and believable. A framing story for Lily's journal--that she, in her 60s, sent the pages about these months in 1943 and 1944 to her 12-year-old grandson--gives a sweet closing to Lily's account of her friendship with two kind American soldiers. Readers drawn to the wonderful green eyes of the cat on the cover may find their disappointment that this isn't really a cat story assuaged by the considerable charm of Lily's narrative. (Fiction. 8-11) Copyright ©Kirkus Reviews, used with permission.
More book reviews at iDreamBooks.com