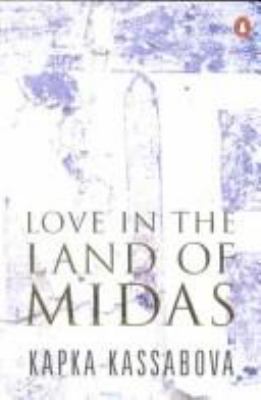 Love in the land of Midas /

A love story that crosses generations and continents, from post-war Europe to the present day. The legends of the Greek myths are diffused with the complicated history of the Balkans in a story that takes the reader into the lives of an unforgettable cast of characters.

The Bulgarian-born New Zealander's second novel (after Reconnaissance, 2000, not reviewed): a flawed tale of star-crossed lovers in war-torn Greece. Greece, bowed and bloodied in the years immediately following the Nazi occupation, has been converted into the kind of world-class killing field only civil wars manage to achieve. And though the action of the story shifts back and forth in time, nothing that happened in 1948 has been forgotten or forgiven in 1998. Kassabova's focal points are two pairs of lovers. Pascal, a brilliant French journalist, meets Daphne, an incomparably beautiful Greek insurgent, on the battlements. He's sympathetic to her cause; she's willing, perhaps even eager, to die for it. Thrown together, suffering privation and danger together, they become necessary to each other in a way that Pascal and his wife never were. But the vagaries of war drive them apart, and they lose each other, seemingly forever. Fifty years later, the other pair, Veronique and Theo, appear. She, too, is incomparably beautiful, though "parched, bored," and deeply troubled. Veronique is a young Frenchwoman on a bootless errand involving her adored and recently deceased father. Theo, a native New Zealander with roots in Greece, encounters her in the town of Thessaloniki, where he has gone to visit his grandmother. "With devastating precision," he falls in love. Romance with Veronique, however, is no picnic. Hooked on heroin and other self-destructive habits, she forces a separation Theo hopes will be temporary. But when 1948's secrets become 1998's bitter truths, the chasm between them widens in a way neither could have predicted. Generally well-written despite occasional howlers ("questions stumbled into each other and fell collectively down the gutter of her logic"), but the plotting is heavy-handed and the motivations often those of daytime drama.
More book reviews at iDreamBooks.com