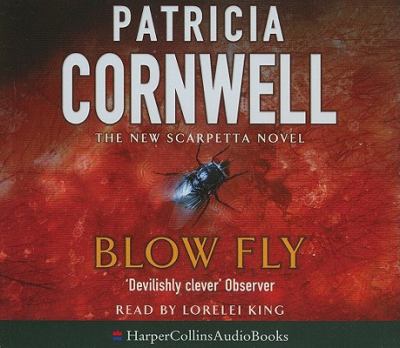 The Twelfth Dr Kay Scarpetta Novel. Dr Kay Scarpetta has left Virginia in quest of peace but instead finds herself drawn into baffling, horrific murders in Florida, where she becomes entangled in an international conspiracy that confronts her with the shock of her life.

Dr. Kay Scarpetta (The Last Precinct) is back-this time as a private forensic consultant. First, she is called to Baton Rouge to help investigate a socialite's mysterious death and perhaps provide insight about a serial killer on the loose there. Then she receives a letter from Jean-Baptiste Chandonne, the infamous Loup Garou (Black Notice), who nearly killed her several years before. With his execution approaching, Chandonne claims that he has information that could destroy his family's international cartel, but he will only give it to Scarpetta. As she becomes more involved in her investigations in Louisiana, Scarpetta begins to suspect that the crimes are somehow tied to Chandonne and that she has become a pawn in his powerful family's grasp. What she finally discovers stuns her to the core. This is, in some ways, the most shocking Scarpetta installment, and readers new to the series might find it confusing. Fans will definitely want it, though. Highly recommended. [Previewed in Prepub Alert, LJ 6/1/03; a Literary Guild, Doubleday Book Club, and Mystery Guild main selection.]-Leslie Madden, Georgia Inst. of Technology, Atlanta (c) Copyright 2010. Library Journals LLC, a wholly owned subsidiary of Media Source, Inc. No redistribution permitted.

"Please don't go there. The past is the past," sighs New York Assistant District Attorney Jaime Berger, who herself was introduced in Cornwell's last Kay Scarpetta novel, The Last Precinct (2000). Alas, many of Cornwell's fans are bound to agree. One fascinating nonfiction bestseller (Portrait of a Killer: Jack the Ripper, Case Closed) later, Cornwell now returns to Scarpetta, formerly Virginia's chief medical examiner. From the start, however, the formidable author is up against the equally formidable task of getting her charismatic main character off ice and back in action. We encounter Scarpetta languishing in a crumbling little rental house in Florida. She has taken refuge there and become a private forensic consultant after she was driven from her job for her alleged involvement in the murder of a deputy police chief. The violent death of her lover, Benton Wesley, the brilliant FBI psychological profiler, has left her filled with an unappeasable grief. When the coroner in Baton Rouge asks her advice on a cold case concerning an affluent woman found dead of a drug overdose in a seedy hotel, it seems little more than a diversion. Yet it becomes clear that the overdose may be related to a fresh string of serial killings. Also disturbing Scarpetta's somber peace is a troubling letter from someone out to kill her, the sick and obsessed death-row inmate Jean-Baptiste. When Scarpetta is at last allowed to get back to business, she is a feisty, independent powerhouse whose capacity to concentrate and observe rivals Sherlock Holmes's. But too much of this book is bound up in retrospective musings about events in previous books. The great Scarpetta, her fiery crime-busting niece, Lucy, and a colorful supporting cast deserve better. 1,000,000 first printing; Literary Guild, Doubleday Book Club and Mystery Guild main selections; foreign sales to Finland, France, Germany, Holland, Italy, Japan, Spain and the U.K.. (Oct. 13) (c) Copyright PWxyz, LLC. All rights reserved

Kay Scarpetta fans will miss their favorite forensic pathologist in this new thriller, as Cornwell cedes much of the spotlight to other characters in the long-running series. Lucy, Kay's defiant niece, and Marino, the bad-tempered, opinionated cop, are here, as are several familiar depraved psychopaths--among them, Wolfman Jean-Baptiste Chandonne and his twin brother, who first surfaced in Black Notice (2000). It appears that Chandonne, whose execution date is drawing near, wants to see Kay, ostensibly to reveal information about his family that will ensure the collapse of their Mob cartel and to have her administer the drug that will end his life. But, as usual in Cornwell's more recent books, absolutely nothing is what it seems. Granted, there are some compelling (and gruesome) moments, and a few loose ends from previous books are finally taken care of: Marino's foul son is killed and left for maggot food (thus the title), and Kay's great love, Wesley, comes back from the dead (he's been in a witness protection program). Otherwise, though, this is a murky stew, indeed, with action careening in way too many directions. Oh, for a return to the Cornwell who created the tough but vulnerable Scarpetta, who, at center stage, used her intellect and forensic training to solve a more straightforward mystery. --Stephanie Zvirin Copyright 2003 Booklist

Fresh from tussling with a nonpareil real-life serial killer (Portrait of a Killer: Jack the Ripper, Case Closed, not reviewed), Cornwell brings back forensic pathologist Kay Scarpetta for her first outing in three years. The interval's been so tough on Scarpetta that now she requires a third-person narrator and chapters short as a gasp. She's left her job as Virginia's Chief Medical Examiner, and she's been mourning her FBI lover Benton Wesley, not realizing her niece Lucy Farinelli helped him fake his death so that he could go underground. Jean-Baptiste Chandonne, the Wolfman Scarpetta blinded and brought to book in The Last Precinct (2000), may be on Death Row in Texas, but he's still as dangerous as ever, promising Scarpetta help in tracking down the killer of Charlotte Dard in Baton Rouge eight years ago if she'll come visit him and promise to give him the fatal needle. Back in Louisiana, Jay Talley, Chandonne's handsome if equally depraved twin, is kidnapping, torturing, and murdering a series of middle-aged Wal-Mart shoppers in literally unspeakable ways. One problem this time, in fact, is that Cornwell never provides any of the unblinking set pieces that have made her so widely imitated. A more serious problem is that the perils feel recycled, shapeless, and so soaked in evil that they're headed nowhere in particular for Sisyphus Scarpetta. Copyright ©Kirkus Reviews, used with permission.
More book reviews at iDreamBooks.com