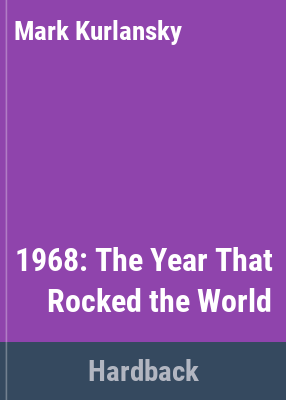 It was the year of sex and drugs and rock and roll; it was also the year of the Martin Luther King and Bobby Kennedy assassinations, Prague Spring, the Chicago convention, the anti-war movement and the Tet Offensive, the student rebellion that paralyzed France, Civil Rights, the generation gap, the beginning of the end for the USSR.

It was the year of the Prague Spring, student riots in Paris, the Mexico City Olympics where two American medal winners gave a Black Power salute, and the Democratic National Convention in Chicago, at which police clashed violently with protestors. Martin Luther King and Robert F. Kennedy were assassinated, the Vietnam War had divided the nation, and television was there to capture and broadcast it all. (LJ 1/04) (c) Copyright 2012. Library Journals LLC, a wholly owned subsidiary of Media Source, Inc. No redistribution permitted.

By any measure, it was a remarkable year. Mentioning the Tet offensive, the My Lai massacre, the assassinations of Martin Luther King Jr. and Robert Kennedy, the Democratic convention in Chicago, and the Prague Spring and its backlash gives only the merest impression of how eventful and transformative the year must have felt at the time. As Kurlansky (Cod, Salt, etc.) has made the phrase "changed the world" a necessary component of subtitles for books about mundane objects, his choice to focus on a year that so "rocked" the world is appropriate. To read this book is to be transported to a very specific past at once more naive and more mature than today; as Kurlansky puts it, it was a time of "shocking modernism" and "quaint innocence," a combination less contradictory than it first appears. The common genesis of demonstrations occurring in virtually every Western nation was the war in Vietnam. Without shortchanging the roles of race and age, Kurlansky shrewdly emphasizes the rise of television as a near-instantaneous (and less packaged than today) conduit of news as key to the year's unfolding. To his credit, Kurlansky does not overdo Berkeley at the expense of Paris or Warsaw or Mexico City. The gains and costs of the new ethic of mass demonstration are neatly illustrated by the U.S. presidential campaign: the young leftists helped force the effective abdication of President Lyndon Johnson-and were rewarded with "silent majority" spokesman Richard Nixon. 1968 is a thorough and loving (perhaps a bit too loving of the boomer generation) tapestry-or time capsule. Agent, Charlotte Sheedy. (Jan.) (c) Copyright PWxyz, LLC. All rights reserved

This often riveting tale captures the zeitgeist of an epochal year in modern history in its examination of worldwide events, ranging from the Tet Offensive in Vietnam to the election of Richard Nixon as president of the US. Particularly revealing are accounts of the mounting unrest in France that threatened Charles DeGaulle's regime and the Prague Spring in Czechoslovakia, where attempts unfolded to democratize communism, or bring about "socialism with a human face." Kurlansky tellingly relates the mass bloodletting that Mexico experienced shortly before hosting the 1968 Olympic Games and the emergence of a new generation in Poland willing to challenge cultural, social, and political constraints. The author offers intriguing biographical accounts of radical activists, including Columbia University's Mark Rudd, Poland's Adam Michnik, Germany's Rudi Dutschke, and Daniel Cohn-Bendit, another German national, who was studying in France. Many of the year's young radicals, including these four, were Jews committed to social action and willing to challenge government policies they viewed as intolerant, inhumane, or imperialistic. The book contains additional important observations regarding the assassinations of Martin Luther King Jr. and Bobby Kennedy, the Democratic National Convention in Chicago, and the Cuban Revolution. ^BSumming Up: Recommended. General readers and above. R. C. Cottrell California State University, Chico

Although it might have seemed logical to follow his successful books Cod (1997) and Salt (2002) with Olive Oil,urlansky has a different agenda this time out. But what can be gained from yet another Boomer report on the 1960s? Surprisingly, quite a bit. In examining the momentous events of 1968, he refolds the map so the U.S. is no longer the center of student protest. Though this spontaneous combustion of rebellious spirits around the world --including countries such as Poland, Czechoslovakia, Germany, France, and Mexico--may have drawn oxygen from the U.S. civil rights movement, other fuel for the fires was locally available: intense generational differences, hatred of the Vietnam War, and the rise of TV news. The role of media resonates throughout. As events unfold season by season, we're reminded that this was indeed the dawn of Marshall McLuhan's global village. And if we're stirred at remembering the passion of the young protesters, we may be sobered to consider whether we're now living in philosopher Herbert Marcuse's age of technological anesthesia. Despite a sometimes torrential flow of facts and figureheads,urlansky's writing remains accessible. He is as adept at discerning the way people move machines as he has been at discussing innovation's impact on people. This is very fine--and surprisingly timely-- although its scope and complexity may keep it from finding the broad popularity of the author's earlier works, where we delighted in the surprising histories of ordinary things. --Keir Graff Copyright 2003 Booklist

A masterful chronicle of a year when the world was living dangerously and everybody's hair was afire. Doing what he does best, Kurlansky (Salt, 2002, etc.) brings a descriptive glow to his subject, holding it up to the light and turning it in his hands. Kurlansky is not so much concerned with exegesis as narrative scope, though he's also happy to wade among the knots, thorns, and bafflements of 1968. It was a terrible, Dickensian year for the human toll it took in Biafra and Vietnam, across Europe, and in the US, but it was thrilling too, "a time when significant segments of population all over the globe refused to be silent about the many things that are wrong with the world." The author, who was 20 that year and very much a child of those times, makes real the passion that pervaded the air: the widespread antiestablishment, antiauthoritarian movements; the student--and, in some cases, worker--uprisings in Paris, Berlin, Prague, Mexico City, New York, and elsewhere; Tom Stoppard, Peter Brooks, and Julian Beck shaking up the theater; Jacek Kurón, Adam Michnik, and others acting as reluctant heroes in Poland; Tommie Smith and Lee Evans clenching their fists from the Olympic platform; SNCC eclipsing SCLC, and the rise of Black Power; television networks broadcasting undistilled and unpackaged news; feminism rising again. Instead of wanting to Be Like Mike, young people in 1968 aspired to act "como Che!" Assassinations, invasions, napalmings, and near-genocides made a grim backdrop for the year's millenarian dreams. Kurlansky is handy with the quick character sketch, but celebrities don't overwhelm the writing; he's more interested in context and events, circumstances and consequences, a good example being how he threads the US presidential race and its many permutations through the course of the narrative. Says so much so well about a year that still steals your breath away, even with so many of its hopes dashed. (Illustrations throughout) Copyright ©Kirkus Reviews, used with permission.
More book reviews at iDreamBooks.com