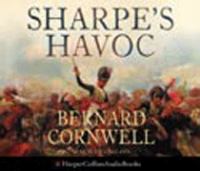 Re-issue to tie-in with publication of paperback. Sharpe's Havoc brings Sharpe to Portugal, and reunites him with Harper.

It is 1809 and Sharpe is trapped behind enemy lines in Portugal, looking for the daughter of an English wine shipper. However, with the coming of Sir Arthur Wellesley, he becomes the hunter, not the hunted - and is determined to have revenge on the men who double-crossed him.

Cornwell (Gallows Thief) continues his popular "Sharpe" series with this latest entry. It is 1809, and Napoleon has plans to annex the Iberian Peninsula; British troops are sent to help the Portuguese in their battle against the French. Sharpe and his small regiment of riflemen are separated from the main body of British troops, and once again find themselves in the thick of the action, which centers in and around the city of Oporto. Complicating matters is Kate Savage, the daughter of a British wine merchant in Oporto, whom Sharpe must find and escort to safety. Meanwhile, a French spy marries Kate solely to get his hands on her fortune. The action shifts between battle scenes and the spy, whom Sharpe unmasks. Although the outcome is never in doubt, this nevertheless makes for a rousing story. The reader is pleased to encounter an ongoing cast of characters, familiar from the previous books in the series. In an afternote, Cornwell mentions that this book is based on actual historical events and people. Recommended for popular historical fiction collections. -Fred M. Gervat, Concordia Coll. Lib., Bronxville, NY(c) Copyright 2010. Library Journals LLC, a wholly owned subsidiary of Media Source, Inc. No redistribution permitted. All rights reserved.

Sharpe fans who may have worried that Cornwell's popular series was drawing to a close can heave a sigh of relief-the 19th entry (after 2002's Sharpe's Prey) brings the up-from-the-ranks rifleman back to the Peninsular War where the series began, among such familiar comrades-in-arms as Sergeant Harper and the "old poacher" Dan Hagman. In the treacherous villain role without which no Sharpe adventure would be complete, the Shakespeare-quoting Colonel Christopher plays both sides of the fence in an effort to contrive a peace between the warring parties that will leave him a rich man. But Christopher hasn't reckoned with the new British commander, Sir Arthur Wellesley, the future Duke of Wellington, who arrives in time to catch Marshal Soult's invading army by surprise. Meanwhile, Sharpe and his men, cut off in a Portuguese village, hold off superior French forces with the aid of Lieutenant Vicente, a Portuguese lawyer, poet and philosopher turned soldier. Sharpe's antilawyer barbs, as well as some later banter about the troubled relations between the English and Irish and between the Spanish and Portuguese, provide comic relief, while Kate Savage, a naive 19-year-old Englishwoman seduced by Christopher, lends relatively minor romantic interest. A delicious scene at Wellesley's headquarters, in which Sharpe has to account for his seemingly inactive role, will please aficionados, as will the ringing words with which Cornwell closes his customary afterword on the historical background: "So Sharpe and Harper will march again."(c) Copyright PWxyz, LLC. All rights reserved All rights reserved.

Isolated but far from impotent, Sharpe and his trusty riflemen hold off vast Napoleonic forces in the Portuguese wine country. With years to go before the Corsican Menace is safely quarantined, there is never any doubt but that intrepid, supremely resourceful Richard Sharpe, amiable hero of 18 previous outings (Sharpe's Prey, 2001, etc.), will prevail, though Cornwell, always using good history and always explaining where he has fantasized, never fails to engross and beguile. Sharpe is every gentle reader's secret vision of his or her own self: the victim of idiotic superiors, the idol of his troops, unsure of his place in the world, utterly sure of his place in battle. And doesn't he go to the loveliest places! Now he's in greater Oporto, home to the great red wine and the great English red wine-exporting families, where Bonaparte's troops threaten the city and such lovely citizens as Kate Savage, heiress to House Beautiful and a port fortune, who has disappeared. Sharpe is on the scene because he and his riflemen have been cut off from their battalion and because shrewd Captain Hogan needs him around for the odd commando task. In this case, the task is dual: find Kate and keep an eye on a certain slippery Colonel Christopher. Hightailing it out of the city as the Emperor's troops invade, Sharpe is witness to the disastrous collapse of a bridge and is near victim himself of a French ambush. His bacon is saved by a band of Portuguese irregulars led by Lieutenant Vicente, a young philosopher-lawyer-poet learning army tactics on the fly. Sharpe and Vicente's united little bands find their way to Kate Savage's country estate, where Kate is about to marry the perfidious Colonel Christopher. How perfidious? Not only has he arranged a bogus wedding mass, but he's busy playing off subfactions of the French against each other. Fool that he is, the Colonel, like the French, fears nothing from the obviously ill-born Lieutenant Sharpe. The best stuff. Copyright ©Kirkus Reviews, used with permission.