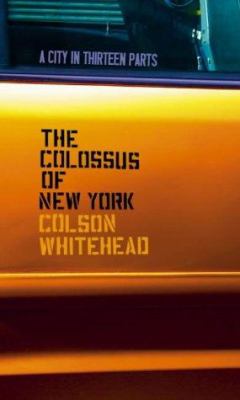 The colossus of New York : a city in thirteen parts / Colson Whitehead.

The novelist Colson Whitehead re-creates the exuberance, the chaos, the promise, and the heartbreak of New York. In this portrait of the greatest of cities, Colson Whitehead conveys with immediacy the feelings and thoughts of longtime residents and of newcomers who dream of making it their home. His style, a series of vignettes, meditations, and personal memories, is as multi-layered and multifarious as New York itself. There is a funny, knowing riff on what it feels like to arrive there for the first time; a lyrical meditation on how the city is transformed by an unexpected rain shower; while another captures those magical moments when the city seems to be talking directly to you, inviting you to become one with its rhythms.

Whitehead (The Intuitionist; John Henry Days) lays out a wildly creative view of New York City. To out-of-towners, Gotham is about famous places, but Whitehead's New York is not. It's more about a way of seeing. For example, "No matter how long you have been here, you are a New Yorker the first time you say, That used to be Munsey's, or That used to be the Tic Toc Lounge... when what was there before is more real and solid than what is here now." Whitehead begins with the bus ride into Port Authority, complete with impossibly heavy baggage, bathrooms braved by only the desperate and the seating strategies of experienced bus riders. He cuts to city feelings: the morning's garbage truck noises; the problem of rain; coping with rush hour. When he does write of celebrated places-Central Park, Coney Island, the Brooklyn Bridge-it's for the role they play in our ritual life: when we go, how we are when we're there and how it feels to leave. Whitehead is a master of the minutiae of the mundane. He takes you to the moment of a subway train leaving without you: could you have made it if you'd left a few seconds earlier? Should you take a taxi? You check the tunnel for the next train, fusing with thoughts of time as new passengers accumulate on the platform. This 13-part lyric symphony is like E.B. White's Here Is New York set to the beat of Ellington or Cage. (On sale Oct. 21) Forecast: Although the book probably won't sell well nationally, local radio promotion could help it become a hit in New York. Some of Whitehead's best passages are excellent read-aloud material and could be easily excerpted. (c) Copyright PWxyz, LLC. All rights reserved

Lovers of adventurous literary fiction relished Whitehead's novels, The Intuitionist (1998) and ohn Henry Days (2001), recognizing him as an original, sardonic, yet compassionate writer. Anointed with a MacArthur genius grant, Whitehead now presents a ravishing cycle of imaginative and evocative prose poems in tribute to his home, New York City, the quintessential metropolis of dreams. Writing in short, emphatic sentences, Whitehead riffs poignantly and playfully on myriad strategies for urban survival as he incisively distills the kaleidoscopic frenzy of the city into startlingly vital metaphors and cartoon-crisp analogies. Intensely sensory in his details, wistful and funny in his psychological disclosures, he makes everything come to mythic life, from the fury of rush hour to the strained etiquette of subway riders to Central Park, Times Square, Coney Island, and the Brooklyn Bridge. The mad choreography a rainstorm puts into motion, the rituals of downtown nightclubs, the horrors of the 9-to-5 routine, the waxing and waning of the self against the backdrop of so many other souls are all given a sharp, metaphysical twist in Whitehead's gorgeous rendering of New York as a colossal, ever-metamorphosing phantasm. --Donna Seaman Copyright 2003 Booklist

As ebullient as Walt Whitman and as succinct as Emily Dickinson, a young novelist (John Henry Days, 2001, etc.) looses his five senses on his native New York City--and allows the sixth some play, as well. Whitehead makes it both difficult and easy for readers in this astonishingly evocative view of Gotham. The difficulties all arise from his poetic language. He eschews question marks, commas, and much other interior punctuation, as if to say, "Slow down. You don't need that stuff to understand me." And his paragraphs will drive pedantic grammarians wild (even as they will delight the liberated), for he segues smoothly from first person to second to third--in both singular and plural--as if to ask (without the question mark and comma, of course), "Hey, what's the difference?" And yet . . . reading him is as natural (and as uncomfortable) as looking in a full-length mirror. It's as if Whitehead has heard all of our conversations, smelled our fears, tasted our successes, recognized our falseness, tapped our phones and our fantasies, and, yes, felt our pain. The volume comprises 13 short pieces that have both a loose chronological and a cyclical sense: morning to night, arrival and departure, birth and death. Near the beginning is a piece about the Port Authority bus station that deals with bus rides, uncertainties, stresses, and arrivals in the New World of Manhattan. Near the end is a snippet about a departure from Kennedy Airport; in the air, you look back over the city, says Whitehead, and you see such a vast expanse that "you realize you were never really there at all." In between are riffs on Central Park, the subway, rain, Broadway, Coney Island, the Brooklyn Bridge, and so on. And rippling just underneath the surface of many of the pieces are a certain sexual energy (a firm nipple here, an erection there) and some unobtrusive allusions to 9/11 (on the Brooklyn Bridge: "If it shakes it can fall"). Poetry in paragraphs. Copyright ©Kirkus Reviews, used with permission.
More book reviews at iDreamBooks.com