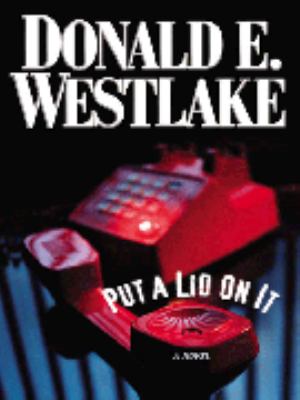 Somewhere out there is an October Surprise that will cost the sitting President of the United States the next election if it is unwrapped. A Washington man wants Meehan to steal the incriminating evidence in exchange for freedom from the Manhattan Correctional Center. The problem is that no one in Washington can keep their mouth shut... Copyright © Libri GmbH. All rights reserved.

When a lifetime criminal goes to work for politicians, it's up to the reader to decide who the real crooks are. Having burgled a truck that he didn't realize contained U.S. mail, Francis Meehan is serving his first stint of federal time. A week into his term, however, a visitor to the prison offers him a reprieve of sorts. To gain his freedom, Meehan has only to steal a videotape that may be of harm to the President, an item currently possessed by someone from the cryptically named "other side." Working with his lawyer and some trusted thieves, Meehan must not only find the tape but also beware of any potential double crosses by his employers. The irony of his situation he must commit a crime to get out of prison adds both to Meehan's character and the comic aspect of the novel. Westlake (Bad News) does another brilliant job, this time by contrasting the relatively smooth and efficient thieves with the bungling politicians. A tongue-in-cheek take on political scandal that belongs in all public libraries. Craig Shufelt, Lane P.L., Fairfield, OH (c) Copyright 2010. Library Journals LLC, a wholly owned subsidiary of Media Source, Inc. No redistribution permitted.

Every Westlake book surprises in a different way, from the hilarious Dortmunder series (Bad News, etc.) to the dark, ominous novels of suspense (The Ax, etc.), and this latest comic caper is no exception. Francis Xavier Meehan, one of Westlake's luckless crooks, is in federal prison for hijacking a mail truck he thought contained computer chips. A presidential reelection official offers him a pardon with a Watergate-type scheme: Meehan must steal a video that, if made public, may prevent the president's reelection. Meehan's court-appointed lawyer cuts the best deal she can for him, and we're off on the caper as Meehan assembles his heist crew, figures the logistics and cases the estate of the elderly, right-wing gun collector who has the video. Egyptian and Israeli spies, plus a plethora of presidential aides ("A hundred thousand big mouths," says Meehan about Washington insiders), provide intermittent interference. By the time Meehan learns the video involves national security and he's superfluous, we've also learned that he's a lot smarter and more savvy than the better-educated president's men. The novel ends with a typical Westlake twist funny and perfectly appropriate. Westlake hooks the reader from the first sentence, maintaining the suspense with unpredictable turnabouts and dead-on descriptions: a presidential aide has "a store of meaningless smiles like Halloween masks." Though not one of the author's very best, you'll read this one with a meaningful smile and many a chuckle. Mystery Guild Featured Alternate. (Apr. 24) FYI: MWA Grandmaster Westlake, who also writes under the name Richard Stark, has won three Edgar Awards. (c) Copyright PWxyz, LLC. All rights reserved

Adult/High School-A presidential reelection committee needs to retrieve an incriminating videotape from the Other Side, and, having learned something from history, they "outsource" the job to a professional thief. Francis Xavier Meehan, a career burglar, is just hunkering down to his first federal sentence when he is offered his freedom if he will pull off the heist. Soon this political innocent who has never heard of contributors' planes or October Surprises is playing power politics with the best of them. He brings in his own lawyer to protect his interests, enlists the aid of some fellow thieves, and calmly turns every unexpected development to his own advantage. This might sound fairly predictable, but in Westlake's masterful hands every page delights readers with satirical observations, unexpected twists, and an endless supply of laugh-out-loud zingers. All of this fast-paced fun is laced with sharp observations of contemporary life; light reading just isn't crafted any better than this. Readers who enjoy humorous fiction, satire, or crime-caper stories should be delighted with this book.-Christine C. Menefee, Fairfax County Public Library, VA (c) Copyright 2010. Library Journals LLC, a wholly owned subsidiary of Media Source, Inc. No redistribution permitted.

What a concept! Crime-caper Grand Master Westlake channeling Ross Thomas, the late virtuoso of novels featuring political chicanery in very high places. Professional thief Francis Meehan is sitting in the Manhattan Correctional Center and cursing the fact that the unmarked truck he boosted contained U.S. mail instead of computer equipment. One of the "ten thousand rules" that Meehan lives by is to avoid the feds. But a man named Jeffords shows up and escorts him from jail and into a corporate jet bound for the Outer Banks. The president's campaign committee needs a burglary performed, and they've learned from Watergate: if you need a burglary, hire a professional burglar. In return, they'll see that Meehan skates on the federal mail-theft charge. This is Westlake at the top of his game, by turns antic, unexpected, quirky, clever, and always, very funny. At first, Meehan demands to be sent back to MCC, because his rules include never working with amateurs. Then he requires that his public defender be flown down to represent him in negotiations with the pols. Once on the job, he finds that the rival committee to defeat the president has rent-a-thugs looking for him. And, of course, he's figured out a way to turn the political burglary into a personally lucrative felony. Even mediocre Westlake is a gift to crime fans, but this novel--top-shelf Westlake stirred with a twist of Thomas--is something to savor. Thomas Gaughan

Westlake, who usually tosses off punchlines with the zeal of a suicide bomber, misfires here. The set-up is promising enough: Francis Xavier Meehan, a career burglar up on federal charges for assaulting a truck incidentally carrying US mail (how was he to know?), is approached by Pat Jeffords, a politico who has decided, post-Watergate, to hire a real crook to redeem sensitive papers that could seriously jeopardize the president's reelection bid. Meehan agrees when he's offered a presidential pardon and spots a chance to make a bit on the side (the cache is secreted among the valuable antique firearm collection of rabid conservative Clendon Burnstone IV). Of course, since he's dealing with crafty pols like Jeffords and Bruce Benjamin, Meehan demands legal representation and soon draws in his court-appointed attorney, the feisty Elaine Goldfarb ("No details!" she shrills when Meehan starts to confide his illegal plans to her). In the meantime, Meehan assembles a gang-not quite as hapless as any of John Dortmunder's (Bad News, 2001, etc.)-cases Burnstone's estate, drives up and down the northeast corridor, and bumps into one situation after another that craves a payoff. But Meehan and the reader are both out of luck: His attempts lead to nothing but quiet fizzles, with barely a glimmer of a double-cross at the end. Few smiles, fewer laughs. Westlake will have to rev up his sense of foul play, and of humor, to deliver the political version of Elmore Leonard's Get Shorty he's assuredly capable of. Mystery Guild featured alternate selection
More book reviews at iDreamBooks.com