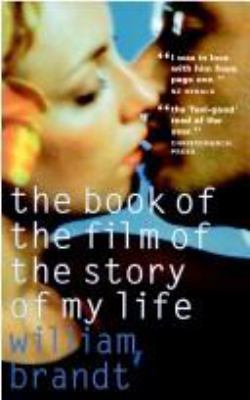 The book of the film of the story of my life / William Brandt.

At 42, Frederick Case doesn't have much to show for his life, and his dreams of cinematic glory are fading fast. His career has stalled at being a low-level script evaluator while his estranged wife, Sophie, is now a major movie star. So how does this basically nice guy turn his life around? Seizing on an invitation to a hedonistic weekend party, Frederick schemes to rekindle his marriage. The result is a plot that channels Bridget Jones via Pretty Woman. Like Bridget, Frederick is good at self-deprecating humor, getting caught in awkward moments, and tallying problem behavior, though he is more inclined to monitor his blood pressure than calories. He hires a pretty young prostitute and fellow New Zealander to play his new love and proceeds to stumble through paradise before emerging on the other side a wiser and more focused soul. The result is a light first novel that might have fared better as a movie. Recommended for larger fiction collections.-Jan Blodgett, Davidson Coll. Lib., NC (c) Copyright 2010. Library Journals LLC, a wholly owned subsidiary of Media Source, Inc. No redistribution permitted.

Fredrick Case, a 42-year-old would-be film producer, wastes his days screening rotten scripts ("thou art passing spunky in those tight's" [sic] reads one particularly egregious bit of dialogue) for a London production company. A charming loafer, he's used to sponging off his parents back home in New Zealand and basking in the attentions of his beautiful wife, the up-and-coming actress Sophie Carlisle. Too bad Mom isn't gonna send money anymore and Sophie's just left him for her dashing co-star, Matt Chalmers. It's time to take control! Which Frederick does with lovable buffoonery, as he plans to pursue Sophie to her rich friend's birthday celebration held on the volcanic island of Makulalanana. He knows from a fan Web site that Sophie is pregnant-and so the plot thickens. But what will the genre of this tale be? Frederick is crossing his fingers for romantic comedy. Amid a celebratory weekend planned by the friendly folks at Ecstatic Experiences Ltd., Frederick, aided by a delightful prostitute and new friend, Melissa, tries to win Sophie back and determine the paternity of her unborn child. Punctuated by excerpts from brilliantly bad screenplays and crackling dialogue, Frederick's comic adventures make a sophisticated light read for the cold heart of winter. Agent, Dan Mandel. (Feb.) (c) Copyright PWxyz, LLC. All rights reserved

In writer-actor Brandt's agreeably oddball first novel, a career underachiever explores the comparative unreality of the movies and real life. The whole thing is narrated by failed actor-film producer ÉmigrÉ Frederick Case. At 42, Case, a freelance reader of scripts for a London production company, is supported primarily by his rich parents back home in New Zealand. Furthermore, he's overweight, plagued with "moderate" hypertension, and has lost his actress wife, Sophie, following an argument over her right to perform an onscreen oral sex scene with overendowed matinee idol hunk Matt Chalmers. And that's just the set-up. Brandt careens engagingly through Frederick's awkward pursuit of self-esteem as he continues to strike out career-wise, gives a talk to star-struck prisoners, gets stuck with an inmate's lurid screenplay aimed at saving the world from sin, and--abetted by genial young hooker Melissa--plots to regain Sophie's affections ("I owe it to her and to me and to the narrative integrity of both our lives," he reasons). Things soon move to the volcanic island of Makulalanana, in the South Pacific, where movie mogul Charles Menard is celebrating his 40th birthday with several dozen intimate friends, including Frederick, Melissa (hired to pose as his girlfriend), Matt, and a hugely pregnant Sophie. Various misadventures with affable Makulalanananders, importunate drunks, sea snakes and undersea creatures, and with a guilt-ridden Matt illogically ensue. Frederick somehow survives it all, ending up back "home" in Auckland, reconciled to options that seem to have chosen him, though perhaps matured at last ("You learn to accept these things. That's what being forty is all about"). He's a little like J.P. Donleavy's immortal Ginger Man: a sardonic Wild Thing who learns he isn't so unconventional after all. A charmer. Let's hope they make a movie of it. Copyright ©Kirkus Reviews, used with permission.
More book reviews at iDreamBooks.com