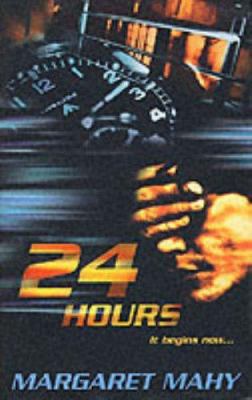 Genre/Form: Young adult fiction, New Zealand. | New Zealand fiction.Summary: During his first twenty-four hours after finishing high school, seventeen-year-old Ellis unexpectedly becomes part of an inner-city world far different from his comfortable life, which helps deal with his best friend's recent suicide. Suggested level: secondary.
Tags from this library: No tags from this library for this title. Log in to add tags.

Airfix is an iconic brand, with a wide range of models that include aircraft, ships, cars, and historical dioramas. This manual, produced in full collaboration with Airfix and Humbrol, is the ultimate modeler's guide. It covers techniques for all aspects of model making, from basic construction to applying decals and custom paint to super-detailing and customizing standard kits. Readers learn creative fixes for common challenges, even as they celebrate one of the hobby's most popular names.

Novel for young adults by a New Zealander.

Mahy (Memory; The Changeover) once again captures age-old yet contemporary adolescent sensibilities. Ellis, an aspiring actor who has just graduated from prep school, runs into an old public school friend who leads him on a 24-hour escapade into a very different social stratum. Together they end up in the Land-of-Smiles, a run-down former motel and gathering place for aging activists, tattoo artists, hairdressers and other fringe characters. Ellis develops a crush on Leona, the middle of three sisters who preside over the hotel and who have virtually raised themselves. For Leona, he embarks on a chase to find a kidnapped child, leading him simultaneously to the culpritDa boy from his own privileged societyDand to a newfound sense of self. Mahy laces Ellis's narrative with Shakespearean references both to contrast the hero's wealthy circumstances with the poverty of the Land-of-Smiles and to discuss metaphorically the prospect of death for those who fear it and those who do not. These references tend to romanticize hardship ("If you live our sort of life you get to love things that don't turn out quite right," says Leona's older sister), but the quick pace and assemblage of quirky, appealing characters will hook readers. Ages 12-up. (Oct.) (c) Copyright PWxyz, LLC. All rights reserved

Gr 9 Up-Take a walk on the wild side in an unnamed New Zealand city with aspiring actor Ellis, 17, who falls in with Jackie Cattle, a disreputable former schoolmate. Jackie uses Ellis to crash an elegant lawn party and pry Ursa and Leona, two beautiful sisters, from the nasty clutches of their rich host, Christo. Ellis drives the girls home to the weird, otherworldly "Land-of-Smiles" hotel, where their profane, scruffy surrogate family sweeps him into drunken oblivion. He and his newfound friends soon discover that a baby abandoned to their care has been kidnapped. A high-speed car chase ensues, Ellis falls in and out of love with Leona, and he gets a tattoo before puzzling out the identity of the kidnapper. The climax involves Ellis quoting Shakespeare from the dizzying heights of the old public library rooftop to save the baby from the suicidal Christo. Bizarre as it sounds, this energetic novel will entertain mature readers. A subplot about Simon, a former friend of Ellis's who committed suicide, is too abbreviated to carry much emotional weight. Otherwise, this is an edgy and highly charged introduction to some interesting characters.-Joel Shoemaker, Southeast Junior High School, Iowa City, IA (c) Copyright 2010. Library Journals LLC, a wholly owned subsidiary of Media Source, Inc. No redistribution permitted.

Gr. 9^-12. Friday at 5:10 p.m., 17-year-old Ellis is a restless, curly-haired, aspiring actor, just returned from prep school. Saturday at 4 p.m., he is a bald, tattooed hero on the television news. Set in New Zealand, this gripping novel follows Ellis through the intervening hours as the tension escalates with each new plot ingredient: a rebellious school friend; a chichi garden party; the host's disturbed son; beautiful sisters who live in a decaying inner-city motel; a kidnapping; unraveled family secrets; and a wild car chase ending in the rooftop rescue of a baby. In language both lush and unflinching, Mahy simultaneously develops both the exhilarating external action and Ellis' stumbling inner momentum as he confronts the new and learns to draw on his own resources. Readers may find some of the plot twists contrived (Ellis coaxes a suicidal teen off the roof with Shakespeare), but they will be drawn to the richly depicted characters' intelligent moxie, the rebellious struggle for self, the buffoonish adults, and the novel's breathless pace. Hip, literary suspense for older teens. --Gillian Engberg

(High School) Time has been a persistent Mahy theme; here she shows just what an accomplished writer can do with twenty-four hours. It's 5:10 p.m. Friday, the first chapter title announces, and seventeen-year-old Ellis, just home from prep school, yearns for wild adventure. A complication: Ellis, an aspiring actor, does not know how to deal with the recent suicide of a friend. The singularly talented Mahy has the clock strike the quarter hour: ""'Now!' that final fading stroke seemed to declaim. 'It begins now!'"" In total control of language, plot, character, and place, Mahy takes us on a roller-coaster ride that will define the next twenty-four hours for Ellis: ""Out of nowhere it seemed, a huge wind came funneling down the street""-beginning the unexpected, the chaotic, the out-of-control story that will encompass him. Each subsequent chapter advances the clock ahead, sometimes by as few as ten minutes or as long as several hours; once, Mahy, with characteristic inventiveness-and appropriateness-literally stops time. Her characters accumulate one by one on the frenzied scene. First, Mahy introduces the smart, original, and ""disreputable"" Jackie Cattle, who blows in on Rollerblades to manipulate conventional, privileged Ellis: Jackie needs Ellis's car to get to a party where Jackie's girlfriend Ursa is in residence with the hosts' unsavory son. Ursa and her sister Leona lead Ellis, bent on more adventure, to their home, the Land-of-Smiles Motel in a grungy section of town. In this surreal setting the cast expands to include another sister, Fox, with her fortune-telling ball of red glass; the sisters' guardian Monty, who lost his job with Social Welfare following his affair with a fifteen-year-old; baby Shelley, whose mother Mystique dumped her; and occasional visitors such as tattooist Phipps (with the words ""Drugs! Booze! Sex! march[ing] across his forehead"") and hairstylist Pandora with her scarred wrist. Weird sage Jackie describes everyone at home in the Land-of-Smiles as ""a bit-not mad, not bad-damaged,"" ""the fault of the world."" Hours later, staid Ellis has had his head shorn and sports a little skull tattoo-and has rescued a kidnapped baby. In less expert hands, the story's movement between deft picaresque character sketches and an over-the-top plot might appear laughable: here the commingling of the ordinary and the bizarre makes not only perfect sense but profound, poignant wisdom as well. Not since Memory has the brilliance of Mahy's literary gift found a better home than in this resilient tale of life, both mundane and far-out, winning out over death. s.p.b. (c) Copyright 2010. The Horn Book, Inc., a wholly owned subsidiary of Media Source, Inc. No redistribution permitted. All rights reserved.

Its 5:10 on a Friday afternoon and Ellis, 17, has just come home after graduating from prep school. Hes walking through the streets reacquainting himself with his hometown and dreaming about the adventures hell have at university the following year when he runs into an old acquaintance who is about to launch him into the strangest and most eventful 24 hours of his life. Jackie Cattle, a few years older and a shady character, convinces Ellis to drive him to a party in a wealthy suburb, and as they crash the party, Ellis wonders what Jackie is up to. Jackie, true to his character, causes trouble at the party and eventually they leave, now joined by Ursa, Jackies sometime-girlfriend, and Leona, Ursas sister. They all head back to a rundown motelthe Land-of-Smileswhere the two girls, Jackie, and several others, including a 12-year-old and a baby, live in an arrangement thats somewhere between a seedy commune and squatters digs. Ellis, the product of a conventional upbringing, has never seen anything like this living situation, and, while shocked and intrigued by the independence of its inhabitants, hes glad he has a solid middle-class home to return to. Somewhere along the way, in the space of a few hours, Ellis has fallen head over heels in love with Leona and become embroiled in the intrigues of the Land-of-Smiles. By Saturday night, a mere 24 hours later, Ellis has been dead drunk, has careened through the streets in a car chase, has rescued a baby who has been kidnapped, and has realized that Leona is not destined to be the love of his life. In other words, his desire for a life-changing adventure has been amply met. Mahy wonderfully captures the voice of an adolescent in the character of Ellis, managing somehow to make what could have been an awful story into a work of art. Beautifully written, this is a novel that pulls one into its orbit from the very first page. (Fiction. YA)
More book reviews at iDreamBooks.com