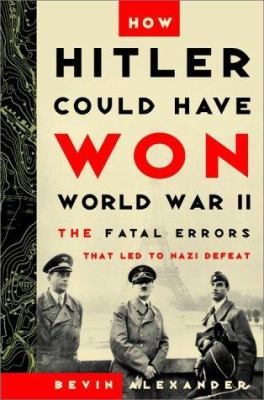 How Hitler could have won World War II : the fatal errors that led to Nazi defeat / Bevin Alexander.

Most of us rally around the glory of the Allies' victory over the Nazis in World War II. The story is often told of how the good fight was won by an astonishing array of manpower and stunning tactics. However, what is often overlooked is how the intersection between Adolf Hitler's influential personality and his military strategy was critical in causing Germany to lose the war. With an acute eye for detail and his use of clear prose, acclaimed military historian Bevin Alexander goes beyond counterfactual "What if?" history and explores for the first time just how close the Allies were to losing the war. Using beautifully detailed, newly designed maps, How Hitler Could Have Won World War II   exquisitely illustrates the  important battles and how certain key movements and mistakes by Germany were crucial in determining the war's outcome. Alexander's harrowing study shows how only minor tactical changes in Hitler's military approach could have changed the world we live in today. How Hitler Could Have Won World War II untangles some of the war's most confounding strategic questions, such as: Why didn't the Nazis concentrate their enormous military power on the only three beaches upon which the Allies could launch their attack into Europe? Why did the terrifying German panzers, on the brink of driving the British army into the sea in May 1940, halt their advance and allow the British to regroup and evacuate at Dunkirk? With the chance to cut off the Soviet lifeline of oil, and therefore any hope of Allied victory from the east, why did Hitler insist on dividing and weakening his army, which ultimately led to the horrible battle of Stalingrad? Ultimately, Alexander probes deeply into the crucial intersection between Hitler's psyche and military strategy and how his paranoia fatally overwhelmed his acute political shrewdness to answer the most terrifying question: Just how close were the Nazis to victory? Why did Hitler insist on terror bombing London in the late summer of 1940, when the German air force was on the verge of destroying all of the RAF sector stations, England's last defense? With the opportunity to drive the British out of Egypt and the Suez Canal and occupy all of the Middle East, therefore opening a Nazi door to the vast oil resources of the region, why did Hitler fail to move in just a few panzer divisions to handle such an easy but crucial maneuver? On the verge of a last monumental effort and concentration of German power to seize Moscow and end Stalin's grip over the Eastern front, why did the Nazis divert their strength to bring about the far less important surrender of Kiev, thereby destroying any chance of ever conquering the Soviets?

This study is another history of World War IIDbut with a new slant. Historian Alexander (Robert E. Lee's Civil War) argues that if Hitler had done things differently, he could have overrun the Middle East and acquired its oil, beaten the Allied forces to a standstill in Europe, and forced peace treaties that would have given him control of almost half the worldDand the opportunity to have a go at the rest. Asking "What if" is a popular pastime among historians, and this history offers the reader insights into the points in the conflict where the tide could have changed. The author has produced a well-written, concise history of the war against the Nazi military machine that emphasizes those campaigns the author uses to reinforce his point. Recommended for most history collections. [For a broader look at Hitler, see Ian Kershaw's Hitler, 1963-1945: Nemesis, reviewed on p. 90.DEd.]DMel D. Lane, Sacramento, CA (c) Copyright 2010. Library Journals LLC, a wholly owned subsidiary of Media Source, Inc. No redistribution permitted.

Hitler's skills at spotting an opponent's weaknesses brought him an uninterrupted string of victories from the fall of Weimar in 1933 to the fall of France in 1940. Afterwards, argues Alexander (Robert E. Lee's Civil War), he began believing his own press clippings. Invading Russia became a recipe for defeat when Hitler insisted on simultaneously persecuting a population he could have won over and pursuing offensives without regard for the operational situation. Above all, Alexander continues, Hitler failed to see that Germany's way to victory led not through Moscow but through Cairo. Even a fraction of the resources squandered in Russia would have enabled Germany to create a Middle Eastern empire that would have forced the U.S.S.R. to remain neutral, marginalized Britain and kept the U.S. from projecting enough power across the Atlantic to invade the continent against an intact Wehrmacht. This is an often-rehashed, often refuted position. German scholars like Andreas Hillgruber and Gerhard Schreiber have successfully and painstakingly demonstrated that the Mediterranean was a strategic dead end, despite its seeming operational possibilities. As a counterpoint to Hitler's shortcomings as a war leader, Alexander offers the usual Wehrmacht heroesDRommel, Manstein, Guderian. In praising their operational achievements, however, he omits discussion of the generals' consistent collaboration with their fhrer in military matters, or about the absence of significant dissent throughout the war. Instead, Alexander accepts the generals' long-discredited argument that had Hitler been willing to listen to those who understood the craft of war, things might have been different. This one-sided perspective significantly limits the book's value to both specialists and general readers. (Dec. 5) (c) Copyright PWxyz, LLC. All rights reserved

Alexander's 10 errors are hard to count exactly, but they may be summed up thus: between summer 1940 and fall 1941, Hitler threw away an overwhelming strategic superiority. He failed to eliminate the British when they were weakest and then launched a costly frontal attack on Russia. After 1942, the war was all downhill for Germany, and Alexander devotes the second half of the book to detailed discussions of campaigns of which alternate outcomes could only have lessened the magnitude of the German defeat, not led to German victory. Alexander's considerable warmth toward Rommel (to the point of hero worship) and, to a lesser extent, toward Patton may perplex many who hope to read more about Hitler, and still, this clear, well-researched book that draws on material from both sides of the Allied-Axis divide is by no means a bad introduction to the strategic analysis of World War II. --Roland Green

Creepy title aside, this is a crisp, effective WWII narrative, highlighting the many moments, invisible in the mechanized chaos of battle, where the worm might have turned against the free world. Decorated veteran Alexander (The Future of Warfare, not reviewed, etc.) emphasizes that he does not intend to ameliorate the magnitude of Hitlers crimes or provide a speculative history. Instead, he offers levelheaded dissent to the prevailing Greatest Generation view of Allied excellence, claiming that crucial points from 1940 onward could have been seized by the Nazi war machine had not the solipsistic perversities of Hitlers madness stymied each opportunity. He begins by depicting the multiple Nazi victories between Hitlers ascension in 1933 and the rapid conquest of France in 1940: Alexander posits (as did certain of Hitlers generals) that a series of surgical strikes in North Africa and the Middle East would have rendered the British military irrelevant and allowed the Nazis enough control over shipping and natural resources to establish rule over southwestern Europe and ultimately threaten the Soviet Union. Instead, Hitler focused all resources on an unsustainable frontal attack on Russia and on implementing genocide. Alexander examines shifting military fortunes in every stage of the war to explore how Hitlers obsessions undermined actual and potential achievements of the Wehrmacht. In Stalingrad, for example, the Führers strategically crude determination that all positions must be held led to the gruesome destruction of the German Sixth Army. One of his officers in the disastrous Russian campaign concluded that Hitler actually recoiled from risks in the military field, refusing to allow surrender of territory. Especially after the 1944 attempt on his life, this compulsion merged with his toxic grandiloquence to convince him that German forces were perpetually on the verge of decisive counterattacks. More generally, the leitmotif here seems to be Hitlers urge to destroy the German people alongside those for whom he professed hatred: as in his deliberate provocation of three great industrial powers to form an alliance against him. An engrossing military history, with chilling undertones of what might have been.
More book reviews at iDreamBooks.com