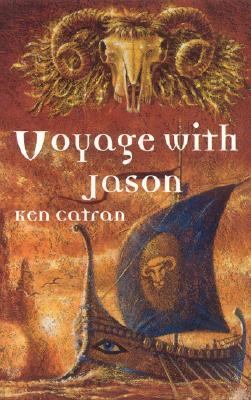 The story of Jason and his quest for the Golden Fleece remains a favorite with children. Ken Catran's version of the tale takes a slightly different tack from previous authors. Pylos, an apprentice shipbuilder, is rescued by Hercules from his cruel master and accompanies the Argonauts as the ship's boy and narrates the exciting events that happen during the three-year voyage: the sea battle with the Trojans, the harrowing passage through the clashing rocks, Jason's ill-fated romance with Medea, and the palace intrigue and royal rivalries that threaten to destroy the mission. Ken Catran's colorful characters, vivid dialogue, and dramatic narrative make this award winner a compulsively readable version of the classic myth.

Novel for young adults by a New Zealander ; A young apprentice ship's carpenter reveals a plot to sink the ship that Jason and the Argonauts will sail on to capture the golden fleece. His reward is to become ships' boy on the epic voyage, and eyewitness to the crew's many adventures during the legendary quest. Suggested level: secondary

Gr 5-8-Catran provides a new focus to the well-known story of Jason and the Argonauts, emphasizing the characters rather than the quest itself. Pylos, an apprentice shipbuilder, is rescued by Hercules from his cruel master, Thegus, and accompanies the Argonauts as the ship's boy. He narrates the events during this three-year quest: the long stay at Lemnos and the crew's hasty departure, the sea battle with the Trojans, and the harrowing passage through the clashing rocks. Upon their arrival at Colchis, a new and more dangerous challenge must be overcome in order to obtain the Golden Fleece. Jason and his men become embroiled in palace intrigue and the rivalry between the royal siblings, Medea and Apsyrtus. Vivid descriptions of the characters and their interaction with each other bring them to life. Readers can almost envision Medea and her Amazons in the battle with Apsyrtus. The superstitions, religion, and battles at sea are just some examples of the cultural elements woven into this fascinating, well-written story.-Lana Miles, Duchesne Academy, Houston, TX (c) Copyright 2010. Library Journals LLC, a wholly owned subsidiary of Media Source, Inc. No redistribution permitted.

Kiwi author Catran offers a melodramatic retelling of Jason's quest for the Golden Fleece, seen through the eyes of a cabin boy. Picked up by genial, if poorly socialized, Hercules, young Pylos is awed to be among the renowned heroes crewing the great ship Argos. Though squabbles, rivalries and arrogance cause much of that luster to fade in the course of the voyage, Pylos, the rough-humored crew and its clever, smiling captain Jason in general acquit themselves well in the crunch. They survive (with some casualties) the man-murdering women of Lemnos, Trojan ambush, huge Clashing Rocks, troops of Amazons, a writhing nest of deadly snakes guarding the glittering prize and finally the bloody downfall of the kingdom of Colchis. Though he replaces divine intervention with natural explanations, Catran otherwise sticks fairly closely to the standard version of the legend, adding a coda covering Jason's ill-starred history with Medea and his ironic death. This first U.S. edition of an award-winner will please fans of tales featuring manly men and courageous deeds. (Fiction. 11-13) Copyright ©Kirkus Reviews, used with permission.
More book reviews at iDreamBooks.com