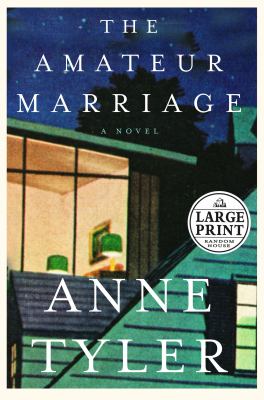 Genre/Form: Large type books. | Domestic fiction.DDC classification: Large Print Summary: When Pauline walked into his mother's store in the Polish neighborhood of Baltimore, Michael felt she was the one. Both young and good-looking - with the uncertainty and fervor of World War II only adding to their passion - Pauline and Michael seemed to be made for each other. Hastily married, the two soon after discovered just how mismatched they really are. Pauline's impulsive and impractical hit-or-miss approach to life is nothing like Michael's cautious and judgmental plodding-this, among other differences, causing them years of disagreement and painful arguing. When, years later, their 17-year-old daughter disappears, the estranged couple is left with no choice but to rescue their grandson Pagan from Haight-Ashbury and raise him themselves. Carefully wrought and brimming with wonderfully evocative details of time and place, THE AMATEUR MARRIAGE is an intelligently nuanced and sympathetic look at marriage, family, and human relationships in general.
Tags from this library: No tags from this library for this title. Log in to add tags.
Fiction notes: Click to open in new window

From the inimitable Anne Tyler, a rich and compelling novel about a mismatched marriage--and its consequences, spanning three generations.

They seemed like the perfect couple--young, good-looking, made for each other. The moment Pauline, a stranger to the Polish Eastern Avenue neighborhood of Baltimore (though she lived only twenty minutes away), walked into his mother's grocery store, Michael was smitten. And in the heat of World War II fervor, they are propelled into a hasty wedding. But they never should have married.

Pauline, impulsive, impractical, tumbles hit-or-miss through life; Michael, plodding, cautious, judgmental, proceeds deliberately. While other young marrieds, equally ignorant at the start, seemed to grow more seasoned, Pauline and Michael remain amateurs. In time their foolish quarrels take their toll. Even when they find themselves, almost thirty years later, loving, instant parents to a little grandson named Pagan, whom they rescue from Haight-Ashbury, they still cannot bridge their deep-rooted differences. Flighty Pauline clings to the notion that the rifts can always be patched. To the unyielding Michael, they become unbearable.

From the sound of the cash register in the old grocery to the counterculture jargon of the sixties, from the miniskirts to the multilayered apparel of later years, Anne Tyler captures the evocative nuances of everyday life during these decades with such telling precision that every page brings smiles of recognition. Throughout, as each of the competing voices bears witness, we are drawn ever more fully into the complex entanglements of family life in this wise, embracing, and deeply perceptive novel.


From the Hardcover edition.

When Pauline walked into his mother's store in the Polish neighborhood of Baltimore, Michael felt she was the one. Both young and good-looking - with the uncertainty and fervor of World War II only adding to their passion - Pauline and Michael seemed to be made for each other. Hastily married, the two soon after discovered just how mismatched they really are. Pauline's impulsive and impractical hit-or-miss approach to life is nothing like Michael's cautious and judgmental plodding-this, among other differences, causing them years of disagreement and painful arguing. When, years later, their 17-year-old daughter disappears, the estranged couple is left with no choice but to rescue their grandson Pagan from Haight-Ashbury and raise him themselves. Carefully wrought and brimming with wonderfully evocative details of time and place, THE AMATEUR MARRIAGE is an intelligently nuanced and sympathetic look at marriage, family, and human relationships in general.

Having wed too fast during World War II, the mismatched Pauline and Michael must put aside their differences to raise their grandson, neglected by his feckless teenaged mom in San Francisco. With a 300,000-copy first printing. (c) Copyright 2010. Library Journals LLC, a wholly owned subsidiary of Media Source, Inc. No redistribution permitted.

Because Tyler writes with scrupulous accuracy about muddled, unglamorous suburbanites, it is easy to underestimate her as a sort of Pyrex realist. Yes, Tyler intuitively understands the middle class's Norman Rockwell ideal, but she doesn't share it; rather, she has a masterful ability to make it bleed. Her latest novel delineates, in careful strokes, the 30-year marriage of Michael Anton and Pauline Barclay, and its dissolution. In December 1941 in St. Cassians, a mainly Eastern European conclave in Baltimore, 20-year-old Michael meets Pauline and is immediately smitten. They marry after Michael is discharged from the army, but their temperaments don't mix. For Michael, self-control is the greatest of virtues; for Pauline, expression is what makes us human. She is compulsively friendly, a bad hider of emotions, selfish in her generosity ("my homeless man") and generous in her selfishness. At Pauline's urging, the two move to the suburbs, where they raise three children, George, Karen and Lindy. Lindy runs away in 1960 and never comes back-although in 1968, Pauline and Michael retrieve Pagan, Lindy's three-year-old, from her San Francisco landlady while Lindy detoxes in a rehab community that her parents aren't allowed to enter. Michael and Pauline got married at a time when the common wisdom, expressed by Pauline's mother, was that "marriages were like fruit trees.... Those trees with different kinds of branches grafted onto the trunks. After a time, they meld, they grow together, and... if you tried to separate them you would cause a fatal wound." They live into an era in which the accumulated incompatibilities of marriage end, logically, in divorce. For Michael, who leaves Pauline on their 30th anniversary, divorce is redemption. For Pauline, the divorce is, at first, a tragedy; gradually, separation becomes a habit. A lesser novelist would take moral sides, using this story to make a didactic point. Tyler is much more concerned with the fine art of human survival in changing circumstances. The range and power of this novel should not only please Tyler's immense readership but also awaken us to the collective excellency of her career. (Jan.) Forecast: Expect the usual blockbuster sales-there will be a first printing of 300,000. This is also likely to become one of Tyler's strongest backlist titles. (c) Copyright PWxyz, LLC. All rights reserved

The attack on Pearl Harbor serves as the catalyst for Tyler's sixteenth novel by propelling Pauline, bleeding from a minor wound sustained in the fervor of a spontaneous patriotic parade, into the humble family grocery run by handsome and reserved young Michael and his embittered widow mother. An outsider to this tightly knit, Polish Catholic Baltimore neighborhood, Pauline is pretty, impulsive, and touchy, and although she and the far more deliberate and reticent Michael fall instantly in love, they are also immediately at odds. They marry precipitously, move into the cramped apartment above the store with his mother, rapidly produce three children, and consistently make each other miserable. Tyler's strength resides in her penetrating psychological portraits and delight in mundane details, and these gifts are evident in the novel's promising opening scenes. But the usually adept Tyler ends up setting 30 years of tedious marital unhappiness and domestic tragedy against a distressingly superficial and bland accounting of the rise of suburbia and the flowering of hippie culture. Her observations about how abruptly even the most boring life can go wrong, and about the fact that we are all amateurs in our first marriages, are poignant, however, and may be enough to satisfy readers who seek safe and comfy novels. --Donna Seaman Copyright 2003 Booklist

Painfully accurate and painfully funny as ever, Tyler's 16th novel (Back When We Were Grownups, 2001, etc.) traces the stormy union of two people who love but can't stand each other. Pauline bursts into Michael Anton's grocery store in December 1941, a bloody handkerchief pressed to the temple she wounded while impulsively jumping off a Baltimore streetcar to join an enlistment parade. In no time flat, she's persuaded Michael to join up, and they're married right after he's discharged. Three children arrive in short order, but it's not long before Michael is wondering, "Was it possible to dislike your own wife?" They're simply not good match: "Pauline tumbled through life helter-skelter while Michael proceeded deliberately . . . . Pauline believed that marriage was an interweaving of souls, while Michael viewed it as two people traveling side by side but separately." She sweeps him off to the suburbs and eventually gets him to move the family grocery store out there too; Michael always ends up doing what she wants while quietly resenting her moods, her enthusiasms, her recklessness. Pauline in turn is infuriated by "his rigidity, his caution, his literal-mindedness . . . his stodginess in bed, his magical ability to make her seem hysterical." Tyler beautifully delineates both spouses' perspectives throughout her episodic narrative, which drops in on the highlights of the Anton's 30-year marriage and the 20-year aftermath of their divorce. (A good technique, except for the terrible mistake of having the story's most vivid character die offstage.) Flashes of tenderness and genuine love serve to underscore the sad fact that they simply aren't suited, and cogent portraits of their children reveal the emotional damage they inflicted. Alive as always to life's messy ambiguities, Tyler declines to reach a final conclusion about this "amateur marriage," closing with a lovely image of Pauline's face lighting up with joy as her husband approaches--but it's just in Michael's imagination. So smart, so sensitive, so readable and engaging. Is it churlish to suggest that an author obviously at the peak of her powers should broaden her horizons and push herself a little harder the next time out? Copyright ©Kirkus Reviews, used with permission.
More book reviews at iDreamBooks.com