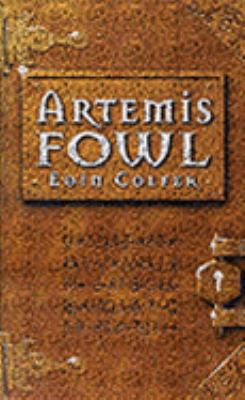 DDC classification: Young Adult Summary: 'Twelve year old Artemis Fowl is a brilliant criminal mastermind. But even Artemis doesn't know what he's taken on when he kidnaps a fairy..'--Back cover
Tags from this library: No tags from this library for this title. Log in to add tags.
Fiction notes: Click to open in new window

Twelve-year-old Artemis Fowl is a brilliant criminal mastermind. But even Artemis doesn't know what he's about to take on when he kidnaps a fairy - Captain Holly Short of the LEPrecon Unit. Artemis thinks he's got the fairies just where he wants them; but these fairies are armed and dangerous.

Followed by: Artemis Fowl and the Arctic incident.

'Twelve year old Artemis Fowl is a brilliant criminal mastermind. But even Artemis doesn't know what he's taken on when he kidnaps a fairy..'--Back cover

Colfer is already well known in Britain for his popular children's books. The quirky characters and delightful humor of his latest work will undoubtedly delight American readers as well. Artemis Fowl, 12-year-old criminal mastermind and consummate self-server, is out to win fame and restock the dwindling family fortune. The wealthy Fowls, underworld moguls, have fallen on hard times with the disappearance of Artemis's father and the questionable sanity of his depressed mother. Having discovered the true existence of fairies and their magic, Artemis foments a wicked plot to steal their gold. Coercing a fairy on the skids to show him her book of magic, he manages to crack the code and acquaint himself with fairy magic and technology. But Artemis realizes that he needs more bargaining power, so he kidnaps the fairy, Capt. Holly Short of the LEPrecon (Lower Elements Police Reconnaissance) Unit, intending to ransom her for the gold. As the book progresses, readers suspect that this child prodigy is perhaps not so foul as he seems, nor are the good fairies quite so wonderful after all. Fun to read, full of action and humor, this is recommended for all public libraries and to readers of all ages. [The publisher, jointly with Hyperion Books for Children, is promoting this to the young and adult fans of Harry Potter. Ed.] Jennifer Baker, Seattle P.L. (c) Copyright 2010. Library Journals LLC, a wholly owned subsidiary of Media Source, Inc. No redistribution permitted.

Colfer's (Benny and Omar) crime caper fantasy, the first in a series, starts off with a slam-bang premise: anti-hero Artemis Fowl is a boy-genius last in line of a legendary crime family teetering on the brink of destruction. With the assistance of his bodyguard, Butler, he masterminds his plan to regain the Fowls' former glory: capture a fairy and hold her ransom for the legendary fairy gold. However, his feisty mark, Holly, turns out to be a member of the "LEPrecon, an elite branch of the Lower Elements Police," so a wisecracking team of satyrs, trolls, dwarfs and fellow fairies set out to rescue her. Despite numerous clever gadgets and an innovative take on traditional fairy lore, the author falls short of the bar. The rapid-fire dialogue may work as a screenplay with the aid of visual effects (a film is due out from Talk/Miramax in 2002) but, on the page, it often falls flat. The narrative hops from character to character, so readers intrigued by Artemis's wily, autocratic personality have to kill a good deal of time with the relatively bland Holly and her cohorts, and the villain/hero anticlimactically achieves his final escape by popping some sleeping pills (it renders him invulnerable to the fairy time-stop). Technology buffs may appreciate the imaginative fairy-world inventions and action-lovers will get some kicks, but the series is no classic in the making. Ages 12-up. (May) (c) Copyright PWxyz, LLC. All rights reserved

Gr. 6^-8. Tell readers to suspend disbelief and read this wild and wacky story for the fun of it. Artemis Fowl is a 12-year-old genius and the scion of a legendary Irish criminal family whose fortune was diminished when Artemis Senior tried to horn in on the Russian Mafia. Determined to restore the family wealth, Artemis Fowl the Second concocts an elaborate plan to relieve the fairies of some of their magical gold by locating and tricking one of them into giving up the fairy's Book, which spells out the history and commandments that govern fairy life. Enter elf Holly Short, the first female officer in the underground LEPrecon (related to leprechaun, of course). Her assignment--to track a rogue troll on the loose in Italy--ends in disaster and leads to her being kidnapped by young Artemis and ransomed for a ton of small, unmarked, 24-karat gold ingots. The result is sheer mayhem, laced with high technology and magical goings-on. Characterizations and dialogue enhance a rollicking tale that will have readers rolling on the floor and eagerly anticipating the planned sequel as well as the movie in the works for 2002. --Sally Estes

(Intermediate, Middle School) Parker adopts a briskly sardonic voice for narrator Artemis Fowl, the twelve-year-old mastermind whose plotting against the fairy kingdom is as meticulous as it is nefarious. The cast of trolls, gnomes, and fairies invites free-wheeling interpretation: Captain Holly Short is brash and a bit breathless; Butler, Fowl's faithful servant, sounds a fair bit like Jeeves; and who's to say that a paranoid centaur doesn't speak with a cockney accent? Breakneck pacing keeps the convoluted plot moving with reckless indifference to anything but the drama of the moment--which is just as well since detailed explanations, extraordinary inventions, and incongruous tangents abound. Parker's performance is a perfect match for the fantasy's high-tech magic and low-brow humor. (c) Copyright 2010. The Horn Book, Inc., a wholly owned subsidiary of Media Source, Inc. No redistribution permitted. All rights reserved.

A 12-year-old Irish crime lord takes on the realm of Faerie to recoup his family fortune in this madcap leap aboard the Pottermania bandwagon. Having done his homework, thanks to a fairy manual extorted from an alcoholic sprite in Ho Chi Minh City, young Fowl and his omnicompetent butler, Butler, not only seize the equally aptly named Holly Short, feisty member of LEPrecon (an elite unit of the Lower Elements Police) for ransom, but are well prepared when her pointy-eared compatriots rush to the rescue with a combination of old magic and futuristic high technology. In the ensuing battle, fought as much with wits as weapons, Fowl proves himself a brilliant strategist, if not quite as dastardly or self-confident as hed like to be, and thanks to what amounts to a magical technicality, he comes out of the dustup alive, with a half-ton of fairy gold, and even a wish (which he puts to good use). Though the violence occasionally turns brutal, Fowl and Short make splendid, well-matched rivals, supported by an inspired cast that includes huge rogue trolls, malicious goblins, an irreverent techie satyr, and kleptomaniac dwarf Mulch Digginsall of whom are likely to reappear in sequels that are even now underway. Readers familiar with Sherlock Holmes, as well as an array of modern fantasists from Roald Dahl on, will find plenty of homage paid in this savagely funny page-turner. First printing of 100,000; $250,000 ad/promo; film rights to Miramax; author tour
More book reviews at iDreamBooks.com