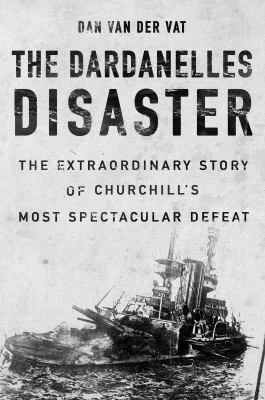 DDC classification: 940.426 VAN
Contents:
pt. 1. The fateful alliance -- The Turkish question -- The German answer -- pt. 2. The Allied response -- Blockade -- Councils of war -- 'We have no troops' -- pt. 3. Failure and after -- The Battle of the Dardanelles -- Crescendo -- Heads roll -- The Gallipoli campaign -- The inquest -- What became of them -- The new Turkey and Middle East -- Epilogue: The tale of two ships.
Summary: A naval historian describes the British Navy's disastrous attempt to get to Constantinople through the Dardanelles, and analyzes Winston Churchill's response to the obstacles faced during the operation that marked a turning point in World War I.
Tags from this library: No tags from this library for this title. Log in to add tags.
Fiction notes: Click to open in new window

Acclaimed naval military expert Dan van der Vat argues that the disaster at the Dardanelles prolonged the war by two years, led to the Russian Revolution, forced Britain to the brink of starvation, and contributed to the destabilization of the Middle East. With never before published information on Colonel Geehl's mine laying operation, which won the battle for the Germans, The Dardanelles Disaster is essential reading for everyone interested in great naval history, Churchill's early career, and World War I.

A naval historian describes the British Navy's disastrous attempt to get to Constantinople through the Dardanelles, and analyzes Winston Churchill's response to the obstacles faced during the operation that marked a turning point in World War I.

In 1915, the Royal Navy and Allied troops sought to open the Dardanelles strait, which the Ottoman Empire had closed to the Allies in 1914. The operation was overseen by First Lord of the Admiralty Winston Churchill, and it was a massive failure that devolved into the horrific Battle of Gallipoli. Van der Vat provides a dogged narrative, hewing very much to maneuver details, both in battle and in Whitehall offices, and then indicating how the World War I Turco-German alliance impacted not only that war's duration but the course of history to come. With no footnotes, van der Vat aims at general readers, but this is best for the strict military history enthusiasts among them.-Margaret Heilbrun, Library Journal (c) Copyright 2010. Library Journals LLC, a wholly owned subsidiary of Media Source, Inc. No redistribution permitted.

Winston Churchill as First Lord of the Admiralty is the central figure in naval historian van Der Vat's (The Ship that Changed the World) account of a disaster that prolonged the Great War by two years and laid the groundwork for the collapse of the czarist and Ottoman empires. The plan to take the Dardanelles strait was Churchillian in its conception: "the boldest strategic concept" of WWI, designed to simultaneously outflank a deadlocked Western Front and open a supply route to Russia. Its promise was thwarted by incompetent execution-beginning with Churchill's insistence on the navy forcing the Dardanelles alone, without ground troop support. The Royal Navy's predictable inability to push its battleships past the guns and minefields defending the Dardanelles forts in March 1915 followed the Allies' failure to intercept the German cruisers Goeben and Breslau before they reached Turkish waters and triggered the German-Ottoman alliance. An improvised land campaign undertaken with poorly trained troops whose senior commanders set unsurpassed standards of ineptitude ensued. General readers will find enlightening this extended demonstration of the contributions command can make to catastrophe. (July 14) (c) Copyright PWxyz, LLC. All rights reserved
More book reviews at iDreamBooks.com