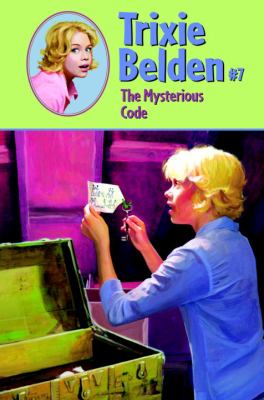 The mysterious code / by Kathryn Kenny ; illustrated by Paul Frame.

| Detective and mystery fiction -- Juvenile fiction.DDC classification: Children's Fiction
Production Credits: Cover illustration by Michael Koelsch.
Summary: While preparing for a fund-raiser antique show, Trixie and the other members of the Bob-Whites discover a secret code in the pages of an old magazine in the attic.
Tags from this library: No tags from this library for this title. Log in to add tags.
Fiction notes: Click to open in new window
No physical items for this record

Principal Stratton wants to get rid of all clubs in Sleepyside High School, including the Bob-Whites! The only way they can save their club is to prove that they help out other people, too. Trixie quickly comes up with a plan to host a benefit antique show and sale. But are the precious antiques in danger from thieves?

Previously published under the title: Trixie Belden and the mysterious code.

While preparing for a fund-raiser antique show, Trixie and the other members of the Bob-Whites discover a secret code in the pages of an old magazine in the attic.

<opt> <anon I1="BLANK" I2="BLANK">Diana, summoned from her big home high on a hill, was at the Manor House when Trixie arrived. They rushed up the stairs to the attic, climbed through the trap door to the cubbyhole, put the key and the mysterious tag on top of an old trunk, and started to explore. They looked under and around everything in the room: broken old ladders, discarded light fixtures, a three-legged hobby horse, storm windows, screens that needed repairing, discarded clothing packed in boxes. Trixie even rummaged through the boxes of clothing. They found an old chest filled with checkers and chess men, but the key with the strange figures didn't fit the keyhole. They did find some very old toys that had been put up high in the rafters. There was an old Punch and Judy theater with Punch, quite tattered and worn, leaning over the door holding his big stick. There was a Sleeping Beauty doll minus her long golden hair. There were three plaster figures of the seven dwarfs. "We can paint these and dress them in some new clothes," Honey said. "They'll be as good as new." "Let's stop hunting for anything that key fits," Diana said. "We could hunt from now until the Fourth of July and never find it. It's probably been thrown out long ago. Let's take some of these old St. Nicholas magazines over under the light and look at them!" Diana picked up two bound volumes of the magazine and carried them to the middle of the room. "My grandmother had some of them in her attic," Diana said. "Did you ever try to work any of the puzzles? Here, let's turn to the puzzle pages." The girls sat on the floor inside the cubbyhole, the bound magazines in their laps. "This one is way back in 1884," Diana said, opening the red cloth-bound book. "Heavens, that was before the United States was born," Trixie said. "Not quite," Honey laughed. "I thought you were better in history than math." "See if you can answer this one, if you're so smart," Trixie said, her face red. "It's an easy charade, or so it says." "Not any of the puzzles in St. Nicholas were easy," Diana said. "I guess people were smarter then." "Try this anyway," Trixie said. "Men hunt my first, then second my first in order to obtain my whole." "It must be something people hunt," Honey said. "Ducks . . . no; geese . . . no; rabbits . . . no; wolves . . . no. What is it, Trixie?" "I don't know myself. I'll have to look it up in the answers. They're given the month following. Let me see . . . it's sealskin! You hunt seal, don't you see, then skin the seal, and you have sealskin. Say, look at this other page, would you? Jumpin' Jupiter! It's the acrobats, the whole alphabet! Where's that tag?" Spread over a page in the old St. Nicholas magazine there was a group of dancing, tumbling little stick men, each posture representing a letter of the alphabet. "Let me see now," Trixie said. "Let's compare the tag. This is K; here is an E, and then Y. That first word is Key." Quickly Trixie spelled out the rest of the message on the tag. Transcribed, it read: Key to Riches. Trixie was so excited her hands were shaking. "It's a fortune!" she shouted. "I know it is. Come on!" She jumped up and let the book tumble to the floor. "Let's start hunting!" "We've covered every inch of this place," Diana said. "There isn't anything here that the key will fit. How do you know what we are hunting for is in the attic?" "It has to be," Trixie said. "Stand up here on this ladder," Honey said. "Reach up into the rafters, back of the Punch and Judy show. Isn't there something there?" Trixie reached, almost fell off the ladder, brought out an old broken pull toy. Her face fell. "There's not another thing here," she said and climbed down. Together the girls moved out all the old screens and storm windows, hunted over every inch of floor they had covered before, looked through the boxes of old clothes again till there was only one thing left, a chest that stood under the window in the closet next to the chimney. "We hunted through that before, Trixie," Diana said. "Let's hunt again," Honey cried, and she and Trixie drew out armload after armload of clothes long packed in moth balls. When she reached the bottom of the chest Trixie was so exasperated and disappointed she felt like crying. She slammed down the lid of the old chest and kicked it so hard it banged against the chimney, loosening several bricks that fell to the floor. "Jeepers, I'm sorry, Honey," Trixie said. "Your mother will think this is terrible." She picked up a brick, started to replace it in the chimney, then stopped. Her eyes grew as round as robins' eggs. "Will you look at this?" she asked Honey and Diana. They put their heads close to hers. Back of where the bricks had been there was an open space, and tucked cozily inside it was an old doll's trunk. Dazed, Trixie pulled it out, put it on the floor, inserted the key in the lock, turned it, and all three girls fell to their knees to look. Excerpted from The Mysterious Code by Kathryn Kenny All rights reserved by the original copyright owners. Excerpts are provided for display purposes only and may not be reproduced, reprinted or distributed without the written permission of the publisher.</anon> </opt>

Trixie fans will rejoice over these reissues of the seventh, eighth, and ninth titles in the long-out-of-print series, which use the original text and line drawings that place the books' action firmly in the late forties and early fifties. The plots are formulaic, but impulsive, good-hearted Trixie has an irresistible appeal. [Review covers these Trixie Belden titles: The Black Jacket Mystery, The Happy Valley Mystery, and The Mysterious Code.] (c) Copyright 2010. The Horn Book, Inc., a wholly owned subsidiary of Media Source, Inc. No redistribution permitted. All rights reserved.
More book reviews at iDreamBooks.com