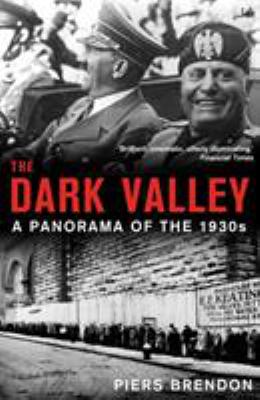 Piers Brendon's magisterial overview of the 1930s is the story of the dark, dishonest decade - child of one world war and parent of the next - that determined the course of the twentieth century.

Dealing individually with each of the period's great powers - the USA, Germany, Italy, France, Britain, Japan, Spain and Russia - Brendon takes us through the ten years dominated by the Great Depression and political turmoil. When Broadway, Piccadilly Circus, the Kurfurstendamm and the Ginza - neon metaphors of hope after four years of carnage - grew dim as the giants of unemployment, hardship, strife and fear took their hold. From the concentration camps of Dachau and Kolyma, the Ukraine famine and the American Dust Bowl, to the Moscow metro, the Empire State Building and the Paris Exposition, The Dark Valley brings the 1930's back to life through meticulous scholarship.

Brendon examines the great leaders - Hitler, Stalin, Mussolini, Mao Tse-Tung, Haile Selassie and countless others - not with hindsight but in the context of their age; but also, through a vivid chronicling of contemporary experience, he gives us a sense of what it was to be living then.

Relying on a wide variety of secondary sources, Brendon (Churchill Archives and Churchill Coll., Cambridge) surveys the domestic and international scenes in Britain, France, the United States, Japan, and the Soviet Union during the tumultuous 1930s. Although primarily a narrative, the book presents useful analytical insights into the causes and consequences of governmental policy in both dictatorships and democracies. Brendon advances no radical reworking of the historiography, but he offers useful perspectives into Fascist Italy and Nazi Germany. His chapters on the United States and Great Britain give readers insight into the rise of totalitarianism and the maintenance of democracy during crisis. One of the book's main strengths is in demonstrating the interdependence of international events throughout the decade. Although the author focuses primarily on political and economic issues, he gives some analysis of everyday life. This well-written book is recommended for most libraries.DFrederic Krome, Jacob Rader Marcus Ctr. of the American Jewish Archives, Cincinnati (c) Copyright 2010. Library Journals LLC, a wholly owned subsidiary of Media Source, Inc. No redistribution permitted.

Brendon's latest book is ambitious, covering the world's convulsive descent from the economic and political chaos of the 1930s into the global slaughter of the war-torn 1940s. Taking his title from Churchill's address to Stalin on May 8, 1945, Brendon (Hurrell Froude and the Oxford Movement; etc.) analyzes the decade from the start of the Depression to the eve of WWII, a period of economic collapse in the democracies and aggressive totalitarianism in the nations that would ultimately form the Axis. Brendon traces how each of seven nations (the U.S., Britain, France, Spain, Italy, Russia and Japan) responded to the era's economic upheavals. In Germany, Italy and Japan the answer to the Depression was massive rearmament, to which the democracies responded, as Brendon details, with temporizing and appeasement. Brendon is especially interested in mechanisms for distorting the truth, including propaganda and censorship. His writing is superlative, his vocabulary precise and extensive; he displays remarkable talent for the revealing phrase and the polished anecdote. Each of the decade's personalities, from Hoover to Orwell, from Haile Selassie to Harry Hopkins, is pinned down in a trenchant sketch, and the dominant characters, such as Roosevelt, Mussolini and Hitler, are examined carefully. Most important, Brendon demonstrates why one cannot understand the appalling violence of the Second World War without first mastering the tumultuous decade in which the seeds of the war were planted. 24 pages of photos not seen by PW. Agent, Andrew Best. 50,000 first printing. (Oct) (c) Copyright PWxyz, LLC. All rights reserved

This chronological narrative focuses on how the US, Germany, Italy, France, Britain, Japan, and the USSR experienced the throes of the Great Depression, the "Dark Valley." The topographical metaphor is sustained throughout the volume's five parts: "Approach" (three chapters set the scene from WW I to the Wall Street Crash of 1929); "Into the Abyss" (11 chapters examine the several national experiences of these times); "Canyon" (two chapters address the Spanish Civil War as "the defining episode of the 1930s"); "Deepening Gloom" (10 chapters recount the national political landscapes as they encounter totalitarianism and militarism); and, finally, "Chasm" (the "terminal point of the dark valley of Depression," WW II). Dozens of dramatis personae stud a narrative that is underpinned by anecdote, fine social detail, and ambience of place and time. Brendon also covers various strategies of the "dissemination of falsehood" employed by communists, fascists, national-socialists, and imperialists alike in their preoccupation with monumentalism, public spectacle, and mass communications. As Brendon puts it, it was a period when "political power obscured knowledge, and economic catastrophe darkened understanding." Well written, well illustrated, and well referenced, this volume is as rich and nuanced as it is thick. All collections. B. Osborne; Queen's University at Kingston

With the benefit of six decades of hindsight, the 1930s seem to have been dominated by almost criminal blindness. How could most Western statesmen be so blind to the dangers of fascism? How could so many "useful idiots" on the left ignore the increasingly obvious nightmare of Stalin? How could members of the Catholic Church hierarchy, including Pope Pius XI, believe that Mussolini would "regenerate" Italy? This brilliant and utterly fascinating study valiantly re-creates the hopes, fears, and hatreds in the U.S., the major European powers, and Japan. Brendon, a fellow of Churchill College, Cambridge, masterfully reveals the tensions brought on by intolerable contradictions in each nation, such as glittering urban cultural showcases surrounded by the almost unbearable squalor of the Great Depression and political leaders mouthing platitudes about freedom while using brutal repression against internal opposition. All the while, the specter of World War I's unprecedented slaughter constantly haunted leaders and the general population. This book is an essential contribution to the understanding of the horrors of World War II and its legacy. --Jay Freeman

A majestic and highly readable history of the most distressing of decades. Cambridge historian Brendon (Eminent Edwardians, not reviewed) finds the 1930s depressing, viewing them largely as a long and winding slide into the abyss of WWII. Luckily his prose is sharp and clever enough to propel the reader happily through all of the impending doom and gloom. Alternating among the seven nations that would constitute the primary combatants (England, France, Germany, Italy, Japan, the Soviet Union, and the US), he argues, fairly convincingly, that the use of propaganda and spectacle was the hallmark of the decade in all of them. Certainly none of the theses presented here are daring or new, and Brendon rarely departs from the standard schoolboy's idea of the decade's progression. But the scope and organization of the story he tells are pulled off masterfully, and the sketches of impossibly well-known figures such as Churchill, Stalin, and Mussolini are intriguing, even strangely humanizing. At times the narrative threatens to bog down into a series of lists: French governments, New Deal initiatives, purged Bolsheviks, Nazi demands, Japanese plots, English witticisms. And names and events likely to be unfamiliar to those educated on this side of the Atlantic are dropped without explanation. What is more, there are glaring omissions--apparently nothing happened in the British Empire outside of London during the whole decade, while China and Africa make appearances only when they are invaded. These are minor, and perhaps inevitable, complaints, however, given the admittedly panoramic aims of the project. The comprehensiveness and thoughtfulness of its execution are more than ample recompense. Compelling and propelled by a gathering momentum, this all but begs for a sequel. Copyright ©Kirkus Reviews, used with permission.
More book reviews at iDreamBooks.com