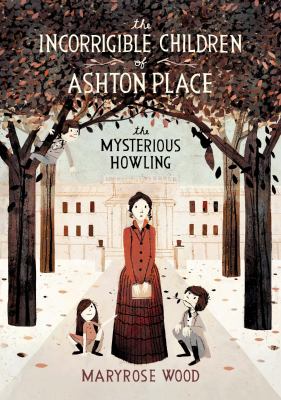 The mysterious howling / by Maryrose Wood ; illustrated by Jon Klassen.

Found running wild in the forest of Ashton Place, the Incorrigibles are no ordinary children: Alexander, age ten or thereabouts, keeps his siblings in line with gentle nips; Cassiopeia, perhaps four or five, has a bark that is (usually) worse than her bite; and Beowulf, age somewhere-in-the-middle, is alarmingly adept at chasing squirrels.

Luckily, Miss Penelope Lumley is no ordinary governess. Only fifteen years old and a recent graduate of the Swanburne Academy for Poor Bright Females, Penelope embraces the challenge of her new position. Though she is eager to instruct the children in Latin verbs and the proper use of globes, first she must help them overcome their canine tendencies.

But mysteries abound at Ashton Place: Who are these three wild creatures, and how did they come to live in the vast forests of the estate? Why does Old Timothy, the coachman, lurk around every corner? Will Penelope be able to teach the Incorrigibles table manners and socially useful phrases in time for Lady Constance's holiday ball? And what on earth is a schottische?

Fifteen-year-old Miss Penelope Lumley, a recent graduate of the Swanburne Academy for Poor Bright Females, is hired as governess to three young children who have been raised by wolves and must teach them to behave in a civilized manner quickly, in preparation for a Christmas ball.

Followed by: The hidden gallery.

In this humorous kickoff to the Incorrigible Children of Ashton Place series, Wood (My Life: The Musical) injects new life into the governess theme by charging genteel 15-year-old Penelope Lumley (educated at the Swanburne Academy for Poor Bright Females) with three wild children-Alexander, Beowulf, and Cassiopeia-who were raised in the woods and taken into the "care" of Lord Frederic Ashton and his selfish, superficial bride (the children are living in a barn when Penelope arrives). With a Snicketesque affect, Wood's narrative propels the drama; Penelope is a standout, often invoking the truisms of her school's founder ("The best way to find out how fast a horse can run is to smack it on the rump") while caring for the Incorrigibles-named such so they won't be presumed Ashton's heirs. Despite the slapstick situations involving the children's disheveled appearance, pack behavior, and lack of language, the real barbarism comes from the Ashtons and a society that eagerly anticipates their failure. Though the novel ends a bit abruptly, the pervasive humor and unanswered questions should have readers begging for more. Final art not seen by PW. Ages 8-12. (Feb.) (c) Copyright PWxyz, LLC. All rights reserved

Gr 5-8-Jane Eyre meets Lemony Snicket in this smart, surprising satire of a 19th-century English governess story. A witty omniscient narrator speaks directly to modern readers and follows 15-year-old Penelope, recent graduate of the Swanburne Academy for Poor Bright Females, to British country manor Ashton Place, where conniving Lord Fredrick has discovered three wild children apparently raised by wolves while hunting in his vast forest property. To Lord Fredrick, who's named them Alexander, Beowulf, and Cassiopeia Incorrigible, the children are trophies and property ("Finder's keepers, what?"); to young Lady Constance they're savage nuisances who howl, chase squirrels, and gnaw on shoes. Enter Penelope Lumley, charged with taming them in time for a Christmas party, and bolstered by her top-notch classical education and an endless supply of platitudes from Agatha Swanburne. She also comes armed with a cherished book of poetry and her favorite fiction series, "Giddy-Yap, Rainbow!" There are stock characters, and there are mysteries. Most of all, without taking itself too seriously, there is commentary on writing itself, the dangers and the benefits of relying on books for moral courage, and the perils of drawing false expectations of the world from literature. Penelope shows growth, confronting issues of social class and expectation versus reality, and eventually realizing her own capacity for insight. Humorous antics and a climactic cliff-hanger ending will keep children turning pages and clamoring for the next volume, while more sophisticated readers will take away much more. Frequent plate-sized illustrations add wit and period flair.-Riva Pollard, Prospect Sierra Middle School, El Cerrito, CA (c) Copyright 2010. Library Journals LLC, a wholly owned subsidiary of Media Source, Inc. No redistribution permitted.

*Starred Review* Three unfortunate orphans. A series of unexplained events. A droll offstage narrator. Is any of this starting to sound familiar? Well, yes and no. Although Lemony Snicket's illustrious crew does come to mind right from the start of this book, there are differences. For instance, these children were raised by wolves. Moreover, they're not even the protagonists of the Incorrigible Children of Ashton Place series. That pride of place goes to Miss Penelope Lumley, their 15-year-old governess, recently graduated from the Swanburne Academy for Poor Bright Females. Penny, who understands commitment, takes in stride her first introduction to her charges, with their near-naked bodies, matted hair, and indecipherable growling. Soon she has them listening to poetry and playing about with Latin, but things are not well at Ashton Place. How Lord Fredrick came upon these children is unclear; who wants them out of Ashton Place means danger; and whether there's someone living behind the staircase wall is perplexing. Then there are the questions about Penny herself. It would have been lovely if all or any of this was cleared up. It's not, so the book serves as more of an appetizer than a main course. But how hearty and delicious it is. Smartly written with a middle-grade audience in mind, this is both fun and funny and sprinkled with dollops of wisdom (thank you, Agatha Swanburne). How will it all turn out? Appetites whetted.--Cooper, Ilene Copyright 2010 Booklist

In this fresh take on older-than-old conventions, Miss Penelope Lumley, an orphaned young lady with high standards and a cheerful disposition, accepts a position as governess to three uncivilized (understandably, as they've been raised by wolves) children on a full-of-secrets country estate. Let the over-the-top characterizations, ludicrous situations, and tongue-in-cheek humor begin! "Penelope tried to assume the same firm, gentle tone Miss Mortimer had always used to good effect on the girls at Swanburne...'Abandoned in the forest as infants, suckled by ferocious smelly animals, forced to wear uncomfortable party outfits, and made to learn to dance the schottische -- this is simply the way life goes. Hands must be washed before dinner nevertheless. Please and thank you must be said, and playthings must be put away when you are done with them. Are we agreed?'" This first installment is practically all setup, settling Penelope in at Ashton Place with Alexander, Beowulf, and Cassiopeia and introducing various mysteries (why did the hunting-obsessed Lord Fredrick rescue the children from the woods in the first place? What is that mysterious howling behind the attic door? Why are Penelope and Cassiopeia's hair the exact same shade?). Comparisons to Lemony Snicket's Series of Unfortunate Events are inevitable and deserved, as both authors have the gift of simultaneously sending up and inhabiting the story they are telling. Froth, nicely sustained. From HORN BOOK, (c) Copyright 2010. The Horn Book, Inc., a wholly owned subsidiary of Media Source, Inc. No redistribution permitted.

Fresh from the Swanburne Academy for Poor Bright Females, 15-year-old Penelope Lumley reports to remote but palatial Ashton Place and discovers just why the advertisement for a governess indicated a strong preference for "Experience with Animals." The three young children are not the offspring of disdainful newlywed Lady Ashton but were recently found in the forest, raised (apparently) by wolves. Lacking magical props but in every other respect a Mary Poppins in the bud, Miss Lumley quickly gets the wild but winning trio out of the barn and into the nursery, washed, properly dressed andthanks to a savvy strategy of "careful demonstration, a great deal of repetition, and the occasional use of tasty treats"on the road to civilized behavior. Tongue so forcibly in cheek that medical intervention may be required, Wood plunges her inexperienced but resourceful heroine into an unusually challenging domestic situation, winds the plot up and closes with an aftermath laced with tantalizing hints that All Is Not As It Seems. It's the best beginning since The Bad Beginning (1999) and will leave readers howling for the next episode. (High melodrama. 10-12) Copyright Kirkus Reviews, used with permission.
More book reviews at iDreamBooks.com