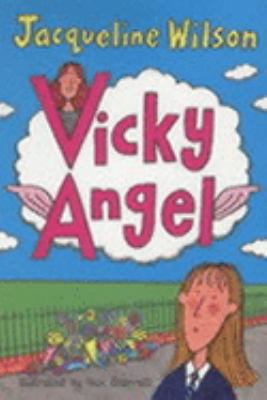 Genre/Form: Ghost stories.DDC classification: Children's Fiction Summary: Jade is so used to being with and agreeing with Vicky, her larger than life best friend, that when a tragic accident occurs, she can hardly believe that Vicky is dead. Whether Jade is in lessons, out running or tentatively trying to make new friends, Vicky's presence haunts Jade as she struggles to come to terms with her death. Suggested level: intermediate, junior secondary.
Tags from this library: No tags from this library for this title. Log in to add tags.
No physical items for this record

Jade is so used to being with and agreeing with Vicky, her larger than life best friend, that when a tragic accident occurs, she can hardly believe that Vicky is dead. Whether Jade is in lessons, out running or tentatively trying to make new friends, Vicky's presence haunts Jade as she struggles to come to terms with her death. Suggested level: intermediate, junior secondary.

Wilson (The Story of Tracy Beaker, reviewed July 23) here poignantly addresses a tragic and traumatic experience: the death of a friend. Narrator Jude and her friend Vicky are inseparable ("We're going to be best friends for ever and ever and ever, through school, through college, through work"), until one afternoon, when Vicky is hit by a car. But the separation is temporary: after learning at the hospital that Vicky has died, Jude returns to the site of the accident, where she discovers a bouquet of red roses ("It's as if any spilt blood has been magically morphed into sweet-smelling flowers")Aas well as Vicky. Guilt-filled (at one point Vicky's mother asks Jude, "Couldn't you have stopped her?"), the grieving girl finds solace in visits from Vicky's ghost. Yet Wilson adds intriguing dimension to her plot, as the apparition intermittently comforts and taunts Jude, sometimes making her laugh and at other times encouraging her to be mean to classmates who try to comfort her. Other characters, too, seem to make light of the events (e.g., Jude's mother wishes to contribute flowers and, upon learning that white lilies were Vicky's favorites, says, "They'll cost a fortuneAbut it can't be helped, I suppose"). Despite the well-intentioned efforts of teachers and friends, Vicky increasingly becomes a controlling presence from which Jude feels unable to escape. Yet ultimately, the friends do let go, as Jude's narrative reaches an affirming, affecting conclusion. Ages 8-12. (Sept.) (c) Copyright PWxyz, LLC. All rights reserved

Gr 6-8-Jade and Vicky are as close as sisters and have been friends since nursery school. However, while Vicky is outgoing and bubbly, Jade is quiet, and definitely the follower in the relationship. As the teens are leaving school one day, they have an argument. Vicky flounces off in a huff, crossing the street without looking. She is hit by a car and dies in the hospital. Remorseful, Jade returns to the spot where the accident happened. She encounters Vicky, now a ghost, who over the next several months takes to tormenting Jade, getting in the way of homework and new friendships. A teacher suggests that the young woman might benefit from grief counseling. In the final pages, when she gives evidence at the inquest, Jade, who has felt responsible for the death, allows herself to remember the events leading up to the accident. This is a well-written book by a popular British author, but somehow it just doesn't work: the ending is facile, as is the implication that her sudden recollection of what happened makes her "OK." Also, the idea that she would see a grief counselor without her parents' approval is interesting, but Mrs. Wainwright seems a little too good to be true, and the relationship and trust between the two develop too quickly. Still, the book may prove popular with reluctant readers who enjoy novels that portray teen angst.-Marlyn K. Roberts, Torrance Public Library, CA (c) Copyright 2010. Library Journals LLC, a wholly owned subsidiary of Media Source, Inc. No redistribution permitted.

Gr. 4-7. Wilson, who does such a great job of taking serious topics and leavening them with humor, takes on a rough assignment here--death and its aftermath. There are a few overwrought moments, but she succeeds at explaining survivor guilt to her young audience. Jade and Vicky have been best friends forever, with Vicky the dominant one and Jade her willing lackey. All that changes with the squeal of car brakes: Jade and Vicky are having a tiff when Vicky darts out into the street and is killed. Jade copes by conjuring up an imaginary Vicky, though readers will believe, as Jade does, this Vicky is quite real. Certainly, Vicky acts as she did in life, amusing Jade, comforting her, tormenting her, preventing her from befriending anyone else. Wilson gets inside Jade's head--where Vicky is firmly lodged--and readers experience all of Jade's conflicting emotions as she weakly fights against Vicky's influence and her own desire, at times, to join her friend in death. Wilson's wonderful way with dialogue, and the British sensibility that pervades the story, makes this more incisive than depressing. Jade's eventual decision to fight her obsession comes a bit quickly, but her ability to finally relive the accident and assess her guilt makes for a dramatic, heartening conclusion. Ilene Cooper

After witnessing her best friendÆs death in a car accident, Jade finds it hard to make new friends, especially since VickyÆs ghost comes back and jealously prevents her from trying. Class clown Fatboy Sam and JadeÆs teachers reach out to help. Set in England (with British-flavored language), this ghost story can be read lightly, yet it grapples with serious issues of grieving and moving on. From HORN BOOK Spring 2002, (c) Copyright 2010. The Horn Book, Inc., a wholly owned subsidiary of Media Source, Inc. No redistribution permitted.

Jade and Vicky are best friends, "closer than sisters," and although the cover openly reveals Vicky's death, it does not prepare readers for Jade's intense reactions. Immediately Vicky dies, and Jade begins to see and hear her spirit. But this story is not the typical: friend dies and appears as gentle ghost, protagonist grieves and heals, and friend's ghost quietly disappears. At first ecstatic to be reunited with Vicky, Jade quickly becomes tormented by her, a girl who, readers discover, often manipulated their friendship. Vicky's spirit demands Jade's loyalty; forces her to talk cruelly to those trying to help her; makes her laugh at inappropriate times; pinches and prods her, causing her to fidget incessantly; and constantly reminds Jade of her death, even insinuating Jade's culpability. With marital problems of their own, Jade's parents cannot comfort her, but a loving teacher introduces the girl to a grief counselor. Through counseling, Jade confronts and learns to control Vicky, taking charge of her grieving. In addition to this theme, Wilson (The Story of Tracy Beaker, p. 873, etc.) tackles myriad responses to Vicky's death from her mother's anger to all-out hysteria. What makes this story successful are its honest characters and dialogue, its unique coverage of grief, and its ability to unite readers with Jade's healing process. (Fiction. 9-12)
More book reviews at iDreamBooks.com