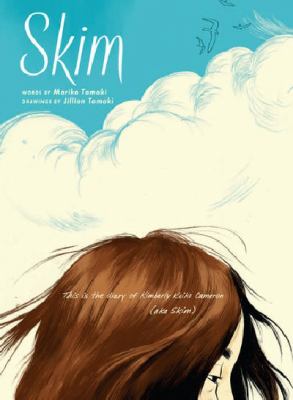 DDC classification: Young Adult Subject: After a boy at school takes his own life, teen-witch Skim's fragile world seems to topple and turn upside down too. In witty, moving and painfully honest diary entries, Skim confides the frenzy of grief that surrounds her, while deep down she struggles with her own loneliness and the secret inner stirrings she feels when falling in love for the first time.
Fiction notes: Click to open in new window
No physical items for this record

After a boy at school takes his own life, teen-witch Skim's fragile world seems to topple and turn upside down too. In witty, moving and painfully honest diary entries Skim confides the frenzy of grief that surrounds her, while deep down she struggles with her own loneliness.

After a boy at school takes his own life, teen-witch Skim's fragile world seems to topple and turn upside down too. In witty, moving and painfully honest diary entries, Skim confides the frenzy of grief that surrounds her, while deep down she struggles with her own loneliness and the secret inner stirrings she feels when falling in love for the first time.

<opt> <anon I1="BLANK" I2="BLANK">Dear Diary,Today Lisa said, "Everyone thinks they are unique." That is not unique!! Excerpted from Skim by Mariko Tamaki All rights reserved by the original copyright owners. Excerpts are provided for display purposes only and may not be reproduced, reprinted or distributed without the written permission of the publisher.</anon> </opt>

This auspicious graphic novel debut by cousins Mariko and Jillian Tamaki tells the story of "Skim," aka Kimberly Keiko Cameron, a goth girl in an all-girls school in Toronto, circa the early '90s. Skim is an articulate, angsty teenager, the classic outsider yearning for some form of acceptance. She begins a fanciful romance with her English teacher, Ms. Archer, while nursing her best friend through a period of mourning. The particulars of the story may not be its strong suit, though. It's Jillian's artwork that sets it apart from the coming-of-age pack. Jillian has a swooping, gorgeous pen line-expressive, vibrant and precise all at once. Her renderings of Skim and her friends, Skim alone or just the teenage environment in which the story is steeped are evocative and wondrous. Like Craig Thompson's Blankets, the inky art lifts the story into a more poetic, elegiac realm. It complements Mariko's fine ear for dialogue and the incidentals and events of adolescent life. Skim is an unusually strong graphic novel-rich in visuals and observations, and rewarding of repeated readings. (Feb.) (c) Copyright PWxyz, LLC. All rights reserved

Gr 10 Up-Kimberly Keiko Cameron-aka "Skim"-is a mixed-race high school student struggling with identity, friendships, and romantic yearning. After her parents' divorce, she turns to tarot cards and Wicca to make sense of life but finds herself disappointed with the lack of answers they provide. She finds herself increasingly intrigued by Ms. Archer, her free-spirited English teacher. Her interest becomes obsessive and it begins to drive a wedge between her and her best friend, Lisa. Although Skim originally makes light of the half-hearted suicide attempts of popular Katie, whose ex-boyfriend committed suicide, the two of them begin to open up to one another. Skim soon realizes that "perfect" Katie is far funnier, more genuine, and more traumatized than she originally thought-particularly when it comes to light that John shot himself due to his homosexuality. Drawn in an expressive, fluid style and with realistic dialogue, this work accurately depicts the confusion of teenage years, with its rejection of previous identity and past relationships and search for a newer and truer identity; additionally, insider/outsider status is a reoccurring theme. Skim's internal monologue is diarylike, with an interesting use of "scratched-out" words. This is a good but somewhat standard work.-Dave Inabnitt, Brooklyn Public Library, NY (c) Copyright 2010. Library Journals LLC, a wholly owned subsidiary of Media Source, Inc. No redistribution permitted.

Canadian essayist and adult-books author Tamaki and her cousin, an artist, dive into the graphic format by using high school as a fertile setting for pungent commentary on racial, cultural, and sexual issues. Pudgy Asian American Skim suffers the contempt of the popular crowd at her all-girl school and ponders the repercussions of the recent suicide of a local boy. The source of her greatest anguish, however, is her intense love for her drama teacher, Ms. Archer, an affection only briefly requited before the teacher leaves without explanation. The narrative, mainly in diary form, feels accurate and realistic, drenched in a sense of confusion and nihilism, and the art, influenced by Craig Thompson's Blankets (2003), reflects the spare, gloomy emotional landscape in which Skim exists. This story will appeal to many female comics fans, though readers may, in the end, be slightly turned off by a resolution that awkwardly introduces some odd sunlight into the otherwise dark world.--Karp, Jesse Copyright 2008 Booklist

(High School) This stunningly emotional graphic novel charts a season of change in the life of Kim (nicknamed Skim "because I'm not"), a thoughtful, brooding misfit facing questions of life, death, friendship, and identity. Kim's sole friendship gradually crumbles; her surreal smoking breaks with Ms. Archer, the young, dramatic English teacher, evolve into unsettling romance; and a suicide rocks the all-girls school she attends. The narrative also touches, though doesn't dwell, on Kim's exploration of Wiccan spirituality and the issues she faces as a biracial teen and a child of divorced parents. These many threads connect and diverge in equal measure, coexisting in an artful jumble that is as true-to-life as it is diffuse. The free-flowing combination of dialogue, internal narration, and diary entries is unfussy and immediate, and the delicately lined art alternately expands and contradicts the prose to achieve layers of meaning, tone, and irony. Dark space and perspective are used to great effect, grafting emotion onto every scene, and the simplest details of body language -- Kim's creased brow and hunched shoulders; Ms. Archer's serene, vaguely secretive countenance; a new, wounded friend's pinched mouth and suspicious eyes -- project fully developed personalities. With honesty and compassion, this innovative narrative communicates a life just beginning, open and full of possibility. From HORN BOOK, (c) Copyright 2010. The Horn Book, Inc., a wholly owned subsidiary of Media Source, Inc. No redistribution permitted.
More book reviews at iDreamBooks.com