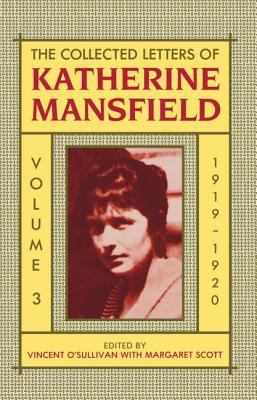 The third volume of the Collected Letters of Katherine Mansfield covers the eight months she spent in Italy and the South of France between the English summers of 1919 and 1920. It was a time of intense personal reassessment and distress. Mansfield's relationship with her husband JohnMiddleton Murry was bitterly tested, and most of the letters in this present volume chart that rich and enduring partner'ship through its severest trial. This was a time, too, when Mansfield came to terms with the closing off of possibilities that her illness entailed. Without flamboyance or fuss,she felt it necessary to discard earlier loyalties and even friendships, as she sought for a spiritual standpoint that might turn her illness to less negative ends. As she put it, 'One must be ... continually giving and receiving, and shedding and renewing, and examining and trying to place'.For all the grimness of this period of her life, Mansfield's letters still offer the joie de vivre and wit, self-perception and lively frankness that make her correspondence such rewarding reading - an invaluable record of a `modern' woman and her time.

Katherine Mansfield was a New Zealander.