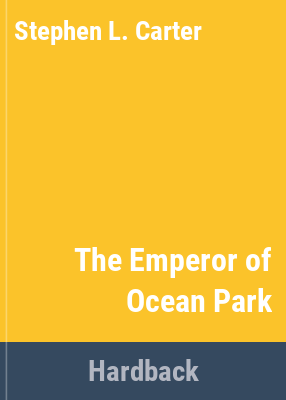 The emperor of Ocean Park

Judge Oliver Garland has just died in suspicious circumstances. Conservative and famously controversial, Garland has made many enemies. Many years ago, he'd earned a judge's highest prize: a Supreme Court nomination. This is a work of fiction, a crafted tapestry of ambition, family secrets, murder, and justice gone terribly wrong.

A Yale law professor and author of seven nonfiction books of legal and political philosophy, Carter (The Culture of Disbelief, etc.) here turns his hand to fiction. When Judge Garland dies, his son Talcott tries to piece together his father's secret life and make sense of "the arrangements," his father's mysterious final requests. At least that's what Tal thinks he's doing. Suddenly, this law professor a failure at marriage and distracted father finds himself caught in an invisible net of vague clues about the judge's arrangements, delivered in hushed voices by a bewildering cast of extended family, so-called friends, Mafia "uncles," and thugs disguised as FBI agents. Carter moves the unwitting professor inch by painful inch toward truth and psychological disintegration as he learns about his father's corruption and also loses his wife. Suspense falls flat, however, as the author delivers description for action and philosophy rather than plot. The book is overlong and reads more like a composite view of Carter's ideology than the legal thriller it could have been. Those who enjoy a leisurely pace to their suspense and subscribe to Carter's philosophy of conservatism will enjoy it. The rest will stick with Grisham, Martini, and Margolin. Purchase for anticipated demand. [Previewed in Prepub Alert, LJ 2/15/02.] Jennifer Baker, Seattle P.L. (c) Copyright 2010. Library Journals LLC, a wholly owned subsidiary of Media Source, Inc. No redistribution permitted.

Carter, a Yale law professor and distinguished conservative African-American intellectual known for his nonfiction (The Culture of Disbelief), has written a first-rate legal thriller guaranteed to broaden his audience. The narrator, Talcott Garland, is a law professor at Elm Harbor University whose occasional Carteresque editorializing about politics and justice are saved from didacticism by his abiding existential loneliness. The mystery at the heart of the novel stems from Tal's father's disgrace: Judge Oliver Garland (a Robert Bork meets Clarence Thomas type) was nominated by Ronald Reagan for a Supreme Court seat, but brought down in the Senate hearings when it was revealed that he had a friendship with Jack Ziegler, a wild-card former CIA agent now rumored to be an organized crime kingpin. When the judge dies of what looks like a heart attack and Ziegler turns up at his funeral, Tal is initiated into a quest to uncover mysterious "arrangements" his father made in the event of his untimely demise. Various shady entities observe Tal chasing down the judge's clues, which include a cryptic note ("you have little time.... Excelsior! It begins!") and derive from chess strategy. Meanwhile, Talcott is going through a rough patch: his wife, Kimmer, a high-powered attorney, is probably cheating on him, his Elm Harbor law school colleagues are suspicious of him and a fake FBI man is following him around. As Talcott digs deeper, he uncovers a vein of corruption that runs all the way to the top, and his own life becomes threatened. This thriller, which touches electrically on our sexual, racial and religious anxieties, will be the talk of the political in-crowd this summer. (June) Forecast: A dual main selection of BOMC, a main selection of QPB and an alternate selection of the Literary Guild, Mystery Guild and Black Expressions, this title should bring Carter the wide recognition he deserves as a novelist. (c) Copyright PWxyz, LLC. All rights reserved

Freed from the constraints of nonfiction, Yale law professor Carter offers scathing social commentary in his first novel. This suspenseful tale of ambition, revenge, and the power of familial obligations is set in the privileged environs of an Ivy League law school, Martha's Vineyard, and Washington, D.C. Oliver Garland is the demanding but emotionally distant patriarch of an elite, affluent African American family used to special privileges and close relationships with the powerful in government, business, and the criminal underworld. Oliver's death sparks renewed interest in his political career--as a vitriolic conservative, embittered by a failed bid for the U.S. Supreme Courtconcern in many quarters about "arrangements" he has made in the event of his demise. Garland's son Talcott, a law professor, is very reluctantly drawn into the intrigue. If he pursues the enticing mystery set in motion by his father, Tal risks his marriage, his career, even his life. And in the course of discovering his father's shortcomings, Tal must own up to his own. Legal minds and powerbrokers debate race, class, economics, feminism, abortion rights, morality, and religion as they jockey for position in the academy and on the bench and either foil or further Tal's efforts to solve the mystery of his and his father's lives. Despite Carter's disclaimer, some readers are sure to suspect this is a roman aclef with fascinating insights into the behind-the-scenes machinations of racial and power politics. An elegantly nuanced novel, with finely drawn characters, a challenging plot, and perfect pacing. --Vanessa BushAdult Books Young adult recommendations in this issue have been contributed by the Booklist staff and by reviewers Nancy Bent, John Charles, Tina Coleman, Patty Engelmann, Roberta Johnson, Judy King, John Mort, Shelley Mosley, Renee Saito, Regina Schroeder, Karen Simonetti, Candace Smith, and Beth Warrell. Titles recommended for teens are marked with the following symbols: YA, for books of general YA interest; YA/C, for books with particular curriculum value; YA/L, for books with a limited teenage audience; YA/M, for books best suited to mature teens.

This sleek, immensely readable first novel by Yale law professor Carter, author of such provocative nonfiction as The Culture of Disbelief (1993) and God's Name in Vain (2000), is custom-designed for the kind of commercial success enjoyed by John Grisham's The Firm 11 years ago. The complicated fun begins with the death of federal Judge Oliver Garland, a black conservative and former Reagan appointee to the Supreme Court-a nomination that fell through when a scandal linked Garland to "underground investment banker" Jack Ziegler, whose shadowy figure initiates the subsequent intrigues into which Garland's son Talcott (a prim law prof, and Carter's narrator) is swept up. Talcott's fiery sister Mariah insists that their father (a presumable suicide) was murdered. Initially unpersuaded, Talcott gradually becomes a believer as he's alternately stroked and betrayed by various colleagues and pols, stalked, shot at, and thunderstruck by what he learns regarding the (earlier) death of his sister Abigail in a hit-and-run accident, the Judge's mingled grief and fury thereafter, and the hidden agenda of Talcott's forceful wife "Kimmer" (Kimberly), an attorney hustling for her own appointment to the federal bench. Almost everybody is other than what he or she seems, including Talcott's feckless older brother Addison, NBA pro-turned law student Lionel Eldridge, liberal Justice Wallace Wainwright, an ebullient mystery woman named Maxine, and urbane black careerist Lemaster Carlyle. Prominent among the crucial narrative elements are a missing set of "arrangements" supposedly written by Judge Garland, a reputed hit man posing as an FBI agent, baffling references to (the unknown) "Angela's boyfriend," a chess problem known as "Double Excelsior," and several misheard scraps of information. Carter connects all this irresistible hugger-mugger with great skill, building toward a series of staggered climaxes that explode over the final 150 pages. Few readers will refrain from racing excitedly through them. A melodrama with brains and heart to match its killer plot. First printing of 500,000; Book-of-the-Month Club dual main selection; Quality Paperback Book Club main selection; Literary Guild/Doubleday Book Club/Mystery Guild alternate selection
More book reviews at iDreamBooks.com