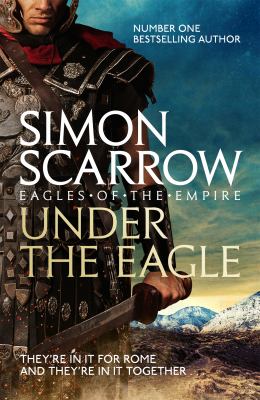 Under the eagle / Simon Scarrow.

| Rome (Italy) -- Army -- FictionSummary: Two Roman soldiers--battle-hardened centurion Macro and Cato, a new recruit--head for Britain with the invading Roman army in 42 A.D. where they will stumble into a plot to overthrow the emperor.
Tags from this library: No tags from this library for this title. Log in to add tags.
Fiction notes: Click to open in new window

UNDER THE EAGLE is the gripping first novel in Simon Scarrow's bestselling EAGLES OF THE EMPIRE series. A must read for fans of Bernard Cornwell and Conn Iggulden. Praise for Simon Scarrow's compelling novels: 'Gripping and moving' The Times

AD 42, Germany. Tough, brutal and unforgiving. That's how new recruit Cato is finding life in the Roman Second Legion. He may have contacts in high places, but he could really use a friend amongst his fellow soldiers right now.

Cato has been promoted above his comrades at the order of the Emperor and is deeply resented by the other men. But he quickly earns the respect of his Centurion, Macro, a battle-hardened veteran as rough and ready as Cato is quick-witted and well-educated. They are poles apart, but soon realise they have a lot to learn from one another.

On a campaign to Britannia - a land of utter barbarity - an enduring friendship begins. But as they undertake a special mission to thwart a conspiracy against the Emperor they rapidly find themselves in a desperate fight to survive...

Two Roman soldiers--battle-hardened centurion Macro and Cato, a new recruit--head for Britain with the invading Roman army in 42 A.D. where they will stumble into a plot to overthrow the emperor.